Ian Somerhalder has returned to television for another dance with the undead, but if you’re hoping for the second coming of Damon Salvatore, you might want to adjust your expectations. And then run for your life.

The vampires of Netflix’s V Wars — whose 10-episode first season dropped in full on Thursday — aren’t the smoldering sex symbols roaming the streets of Mystic Falls. “These vampires are different,” Somerhalder tells TVLine. “They’re not hundreds of years old, they’re weeks old, so there’s no historical aspect.” And while there are many different types of vampires on the show, as each person’s genetics determine their specific transformation, there’s one thing they all have in common: “Most of these creatures are really f–ing scary.” 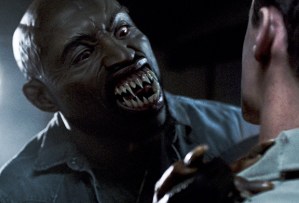 Based on the comics by Jonathan Maberry, V Wars stars Somerhalder (The Vampire Diaries) as Dr. Luther Swann, a scientist whose world is turned upside down when his best friend (played by Arrow‘s Adrian Holmes) is unwittingly mutated into a blood-sucking monster by a fast-spreading virus. Somerhalder says that the scientific aspect of the show is what makes it more “grounded” than your typical fanged fare.

“It deals with the things we’re dealing with in our own world right now: borders, racism, disease, fear, politics — the politics of fear,” he explains. “These things aren’t just happening in our echo chambers, they’re happening around the world. And [the vampire virus] comes about as a result of rampant glacial deterioration. Ice is melting and exposing pathogens, viruses and bacteria that could make the bubonic plague look like a chickenpox party.”

“Getting to play Damon Salvatore [on The Vampire Diaries] was the coolest thing in the world,” he says. “That was one of the best-written characters on television, and I mean that in all humility. It wasn’t about my performance, it was what was on the page, and I just worked my ass off trying to bring that to life. Coming out of that, I really wanted to play a character that’s just a normal f–ing awesome dude. To me, good husbands, great parents, scientists — those are superheroes, because of their dedication, authenticity and integrity. Luther’s a good, normal dude. But people don’t want an ordinary hero. They want an extraordinary hero. So the metamorphosis he goes through in a 10-episode arc is substantial.”

Go stream the first episode of V Wars on Netflix, then grade the episode below and drop a comment with your full review.