If Thursday’s Project Runway premiere was any indication, we’re in for a season of surprises. Not only did host Karlie Kloss blindside the 16 new designers with a team challenge right off the bat, but she also introduced the possibility of a “Siriano Save,” which allows mentor Christian Siriano to bring back an eliminated contestant he deems worthy of a second chance. The game has changed.

“Inspired by the space race,” the first challenge of Season 18 required the designers to pair up and design two different outfits to wear during an interstellar vacation, “a jumpsuit for daytime excursions and a chic happy-hour look for cocktails at the hotel bar.” The contestants were instructed to make their looks “complementary,” but were also warned not to lose their individual points of view.

Rather than sharing our initial thoughts on every designer — let’s be honest, it’s too early to get attached to anyone — let’s discuss a few of the ones that made impactful first impressions, for better or worse: At 64 years old, Nancy Volpe-Beringer is making Project Runway history as the franchise’s oldest competitor; Sergio Guadarrama, whose previous designs include Billy Porter’s 2019 Tony Awards ensemble, appears to have the biggest ego, as he declared, “I’m already at Brandon Maxwell and Christian Siriano’s level”; and Brittany Alan, who drives for Uber to supplement her income as a struggling fashion designer, is basically just living the plot to Disney Channel’s Raven’s Home, whether she realizes it or not.

In a not-super-surprising turn of events, Sergio’s confidence proved to be well-deserved, as he and Brittany were named the top designers this week. (Technically, Brittany was the real “winner” between them, receiving immunity from being eliminated next week. But they both contributed.) 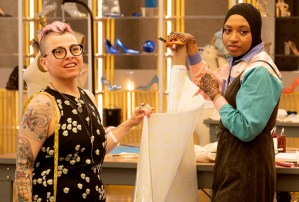 Unfortunately, every season of Project Runway needs to send someone home first. Or in this case, a pair of someones. After having their looks torn apart by the judges — Nina Garcia lamented the “abundance of ideas,” while Brandon simply exclaimed, “What in the actual hell!” — design partners Jenn Charkow and Asma Bibi were sent packing.

“I don’t think two people should have been eliminated,” Asma said on her way out. “I don’t think I should have went home. I don’t know what Jenn even has to offer. If we have to compare, [my look] was extreme and kind of crazy, but there was something to see. I feel defeated. That was not me at all.”

Jenn expressed similar frustrations, adding, “I’m feeling really sad. I really regret losing what I know I’m capable of. I wish I could have gone out being very proud of what I’d done. I quieted my intuition and I didn’t listen.” (Honestly, not enough people listen to their intuition. Jewel didn’t release that song for her health, you know. It was legitimately good advice!)

Do you think the right designers were sent home this week? And should Siriano have used his polarizing “save” on either of them? Drop a comment with your take on the Season 18 premiere — from its new designers to its new rule — below.