Oh, there will be Reprisal against some very bad men, and Abigail Spencer is gunning to deliver it via Hulu’s palpably pulpy hyper-noir revenge drama.

TVLine spoke with Spencer about the many, many “firsts” she experienced via a role so very, very different from what she has played on Mad Men and Timeless — and in what amounts to a female version of Tony Soprano.

TVLINE | … so you’re allowed a Disney+ reference.
It’s so crazy that all of it’s going to be out there on Friday, and it does feel a bit like a film, even though it’s a very long film. Maybe this is like an opening weekend, because it kind of has that energy to it. I haven’t seen all of it yet, but I’m just excited for where it goes. I feel really strongly about this character right now, in this day and age and this era, and bringing her forward into the world. I think there’s a lot of good that it will do, and a lot of release. We’ve got a lot of energy in the collective consciousness right now, and we need something really entertaining and really exciting and almost hyper-noir that we can put all the energy into. Every script that came in really reminded me of Mad Men, it’s such a cool mashup.

TVLINE | Is boiling it down to “a revenge drama” almost not really doing it justice, because there are a lot of different things going on here? Visually and tonally and dialogue-wise, I’ve never seen anything quite like it on TV.
Me neither. For me — someone who’s been acting for almost 20 years and really caught that wave of “the golden age of television” and found all of these great female roles — to have never seen a woman like this, to have never gotten to do anything like this, is pretty incredible. Plus, it was not adapted from a book, or a movie. It’s a totally original piece.

TVLINE | It’s so specific that when I was watching the first episode I assumed it was based on something. The world it has created is so rich and interesting.
That’s just based on Josh Corbin’s brain, and that is a fun place to be. He’s been living with this for nine years, and I think that’s why it’s got so much specificity. It’s really inspired by things in his life, and his imagination. I remember when they kind of pitched me the show and he showed me the visual conceit, I was like, “I’m in. I can do this.” The scary part was just like, “What do you think about me having a totally different look for Katherine and a totally different look for Doris? What do you think about this shift? What do you think about starting in blues and grays and really muted colors, and then by the end of Season 1 being in reds and pinks and black-and-white? What do you think about the merging of two women coming back together?” It just kept evolving.

I felt like that on Mad Men for the first time [where she played school teacher/Don Draper love interest Suzanne Farrell]. I was like, “This is television at its best, where your creator and your writer and your collaborator keep evolving as you create the thing,” and that’s really hard to do. 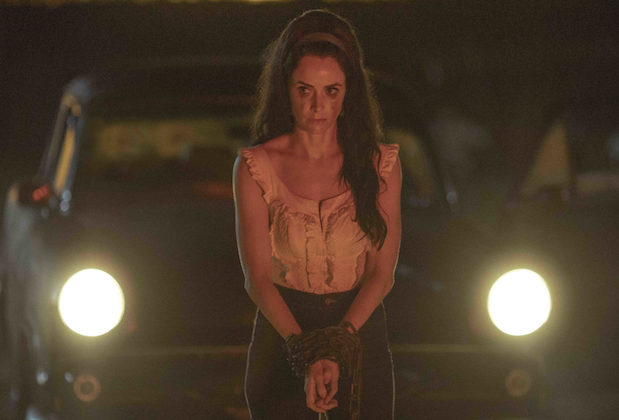 TVLINE | You worry me when you say Josh was inspired by things in his life. You’re not telling me he was chained to a truck and dragged…?
[Laughs] No, but he does have a very dear friend in his life that Doris is inspired by. She is the sweetest, most loving, most wonderful, most kind individual…. I’ve met her and it’s basically like, “What if we take that person and put them in a betrayal story?” It’s kind of a mashup of the imagination and the reality.

TVLINE | If we were to shoehorn in a very clumsy Timeless reference, this show is very “timeless” in its look, because you’ve got, like, 1950s muscle cars alongside cell phones.
Yeah. But if you notice, the cell phones don’t go past mid-’90s [styles]. People keep wanting to put me in the past! I have accepted that it’s part of my place on the planet, to “bring the past forward” and deal with era ambiguity.

TVLINE | We could even argue that All My Children‘s Becca Tyree lived in the past, because she was from backwater Pigeon Hollow.
[Laughs] She was old-school, that is for sure. Definitely a creature of a different time and place. I’ll tell you this: It doesn’t make it easy to make a television show, because you’re doing a lot in a very little amount of time and it does feel more like a film, but every day was incredible. In Episode 8, we visit Katherine in the past, we get a bit of her origin story, and I just love that episode. You’ll notice that every single beginning of each episode starts in the past so, you get a glimpse at who these people were before the moments that we’re at now. And in that episode, I look like I’m from the early-’60s/late-’50s, but when you meet Doris she looks like she’s from the late-’40s/early-’50s. As it goes along, you really see us start to play with the eras, too. Everything is very intentional and I’m very curious how everyone will receive it. 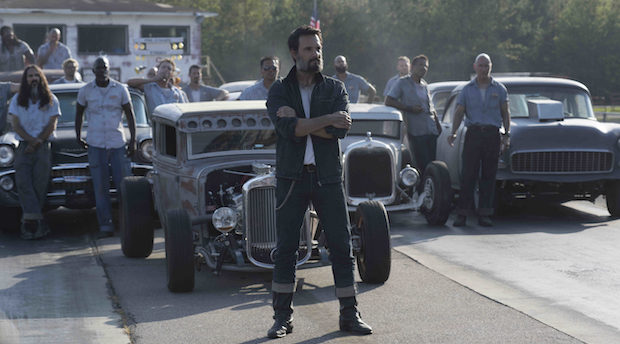 TVLINE | Tell us about some of the people in Doris’s life — whether they’re there for better or worse.
There’s Witt (W. Earl Brown), obviously, who from the Bang-a-Rang [burlesque club] world. He’s kind of a scout for the Banished Brawlers, and he’s really the one that brings Katherine back to the world that she left behind. There’s a long history between Queenie, who’s played by Lea [DeLaria] and is an incredible character. I love all the women on the show. Meredith (Madison Davenport) is supposedly [SPOILER REDACTED], so there’s a whole history there. Then there’s Joel, who’s played by Rodrigo, and Bash, who’s played by Gilbert…. They’re kind of the main villains in her life, but then you see it becomes about something much bigger.

So Doris gets a crew together, and that’s an “odd couple” situation. None of these people should be working together but they kind of become a gang and go on this whole journey together. It’s so unique. 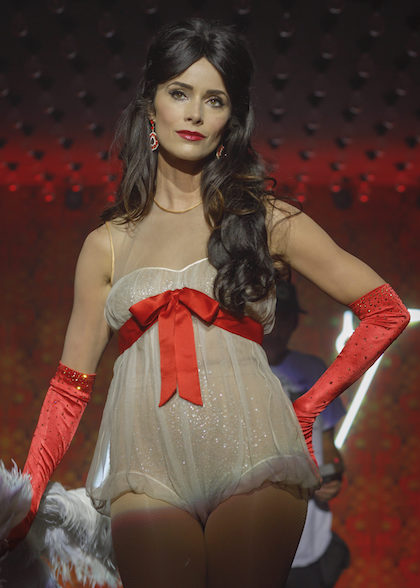 TVLINE | Speaking of the uniqueness, what is something that Abigail an an actress got to do for the first time with this role?
Well, I haven’t really played a full transformation role, with look and sound and aesthetic. I’ve never been blonde in a role. I’ve never used that part of my voice, very sweet and demure. I mean, that’s the thing — I was playing with the feminine and the masculine. She’s the Tony Soprano of the show. I remember in Episode 10, I came to set one day and Doris had been fully realized… and Wavyy [Jonez], who plays Cordell, was like, “Ohhh, you’re the don.” I’ve also never gotten to do burlesque on stage before [Laughs], and do 40 takes of a dance that I put together.

I also haven’t experimented with this much violence before. Timeless was an adventure series, but it was family friendly; this is definitely more of the Tarantino style of violence because it’s got a dark humor to it. I think it’s so interesting to have a woman at the center of it, because it really turns the genre on its ear.

And I’ve never played a femme fatale before. And I think it’s a very unique version of a femme fatale because Josh was very explicit that he didn’t want her to lead with her sexuality. She’s actually using being underestimated to her advantage.

TVLINE | On a completely different and lighter note, are you familiar with the Baby Yoda gif that’s going around, of him sipping soup…?
I haven’t seen it, but I was on Fallon the other night and John Boyega (Star Wars: The Rise of Skywalker) was on the show and they were referencing it. I go, “What’s ‘Baby Yoda sipping tea’…?”

TVLINE | Because I’m bingeing Reprisal, and there is Doris always with the two-handed tea-sipping. It’s uncanny.
[Laughs] That’s so interesting. Jonathan Van Tulleken, our director, is British, and Josh was like, “I don’t think she drinks coffee. I don’t think she drinks alcohol. Maybe she drinks tea?” So she’s always drinking tea. And we did it in a very specific way where it kind of became a sign that something brutal was about to happen. It’s almost very helpful with the tension of the show. That wasn’t scripted originally; it was something we found in the moment and it just became a theme in the show. I love it so much. 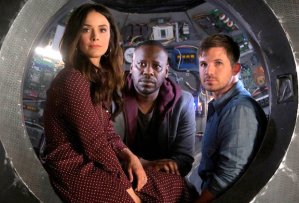 TVLINE | Lastly, what’s the outlook for any more Timeless? Or did last year’s movie tell the story we needed to tell?
Anytime anyone wants to get together to make another Timeless movie, I’m totally down for it. I have this joke that Lucy and Wyatt will have their walkers and it’d be the funniest thing ever…. I feel so ingratiated to our fan base and do indebted to them — it’s incredible — so if there were ever a moment and we could get everyone back together and it works, and it was met with support, I think it’d be fun to do another holiday movie.