This Friday on Hawaii Five-0 (CBS, 8/7c), Adam’s steamy shower with Tamiko (wait, what?) is rudely interrupted by some very dirty business involving Yakuza rivals. In the aftermath, Adam is sternly warned not to get involved in the hunt for Masuda’s kidnapped daughter, but that only forces the lawman to take a “sick day” — one that threatens to alter his life forever.

TVLINE | Tell us a bit about what sets Adam’s odyssey in motion this Friday night.
Well, as we’ll quickly learn in the opening teaser, the relationship between Adam and Tamiko (played by Runaways‘ Brittany Ishibashi) has advanced considerably. If you’ve been paying close attention, you know we’ve had a couple of scenes throughout Season 10 which sort of allude to the development of the relationship, but I don’t think we’ve ever seen it progress to the stage that it is here. That might come as a surprise, particularly to diehard fans of the Adam and Kono relationship, but yeah, things are getting hot and heavy. They are then surprised by some intruders who create havoc for both Tamiko and Adam, and that sets Adam off on a journey. It’s the beginning of what has been a really exciting serialized arc.

TVLINE | The sticky wicket, of course, is that Adam can’t involve Five-0.
Exactly. He’s sort of between a rock and hard place. Trouble typically seems to find Adam, and it’s found him once again in this episode. We’ve come to know Adam as someone who sometimes doesn’t make the most rational decisions, but here he is following his passion and that’s what leads him on this Man on Fire journey in this episode. He’s desperate to save his love, and he won’t let anything get in the way of that. 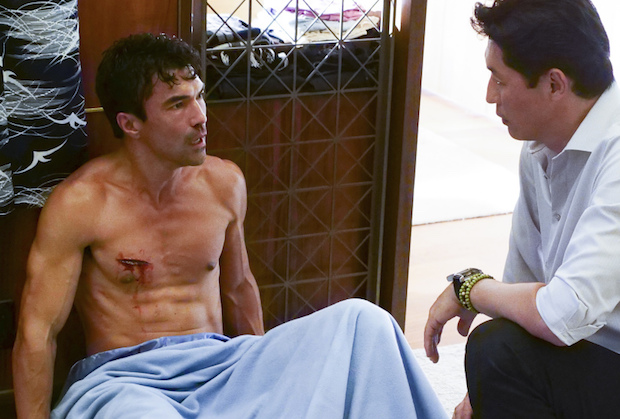 TVLINE | In a handful of episodes over the past season or so, you’ve established a certain dynamic between Adam and Tamiko’s father, Masuda (Sonny Saito). How would you describe it to date, and where is it heading?
I mean, it’s a bit testy between Adam and Masuda. And what Adam doesn’t want to necessarily admit is that Masuda has these theories about how Adam can’t escape his past, how he can’t ignore who he truly is. In Masuda’s opinion, Adam is someone who belongs in the Yakuza. Masuda has sort of had an eye on Adam as a potential protégé, if you will, someone who could ultimately replace him and take over the family business one day, but as we know, Adam’s been fighting against that part of his persona for years. Because of the events that happen in this episode, Adam is confronted by this ultimate prospect of giving into, I guess, the “fate” that has been predetermined for him. I think the audience will be very surprised about the decision that Adam ultimately makes.

TVLINE | How would you tease the final scenes of this week’s episode?
Well, Adam enters into this Man on Fire, stop-at-nothing journey to get Tamiko back, but I don’t think he ever intended for it to get as dark and twisted — to get to a point of no return — that it ultimately does. He has to go to the extremest of measures in order to ensure his, and more importantly Tamiko’s, safety moving forward.

TVLINE | When did [showrunner] Peter [Lenkov] first tell you this arc was coming up?
I had the good fortune to go to the Monte Carlo Television Festival during the hiatus, and before I went I called Peter to say, “Hey, what can I tease to the press about the upcoming season?” That’s when he told me I would be going on a journey not unlike Denzel Washington in Man on Fire. So when I got the script for this first episode, I was beyond excited. Even without having seen [the final cut] but just knowing how it felt filming it, I would say this is one of my favorite episodes in the history of my time on the show.