Like a facially reconstructed phoenix rising from the ashes, Alexis makes her long-awaited return to Dynasty in Friday’s fall finale (The CW, 9/8c), just in time for the trial of the century.

TVLine has an exclusive first look at Elaine Hendrix as the new Alexis Carrington, who clearly still knows how to make an entrance.

Friday’s episode, titled “The Sensational Blake Carrington Trial,” puts the problematic patriarch in the hot seat, and “every Carrington and family associate gets pulled into the fray.” Naturally, that includes Blake’s estranged ex-wife.

The role of Alexis, made famous by Joan Collins during the original Dynasty‘s run (1981–1989), was first played by Nicollette Sheridan on The CW. But when Sheridan abruptly left the show midway through Season 2, producers were forced to get creative. Through the magic of plastic surgery, Elizabeth Gillies — who already plays Alexis’ daughter Fallon — temporarily assumed the role, until Alexis decided that she needed a new start (and another new face).

Speaking of actresses who have previously played Alexis, we’re starting to sense a pattern (so to speak) in their entrance wardrobes. Hendrix’s black-and-white number looks like it was plucked from the same closet as Collins and Sheridan’s debut ensembles: 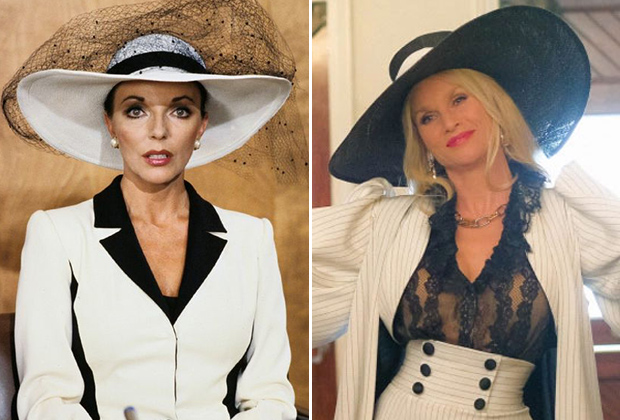 Beyond simply bringing Alexis back into the fold, Hendrix’s casting also doubles as a reunion; she and Gillies co-starred on FX’s short-lived drama series Sex & Drugs & Rock & Roll, which also starred Dennis Leary.

Your thoughts on Alexis’ long-awaited return to Dynasty? Season 3 in general? Drop ’em all in a comment below.