If The Voice’s Shane Q was trying to get eliminated ahead of next week’s Semifinals, his rendition of “Caribbean Queen” during the Top 10 performances the evening before sure seemed like a foolproof way to do it. If he’d sung that way during the Blind Auditions, he’d never have gotten a chair turn — even from coach Kelly Clarkson, who so often seems to swivel just because “Oh, I know that song! Must! Hit! Button!”

I knew going into Tuesday’s episode that yeah, yeah, Shane had surprised us before — more than once — and avoided elimination. But I think we were all pretty sure that what he did to Billy Ocean’s golden oldie was gonna sink him. More interesting was going to be seeing whether Team Blake Shelton’s Kat Hammock managed to remain in the competition for another week. Her whispery voice is an acquired taste, and she hadn’t used it well Monday. If she eluded the chop, it was gonna be a real testament to her coach’s popularity.

Before we found out which threesome were the lowest vote-getters, much less who won the Instant Save, we were treated to a cutesy reimagining of “Baby, It’s Cold Outside” by Kelly and fellow coach John Legend (on which he called her a Lyft rather than encourage her to spend the night, and she pretended not to notice that his jacket had a split personality); a funny visit from Making It’s Nick Offerman and Amy Poehler (during which they presented the coaches with a rustic new version of their iconic swivel chairs); and a pleasant-enough performance of “Wave” by Meghan Trainor and Mike Sabath (that involved some spectacular background dancing and Sabath dressed like a house painter). 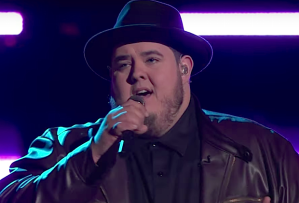 Shane Q (Team Kelly), “Killing Me Softly” — Grade: D- | Shane’s had a rough time of it on the show, so I wanted not to hate on him in what seemed destined to be his final performance. But oy, this was not good. An improvement over the abomination that was his “Caribbean Queen,” yes, but nonetheless not good. I couldn’t even call it OK karaoke. He was so off, he’d have barely made it through a Deaf Audition, never mind a Blind Audition. Hard to believe he was, as the show loves to remind us, a four-chair turn.

Joana Martinez (Team Gwen), “Somebody That I Used to Know” — Grade: D | WTF, Joana? She could hardly have chosen a song that was further from her lane if she’d consulted somebody else’s road map. Worse, she was pitchy for more of the song than she wasn’t. It was like she decided to take on a number that would play to her weaknesses. I didn’t imagine Joana would make the Finals, but it was still a bummer to see her going out this way.

Marybeth Byrd (Team Legend), “You Are the Reason” — Grade: B- | Shane and Joana had done so poorly, I figured all Marybeth had to do was not fall off the stage, and the Instant Save was hers. Happily, she did more than just remain upright. This was by no means her strongest effort — why didn’t she dig into the Bonnie Raitt songbook again? — but it showcased the emotional quality that she brings to her performances and included some moments of intimacy that were as delicate as a spider’s web. Not great, but pretty good — and so much better than her competitors that, when last we saw the tallies, she had 49 percent of the votes (vs. 27 percent for Joana; 24 percent for Shane).

What did you think of the Bottom Three’s song choices? And did our fellow viewers get the eliminations right? (Er, yes!) Vote in the poll below, then hit the comments.