This Sunday in Batwoman‘s fall finale, Alice finally hosted her “mad tea party” — from which one of her guests left in a body bag.

This time targeting the woman whose act of deception years ago stopped Jacob Kane from searching for his missing, presumed-dead daughter, Alice laid siege to a gala honoring Catherine Hamilton-Kane — hijacking the TelePrompTer to force out a public confession (about her tech company manufacturing bad guns that land in the hands of bad people), and then revealing that the guest of honor had been poisoned on her limo ride over.

But, twist! Mary had also sipped from the champagne that was tainted by Mouse-posing-as-Jacob, and Alice only had enough antidote for one person. So backstage at the gala, as she faded fast on the floor, Catherine urged Mary to take the cure — after which, with her final breaths, Catherine disclosed that she has known all along that her “influencer” daughter has been secretly saving lives at a speakeasy clinic.

TVLine spoke with fan favorite Nicole Kang about Mary’s current state of mind, learning of TV mom Elizabeth Anweis’ exit, and whether Mary’s personal beef with Alice would make her a fine recruit for Batwoman’s team.

TVLINE | What is Mary feeling, having just lost her mother?
I mean, to kill someone in front of your eyes… that is an unfathomable act of evil and wrongdoing. And Mary, you know, is a person who believes in good, someone who has an ungodly amount of empathy for others and who has so much room for forgiveness, so for her to witness this universally unfair, terrible thing…. There are no words.

TVLINE | Did you know From Day 1 that you’d be losing Elizabeth Anweis midway through the season, or did it catch everyone off-guard?
We all found out when we got the script, and it was devastating. We all called each other right after. It was just devastating.

TVLINE | On the bright side…. I thought it was nice that we learned Catherine knew all along that Mary was running the clinic.
Oh my God…. Such a surprise. Such a surprise. Elizabeth and I joked about our own Korean mothers, how they’re all about not talking much but knowing everything. Catherine knew to let Mary find her own path, that to really love a child is to let them live their own individual lives. But [that reveal] was an absolutely damning moment; I did not see that coming. 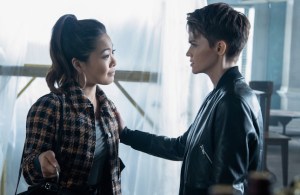 TVLINE | Might Mary’s newfound animus for Alice maker her inclined to ally with Batwoman — if an invitation is ever tendered?
Hell, yeah! When it comes to Batwoman versus Alice, she knows there is good and there is evil. She would freak out to be asked [Laughs], but of course she’d be thrilled.

TVLINE | Does Mary have any inkling at this point that her step-sister Kate is Batwoman?
No. No, no, she has no idea. She is understandably distracted right now — something just happened right in front of her and there’s not really room to think about who Batwoman’s identity could be. Besides, for the people in Gotham, these superheroes as well as these villains are as heroic and as scary as they are because we don’t know their identities. That is the norm for the people of Gotham.

TVLINE | Will this huge heaping of personal sadness dim Mary’s light at all?
You know what, I think she deals with grief in a really real way. She’s got to be in shock before it hits her. I think she’s in denial, and she wants everything to go back to normal. She’s trying to operate, like, “business as usual,” because it’s almost as if your body has to “catch up” with what your mind knows. It has to reverberate through her. But also, I watched one of my closest friends so gracefully, but unfortunately, lose her mother, and if anything it strengthened her character. What happens to a person is what happens to Mary.