The ever-irrepressible Harley Quinn makes her grand entrance this Friday on the DC Universe digital subscription service, while spitting out those choice six words. But make no mistake, that last word — like scores upon scores that follow — is not bleeped or otherwise censored in this TV-MA ‘toon.

“Look, I love going in the booth and screaming and cussing for two straight hours,” says Big Bang Theory alum Kaley Cuoco, who voices the titular villainess. “I usually do that alone in my bedroom, so I’ve been able to experience that in a whole other way.”

With Patrick Schumacker and Justin Halpern (of the DC Comics-based Powerless sitcom) serving as showrunners, Harley Quinn finds “Joker’s girlfriend” fed up with being described and dismissed as just that. So she breaks up with her “Puddin'” and ventures out to make her own name as a crime kingpin, assembling a crew of “the f–king worst” bad guys available.

Season 1 consists of 13 episodes, to release weekly every Friday (a la DC Universe’s Titans and Doom Patrol). But Cuoco in fact had a few of those first entries already in the can once she truly found Harley’s perfect voice.

“After a a few weeks, it became more manic and hysterical, so I wanted to go back and re-record [the earlier episodes] to make sure it was just as badass from the beginning,” Cuoco tells TVLine. 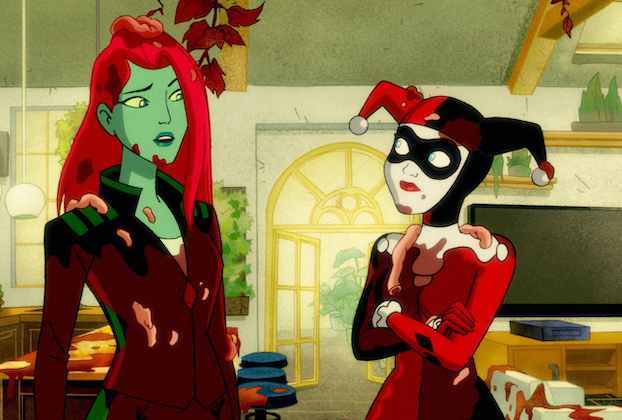 “I think with any character, especially when on a new show, it takes some getting used to,” she continues, describing voice acting’s unique process. “I’ve perfected certain looks and facial expressions over the years, so this in a way was harder — also because I’m voicing someone as iconic as Harley. And also, my voice is very recognizable, so I didn’t want to force an accent or try to be someone I’m not. I’m ‘Kaley as Harley,’ and accepting that early on enabled me to me free and very authentic.”

But was Cuoco prepared for just how “free” Harley Quinn would be with swear words, cusses, expletives and racy banter? (Episode 2, for example, has a subplot involving Penguin’s nephew’s bar mitzvah and… fingerbanging.) Did any of the dialogue, especially in aggregation, ever give her pause?

“Not for a second,” she asserts with a laugh.