This Tuesday on The Flash (The CW, 8/7c), the two-part fall finale gets underway via an intense face-to-face between Barry and Dr. Ramsey Rosso, who when last seen was looking quite worse for the wear as he abducted Ralph. Can superhero and supervillain talk things out before further more lives are sapped in the name of extending Bloodwork’s longevity?

TVLine spoke with Season 6A’s Big Bad, Sendhil Ramamurthy, about the showdown to come, what a certain NBC hero would think of Ramsey’s research, and more.

TVLINE | For the record, remind us what exactly Ramsey is doing with people and to what end. He, like, gloms onto someone with a gooey tendril and sucks their blood…?
Yeah, he basically gains life by their blood, because his blood has been contaminated by HLH.

TVLINE | And because they are scared to death at the time, their adrenaline-fused cells are the “secret sauce”?
Exactly. They have to be scared for their life in order for it to work.

TVLINE | While I appreciate Bloodwork wanting to take his big swing now, his timing kind of sucks. Team Flash is pretty busy dealing with other things.
[Laughs] I know. But this week is a direct pickup, right after I get my hands on Ralph…. 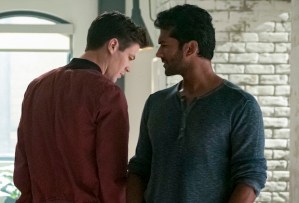 TVLINE | What is the nature of the Ramsey/Barry’s scenes in Part 1? I see photos of the two of you talking, and Ramsey looks normal and level-headed….
Basically, they’re kind of going through the same thing right now [trying to elude death]. This is a two-parter, and the first part is more about one long conversation between Ramsey and Barry, about their particular circumstances and why they find themselves in this situation. Sometimes when you get dialogue-heavy episodes in genre shows, it can get kind of monotonous. But here, because of the subject matter, and hopefully it performs well, I think it will be interesting TV to watch.

TVLINE | Might this turn out to be a Beauty and the Beast situation, where some well-chosen, comforting words from Caitlin can talk Ramsey off the ledge? Or is he just too far gone?
We’ll definitely see more of Caitlin and Ramsey. That relationship is special to Ramsey, it means something to him, so I think it would be safe to say there will be interactions between them, to try and rectify things. Whether Ramsey is too far gone or not at this point, is what we are waiting to see.

TVLINE | Because of the looming Crisis, will Iris have opportunity to react or get pulled into Bloodwork’s nefarious plans for The Flash?
She gets pulled into it, and in really cool way. I hadn’t had a chance to work with Candice [Patton], but I got the opportunity in these last episodes to do some fun stuff with her. There is one scene in particular that’s actually really, really touching, and Candice did a great job with it.

TVLINE | Tell me, when you are there on set, doing what will eventually be an effects-heavy scene, how ridiculous do you look jutting out your arm to mime your manipulation of goo?
Um, I’d say that on a scale of 1 to 10, it’s a 12. [Laughs] Im not going to lie to you, it feels pretty silly sticking your arm out and nothing’s happening. And you don’t know what they’re going to do, how it’s going to look…. It’s definitely a struggle sometimes, but Grant [Gustin] and I have a good time. We’ve both been doing the genre thing for a minute now, so we can appreciate the ridiculousness of that situation.

TVLINE | Plus, everyone has been there. I can just picture Danielle [Panabaker] “shooting frost” from her palms.
No, Danielle actually can shoot frost out of her hands. She is that talented. 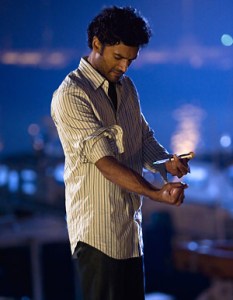 TVLINE | Do you think Heroes‘ Dr. Mohinder Suresh would be sympathetic to Dr. Ramsey Rosso? They are both about maximizing human potential.
Mohinder would definitely be sympathetic to Ramsey. And I think he’d really dig Ralph Dibny’s shirt game as well!

TVLINE | Give me one last tease about what’s coming up in these last two episodes of “Graphic Novel. No. 1.”
You can look forward to an epic confrontation between Ramsey and Barry. And it’s all obviously building up to the Crisis crossover and all that, which I think the fans are really going to enjoy. It has been a long time coming!