Ray Donovan waited until the final seconds of Sunday’s episode to resolve the big cliffhanger coming out of last week’s Season 7 opener. We’re referring, of course, to the fate of Jon Voight’s Mickey, who at the conclusion of the premiere appeared to have been blown to smithereens when the bus transporting him to a maximum security prison collided with a tanker truck.

After spending much of the hour trying — and failing — to make peace with his father’s death, a freshly off the wagon Ray is stunned to find Mickey standing in his doorway very much alive and, even more miraculously, sporting only minor
burns from a fiery crash that killed (almost) everyone on board the prisoner transport.

“Ray-Ray,” an excited Mickey blurts out upon seeing his son. The reunion triggers a very different reaction in Ray, who glares into Mickey’s eyes before punching him square in the face. Cue the closing credits. 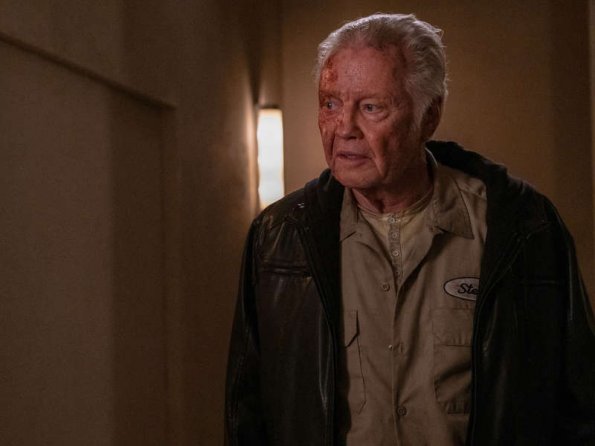 His survival now raises an even bigger question, and it’s one we hope Ray Donovan addresses in next week’s episode: How is it possible that a bound Mickey — in the span of a millisecond — was able exit the bus and clear the enormous blast zone before impact? Ray surviving that East River plunge is one thing. But Mickey walking away relatively unscathed from a bang as big as that veers into sci-fi territory.

What do you think? Is this twist destined to be inducted into the Jump the Shark Hall of Fame? Hit the comments!