Chicago P.D.‘s fall finale put one of Intelligence’s finest in the crosshairs of a life-and-death cliffhanger on Wednesday.

The episode finds Halstead kidnapped while undercover, along with Angela, the wife of Marcus West, the man whom Halstead wrongfully put behind bars, after which he was killed. That sets off Intelligence on a quest to find their colleague, with Upton particularly hellbent on rescuing her partner. She almost takes out her anger on a suspect, exclaiming, “Where is he?! He’s a cop. He’s one of us. Anything happens to him, that’s capital murder.” Then she warns the guy that he better pray to God that Halstead is still alive. Ruzek later finds an emotional Upton in the break room and reassures her that they’re going to find Halstead. 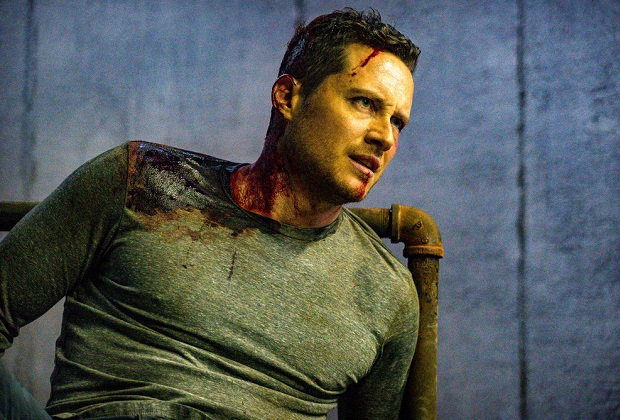 Halstead, meanwhile, is tied up, beat up and bloodied. When Marcus’ wife says she’s had nightmares about the boys Marcus killed and their mothers, Halstead confesses that he’s a cop and that Marcus wasn’t a murderer. When Angela found Halstead at her husband’s grave, she thought he was a decent man, but he’s actually been lying to her face all this time. Halstead explains that he was just following the evidence, and then he just wanted to make things right by helping her and her son. But that’s not enough to cleanse him of his sins, Angela replies. She plans to tell the bad guys who Halstead really is.

“You deserve to die,” Angela says.

“You don’t,” Halstead replies, urging her to be smart. If she says something, they’ll both be killed.

Thankfully, Angela listens to him, which allows Halstead to get out of his restraints and knock out the kidnapper just as Intelligence closes in on his location. Upton finds a badly injured Halstead. Time to rejoice, right? Nope! When Halstead goes back to check on Angela, she shoots him!

Chicago P.D. fans, what did you think of the episode? Grade it below, then hit the comments!