One couple was on the verge of splitting up during Chicago Med‘s fall finale, while another’s expected reunion didn’t go as planned.

Let’s start with “Chexton”: April finds out that she has a condition that means she’s going through early on-set menopause, and the chances of her getting pregnant are slim. April is distraught that she can’t give Ethan the baby he so desires. Her doctor advises her to discuss IVF with him — and soon. But when April goes home, Ethan is packing up for a six-week gig with the Navy, and the vibe between them is definitely tense, so she doesn’t say a word. Ethan later offers to go to the doctor to make sure he isn’t the problem, but that only upsets April, who says she’s sick of the pressure and that she doesn’t know if she even wants a baby anymore.

When a medical case divides Ethan and Crockett, April sides with the latter, causing another argument. “I don’t know what’s going on between us, but maybe it’s a good thing I’m going away,” Ethan declares. That gives her six weeks to figure out what she wants — and that could be Crockett, whom she kisses! “Are you sure you want to do this?” he asks April. 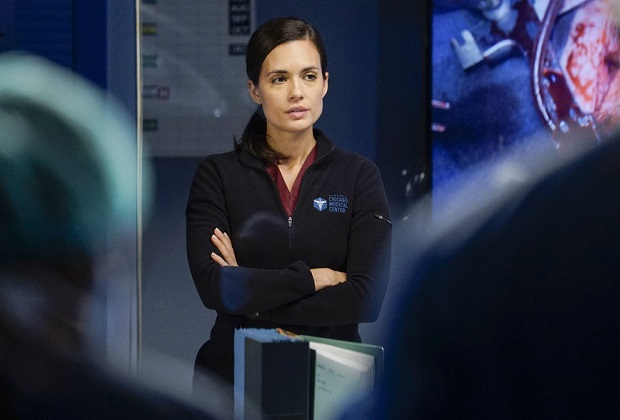 As for “Manstead,” Phillip’s daughter is in the hospital, and even though he’s not there with her — he left the child with his sister before taking off! — the situation alone is enough to spark bits of Natalie’s lost memories to come back. And just in time, because the truth is starting to come out about Phillip, and it’s ugly. Not only is he a pathological liar, he also signed a DNR order for his daughter Sophie. His brother-in-law isn’t surprised, explaining that in Phillip’s mind, “Sophie’s not perfect. That takes too much work,” and now that Natalie’s not in the picture, he doesn’t need Sophie. #PhillipIsTheWorst

When Natalie’s full memory returns, she realizes how unfair she’s been to Will. She seeks him out on the hospital rooftop and tells him she loves him. But she doesn’t get the response she expected: Getting out of her life has been good for him, he replies. They aren’t good for one another and keep hurting each other, he notes, adding that he can now imagine a future without her, and he feels free.

Elsewhere in the episode, Caroline has taken a turn for the worse. As Dr. Charles sits by her bedside, she tells him she wants him to remarry. He, in turn, throws a “bon voyage” party of sorts for his wife. Meanwhile, Maggie’s beau Ben is actually improving in a miraculous turn of events!

Chicago Med fans, what did you think of the episode? Grade it below, then hit the comments!