Chicago Fire‘s Stella Kidd is about to pay the price for taking on one too many gigs.

On top of being a firefighter, Stella is leading an academy class and is a manager at Molly’s bar. “She also is in this beautiful relationship with Severide that she wants to nurture,” her portrayer Miranda Rae Mayo tells TVLine ahead of Wednesday’s fall finale (NBC, 9/8c). And rather than requesting a day off, because that would be “showing weakness and discrediting Boden’s belief in her,” Stella continues to grind through her hectic schedule — to her own detriment.

“She is like a mule. She’s stubborn, and she’s going pull that cart until her heart gives out,” the actress adds.

Below, Mayo previews how Severide is there to care for his girlfriend and reveals whether Stella will get caught in the middle of the Dawson/Casey/Brett love triangle.

TVLINE | Does the fact that she is taking on all this responsibility, almost too much responsibility, put her position at the firehouse in jeopardy?
At the end of the fall finale, I think she might be afraid that’s what she’s done.

TVLINE | Severide has been so incredibly supportive of everything she’s been doing this season.
Right?! It’s like we want to check the back of his head like, “Are you a bot? Where is the plugin? You’re perfect.” He says all the perfect things. 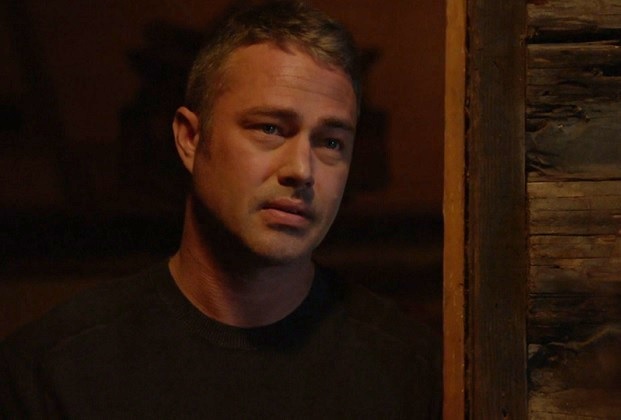 TVLINE | He keeps dropping these lines. I’m like, “Was he watching romantic dramedies over the summer?”
I know! I mean, she even says it. She’s like, “When did you get so good at knowing what to say?!” Oh, my god, he’s just been so beautiful, so supportive, and I think it’s so fun for all of us who love the show and have been watching it since the beginning to see this side of him. I think that Severide has been really scared to be this vulnerable with anybody, and I think it’s perfect that it’s Stella. They both have proven to one another that they’re there for each other, whether it’s in a romantic relationship or not. They just love each other. And they’ve also proven — at least she has — that like, “Hey, if it’s not working out, I’m not afraid to walk away. I will take responsibility for my own happiness and my own health.” So there’s a freedom that comes with that. I think that’s what enabled him, at the end of last season, to say, “You deserve a better man, and I want to be that man,” because she didn’t guilt him into it. It just was like, “This isn’t working. I love you, but I can’t be with you anymore.” The way that he’s behaving, it’s really fun to watch, because it’s from a place of enthusiasm. It’s from a place of authenticity. It’s not from this place of, “Well, this is how I have to act now.”

TVLINE | Are there any big moments for them in the fall finale?
You just see him care for her in a way that we haven’t seen before. A lot of times, she’s been there for him, catch[ing] him when he kind of spirals and falls. But we actually get to see Stella spiral, and we get to see him stand strong and be there, and it’s so beautiful. I’m so excited for fans to see the [episode]. There are just so many beautiful moments between her and him. There’s one in particular that I’m very excited about.

TVLINE | The fact that they’re at two different jobs, and he’s gone off to work at the Office of Fire Investigation, it’s not causing any sort of strain on their relationship, it sounds like.
No. At this point, she’s just wrapped up in everything that she has going on that she doesn’t have a lot of space within her consciousness to be worried or stressed about what he’s doing. And there’s this trust that has been established, and it feels sturdy. She just misses him. It’s more of a juvenile pout. She’s just like, “I want my boyfriend back.” But there’s nothing serious about it. And she understands; she’s supportive. She knows that he is such an excellent firefighter and member of the CFD, especially with OFI. They worked together on solving that case with the arsonist that had spanned over something like 10 years that his dad was trying to solve, and then [Severide] finally did [solve]. She sees how talented, how dedicated, how brilliant he is. She’s always just wanted the best for him, for him to thrive. 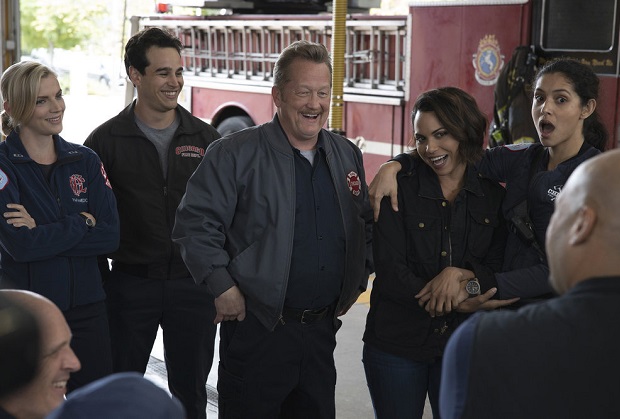 TVLINE | We’re welcoming back Gabby in the fall finale. What is it like to have Dawson back in the firehouse?
Oh, my God. The energy was just electric, having her back on set. It was really, really wonderful having her back.

TVLINE | How does the firehouse react to seeing her again?
I think Brett feels a little conflicted, and so does Casey, not only because of their dynamic, but just because of the way she left things. It was very abrupt and jarring. There is this managing of emotions that’s taking place within both Brett and Casey. So it’s like, “I’m excited, but ugh, I don’t want to get too excited, because you’ll probably just leave again.” Like abandonment issues. But everybody, more than anything, is just so happy to see her. It’s Dawson!

TVLINE | Stella has been pretty supportive of the idea of Brett exploring her feelings for Casey. So when Dawson comes back into the picture, does Stella get involved? Does it complicate things for her at all in terms of her friendships with Brett and Dawson?
No. She totally clocks it. But one of things that I really love about Stella is that, in her mind, the ideas are not mutually exclusive, where she’s like, “Yeah, I think that you can explore having a situation go down with Casey, Brett,” and also, “Yeah, Dawson, I’m really excited to see you.” I don’t know if they’ll show that in the edit, but when we filmed it, it was very clear that Brett was feeling conflicted, and Stella sees that, and it’s kind of like, “Aww, damn, that sucks.”

TVLINE | [Showrunner] Derek [Haas] has been teasing tears on Twitter. What do you think is going to make people emotional?
Oh, so many things!

TVLINE | Are those happy tears or sad tears?
A mix of both. Nothing as tragic as the way that we started the season. The writers can be cold, but they’re not cruel. [Laughs] They’re loving tears, tears of empathy, of really empathizing with the loss of Otis. That comes back around in a really beautiful way with some characters that you maybe didn’t expect, and you haven’t heard them be this vulnerable about the loss of Otis. And then also just seeing Casey and Dawson together again brings up a whole well of feelings and emotions. Those two actors, Jesse [Spencer] and Monica [Raymund], are phenomenal. They’re so brilliant. The chemistry between them, it’s a pleasure to get to watch what happens between them. It’s very real, it’s very grounded. Be hard not to cry or feel something when those two are on screen together.

TVLINE | And what kind of a note does the episode end on?
Like that deep sigh after a really good cry.