New Amsterdam‘s fall finale was full of good news and very bad news. Let’s start with the happy times, shall we? After worrying for most of the episode that his cancer had returned, Max learned he’s actually in remission! The future, however, looks far less bright for Dr. Helen Sharpe, who found herself stripped of her titles by the hospital board.

Meanwhile, Bloom wasn’t sure if she got high on pain meds or not, and Evie informed her fiancé Reynolds that she was offered a full-time job in San Francisco. On top of all that, some Rikers Island prisoners are planning to kill another inmate/patient in the hospital!

Below, showrunner David Schulner reveals what Max’s diagnosis means for his life and how he’ll react to Helen’s demotion. The EP also weighs in on Bloom’s hazy memory and previews the show’s upcoming lockdown.

TVLINE | This episode was a real turning point for Max in that he’s now in remission, and he’s reluctantly said goodbye to Georgia. How is that going to shape his arc going forward?
It’s probably the biggest shift we’ve had for Max. I don’t think we’ve given him this much good news at once ever in the life of the show. So I do see it as a huge turning point for him… It opens up all sorts of new possibilities in his life — life inside the hospital and life outside the hospital. It’s really going to shake his world. 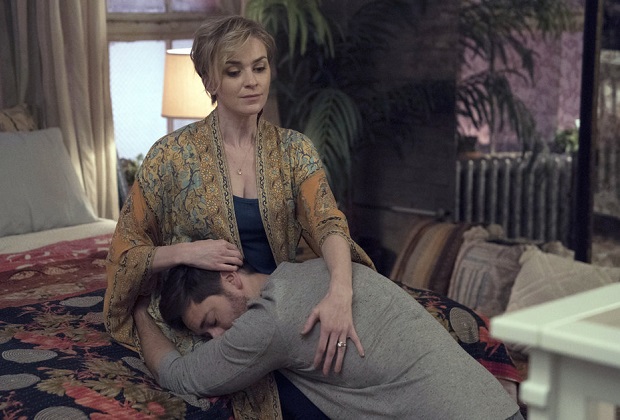 TVLINE | Is he doing anything differently, knowing that he has this second chance and he has to live it?
Absolutely. He knows that the way he has been living has been untenable and not sustainable. And now, like you said, reluctantly — and soon, hopefully, enthusiastically — he’ll embrace this new life that he has. It is a literal new lease on life, because of his diagnosis. And because he’s learning to grieve, and in that grieving process, letting go is a part of that.

TVLINE | Obviously, Georgia died fairly recently for him still. But is he starting to think about how he’s going to move on, and is there more love in his life still to come? Is that on his mind at all?
I think so. I don’t think it’s on his mind, but I think it’s coming whether he wants it to or not. How about that? [Laughs]

TVLINE | Max was having a lot of trouble this season opening up to Helen about what he was going through, and we’re starting to see that change. What does that mean for their friendship in the back half of the season?
They’re back to being each other’s person. All the work she did, trying to get him to open up, has paid off, and he’s going to be as open with her as he used to be, knowing that the burden of guilt and grief is dissipating. 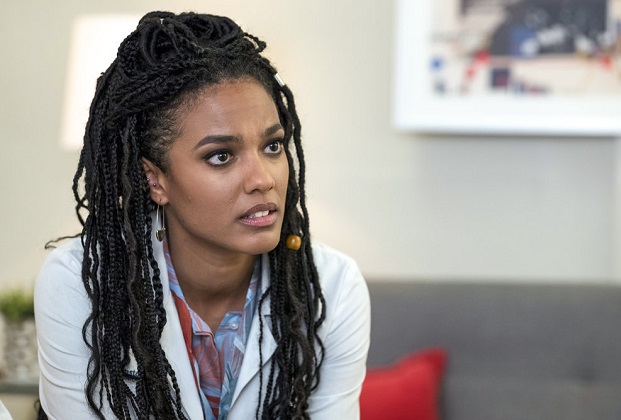 TVLINE | In this episode, we also saw Helen stripped of her titles as co-chair of the oncology department and deputy medical director. Can she still practice as a doctor at New Amsterdam?
She sure can — if that’s what she wants to do. But that has way bigger implications than that. The next episode, Sharpe is going to be questioning whether or not she should stay here or move on.

TVLINE | Did Valentina set up Helen to get in trouble with the board?
Whenever I tell bedtime stories to my daughter, she always asks questions about the characters’ motivations, and I have to admit I don’t know their motivations,because they didn’t tell me. So please, at the risk of getting mad at me like my daughter, I don’t think Castro set her up. But I will say she’s going to take advantage of the situation.

TVLINE | And I imagine Max will not stand for the board’s ruling.
Max won’t have a choice. Whether he wants to stand for it or not, there’s no choice to be had on his part. All he can do is convince Sharpe to stay, but he better give her a good reason to stay.

TVLINE | This cliffhanger that you’ve set up is potentially a very dangerous situation and could cause a lot of havoc in the hospital when you come back. Can you talk about what the doctors are looking at with this situation?
Reynolds has a life-threatening surgery to perform during a lockdown, which is dangerous in itself. If they need blood, they’re not going to get it. If they need a general surgeon to scrub in, they’re not going to get it. So Reynolds has this entire surgery on his shoulders, coupled with the fact that the person Reynolds is operating on is the prisoner the inmates want to kill. The woman who turned state’s witness, Fran, is Reynolds’ patient. So we know that they’re coming for her, and Reynolds is her only line of defense.

Max and Sharpe are going to be dealing with the other prisoners and trying to figure out how to protect their staff, while at the same time dealing with the fallout of the escape. And then Bloom and Ligon are also thrust in an impossible situation, where Bloom, who is incapacitated because of her own surgery, is going to have to perform surgery on someone else in an impaired state. Everyone has their cross to bear. 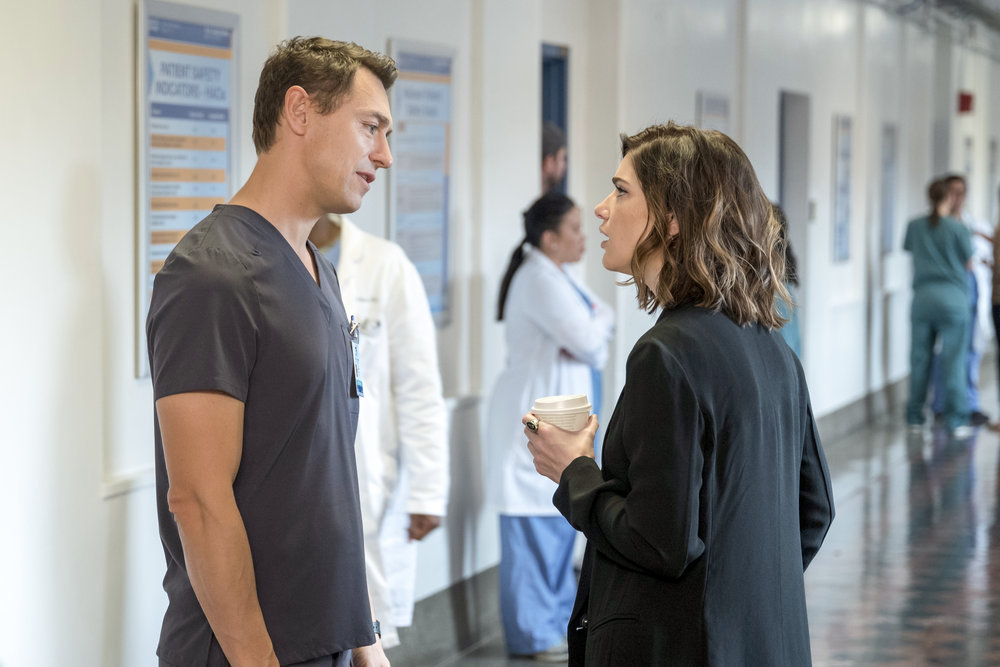 TVLINE | Dr. Ligon says to Bloom that some addicts get high and some blame other people for their mistakes, and that she did the latter — or was it both at once?
Correct. So is she blaming someone else for her mistakes? Or is she just high because she forgot she took the pill? Or is she doing both? Bloom doesn’t know who to believe. Did he take the pill, or did she take the pill? What I love about that scene is that some people truly think that Ligon took that pill and is gaslighting her, while other people honestly believe that the burden of proof lies on Bloom herself, that she doesn’t know who to believe. Does she believe Ligon, or does she believe her own hazy, at best, memory of it?

TVLINE | It is very ambiguous. Are you planning to give a more definitive answer?
You get an answer in Episode 10, absolutely. 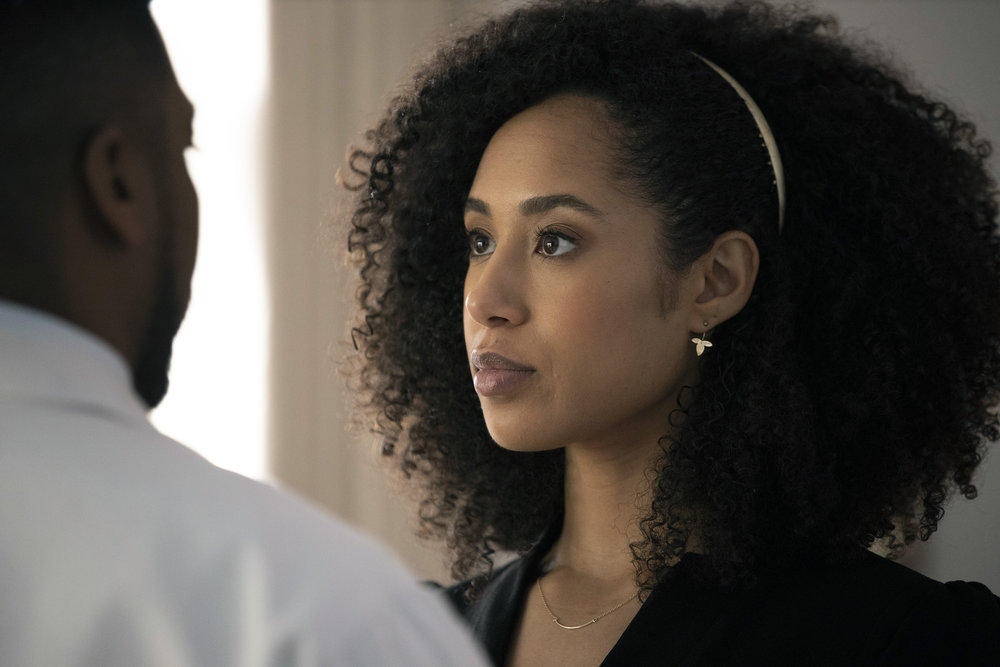 TVLINE | Do Floyd and Evie still have a future together after this episode?
A huge future! Massive future, definite huge future. Big future. [Laughs] We want a wedding. We want it to happen. I hope they get it.

TVLINE | Where would you put the odds of her staying in New York versus taking that job in San Francisco?
I’d put it at 50/50. I think she’s at the place where [she’s wondering], why is she being asked to sacrifice for her career and not Reynolds? Why should the burden be on her?

New Amsterdam fans, what did you think of the episode? Grade it below, then hit the comments!