This week on The CW’s Arrow, Oliver gave Mia and William the 10-cent tour of Russia’s seedier side, while Diggle dug up an old friend. In the end, who betrayed the team on behalf of the Monitor?

After giving Mia a primer on tennis ball-impaling and specialty arrows, Oliver learned that their target in Russia is a Alexi Burov, a general who is working on a pulse wave generator weapon for which he needs plutonium. While Diggle sets out to raid the plutonium storage site on the border of Bailya, Oliver invites Mia and William to join him and Laurel for the Russia op. Before leaving, Laurel learns that Lyla is in cahoots with the Monitor, though Dig’s missus argues that what they are facing is “bigger than any of us.” Laurel then agrees to her Earth Two-reviving marching orders: steal the weapon plans before Oliver does. 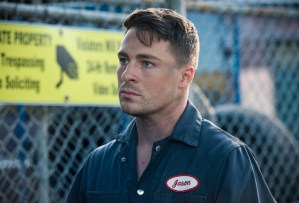 Diggle meanwhile tracks down auto shop wonk “Jason” aka Roy, whom he invites to help him with the plutonium run. Roy insists he is not hero material anymore, given his “condition,” but agrees to a one-time assist, after which he will disappear to where no one (not even William) can find him. Later, after they both suit up and arrive at their target, and after Roy repeatedly wonders aloud why he was needed for this mission, Dig details the future for Roy. How he sought exile on Lian Yu, yet Felicity believed in him enough to send William to find him. Then, working alongside Future Team Arrow, he learned how to be a hero again and help save Star City.

In Russia, Anatoly leads Oliver to General Burov, who’s enjoying some cage fighting at the Bloodbath. Burov says he has abandoned his weapon project but has the plans on a hard drive. But in trade for them, Oliver must liven things up at the club by taking on (and beating) the best, and large, fighter. Oliver does just that, but before he can claim the hard drive, Bratva heavies get the drop on a nosy Mia, and then shoot Burov dead. Oliver and Mia are tied up and forced to disclose what is on the hard drive. The Bratva boss then frees Mia and challenges her to best several of his men within 60 seconds, then ring a bell — which she nearly pulls off. Because William was able to hack CCTV cams and track them down, Laurel arrives on the scene with Anatoly and saves the Queens.

Once Anatoly gets wind of when the Bratva plans to sell the weapon plans (at Bloodbath, of course), Oliver devises a plan in which he and Mia will fight as a team, creating a distraction during which Laurel will steal the hard drive. But to get the duo into the cage, William must whet the booker’s appetite by pitting them against six men. Oliver and Mia get the job done, whaling on and besting the half-dozen fighters, while Laurel (with an important assist from Anatoly), reclaims the hard drive. Afterward, back at Anatoly’s bar, Oliver toasts his two kids, before inviting them to ask him anything about his dark times in Russia, on Lian Yu, or anything else.

Back in Star City with the purloined plutonium, Diggle thanks Roy — who has decided to stick around and help battle the “space god.” After all, he argues, if teamwork is destined to put him on the right track in the future, why wait?

Laurel meanwhile has a Star City rendezvous with Lyla, only to declare that she will not be joining her and the “cosmic fashion tragedy” she is in cahoots with. Laurel urges Lyla to tell her family the truth about what she is up to, but Lyla defers, “Not yet.” That response, Laurel quips, will make this next part “awkward”… seeing as Diggle and Oliver are arriving behind her, looking gobsmacked. Before John can begin to discuss his wife’s betrayal, he, Oliver and Laurel all are tranq-darted by someone. “What have you done?!” asks Diggle of Lyla, before he and his friends pass out.

What did you think of the episode “Prochnost”?