There was never any doubt that Sean was trying his best, and he gamely smiled through all of the judges’ harsh critiques each week. But as Monday’s semifinals got underway, it was refreshing to see all of the remaining couples genuinely crush it, which is exactly what should happen when we’re seven days away from handing someone the Mirrorball.

That said, not all semifinals performances were created equal on Monday — and the elimination at the end of the episode was easily the season’s most emotional. Let’s recap what happened during the broadcast:

Lauren Alaina and pro Gleb Savchenko
Lauren and Gleb kicked things off with a paso doble redemption dance, which showcased Lauren’s physical strength and command of choreography. I still think she needs to work on losing herself in her dances; Lauren always seems incredibly aware that she’s performing a routine, and you can practically see her sketching out the dance in her head as she does it. Fortunately, the couple’s Viennese waltz gave her a chance to slow down and elongate her movements — and since she had such a personal connection to the dance, she seemed so much more at ease, and that made all the difference. Judges’ Scores: 27/30 and 27/30

Kel Mitchell and pro Witney Carson
First up was a tango redemption dance for Kel and Witney, which was certainly an improvement on the first time they danced that style, but was ultimately not particularly memorable. (The thing I actually remember most is Kel’s bizarrely blank expression for the first two-thirds of the dance, which was not quite as intense as he may have intended.) But their contemporary, which honored victims of gun violence (including a friend of Kel’s), was simply gorgeous. The routine included a number of difficult lifts and tricks, including a pose near the end of the number that had to be so carefully grounded, lest Kel or Witney lose their balance and topple over. But Kel handled all of it with strength and elegance, even while overcome with emotion. Judges’ Scores: 27/30 and 30/30 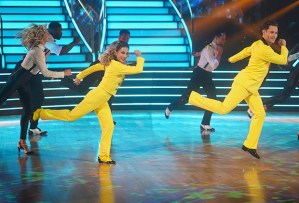 Ally Brooke and pro Sasha Farber
Real talk, Dancing fans: When it comes to Ally and Sasha, I’m just not seeing what the judges are seeing. Their Viennese waltz was plenty lovely and emotional… but I sincerely cringed through parts of their Charleston, and I was shocked that none of the judges had even a small critique. Ally briefly blanked on some arm movements toward the start of the dance (leaving her out of sync with Sasha for a beat), and the rest of the routine was peppered with moments where she was a hair behind her partner, or simply not bringing as much energy to the dance as he was. The choreography here was certainly challenging, and Ally did a solid job — but I’m not convinced they deserved 10s across the board. Judges’ Scores: 29/30 and 30/30

James Van Der Beek and pro Emma Slater
James and Emma first showcased a cha-cha redemption dance, which oddly featured some of the exact gimmicks that Len Goodman didn’t enjoy the first time around. (I do, however, think it was a little late in the season for Carrie Ann Inaba to suddenly call out James’ “broken” posture. You’ve had weeks to do that, woman!) But somehow, James pulled off a stunning foxtrot later in the episode, even though his wife had suffered a miscarriage just days ago. With all of that emotion fueling his performance, James’ foxtrot was intense, but incredibly gentle all the same. As for the moment where he carried his weeping daughter to the Star Lounge after the dance? It. Broke. Me. Judges’ Scores: 24/30 and 27/30 (…the latter of which seems a little insane, given the circumstances)

Hannah Brown and pro Alan Bersten
First, Hannah and Alan performed a rumba redemption dance, which featured much stronger hip action than the first time they performed that style. (And, thankfully, “Hold On” by Wilson Phillips was not the soundtrack this time around.) But their contemporary was even more impressive; Hannah pulled off some beautiful lifts and highly ambitious dips in this routine, and I was glad to see some sadness and anger etched on her face as she communicated the heartbreak of her Bachelorette season. (Boo, Jed!) Judges’ Scores: 27/30 and 27/30

ELIMINATED
James Van Der Beek and pro Emma Slater (despite a sobbing Ally attempting to give the finale spot to James, which was brutally sad to watch)

Your turn! How do you feel about James and Emma’s elimination? And who are you hoping wins the Mirrorball next week? Drop a comment below!