When last we tuned into The CW’s Arrow, Oliver Queen and his grown-up daughter-from-the-future had a not-so-happy family reunion, given how he had to leave both Mia and Felicity behind to fulfill his mission for the Monitor.

As the farewell season resumes this Tuesday at 9/8c, with Episode 5 of 10, father and daughter are forced to attempt some sort of bonding in the course of a trip to Russia, to fetch some plutonium (as one does). Will Oliver develop a certain regard for adult Mia’s own vigilante skills, paving the way for a détente? TVLine invited Katherine McNamara to preview the family not-a-vacation ahead…. 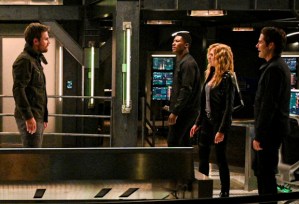 TVLINE | I felt bad for you in the last episode, because I assume that, inside, you wanted to play a warm, fuzzy, father/daughter reunion. But instead you had to play Mia’s not-so-simmering resentment.
Well, it’s true, and that speaks to the internal dichotomy of Oliver/Mia because for her entire life, the one thing she’s been lacking and been desiring is those connections with her father. She is missing a piece of who she is. And his choices, to be a hero and save the city as opposed to being there for his family, are the reason that she has to be difficult.

TVLINE | Given how things ended in that episode, are we going to get sliiiightly warmer moments between them moving forward?
Slightly. Slightly. But tensions are running high in the multiverse at this point, and anything could get in the way of that. Also, Oliver’s not used to having his kids around when he’s “working” per se. He’s not used to having to think about their well-being in the midst of battle. That presents an opportunity for their relationship to change, but it’s also an opportunity for Mia to show off what she does best in front of her father, which is a welcome surprise on his part.

TVLINE | What did you think the very first time you read the scene where Mia squared off with her dad, saying, “I was trained by Nyssa al Ghul”?
That was so fun for me. I had a great time on that scene with Stephen, because that moment is the epitome of who Mia is. Her realm of strength is her training, her fighting, and when she feels vulnerable, she will immediately go on the defensive as opposed to working through it in an arguably healthier way. She would rather fight her way out of a situation no matter who it is, and I think that moment for her is when she was at her most vulnerable — that’s the first moment that Oliver really sees the ramifications of his choices. Yes, he was protecting his family, but at what cost? 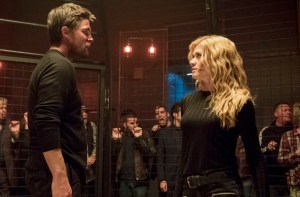 TVLINE | What is going on in this week’s episode, “Prochnost”?
So, this is one of my favorite episodes of the season, largely because when I watched the show, I was such a huge fan of Anatoly, and getting to work with David Nykl for an episode was a dream come true. [Laughs] But also, it’s the first time you really get to see Mia and Oliver interact one-on-one for an entire episode. You get to see both of them “on the job” and whether or not they see eye-to-eye. They’re both used to being in charge, they’re both used to being the one with the plan and the one who carries it out, and they’re similar in how strong they are, so moving forward it’s a bit of a power struggle. But also, you get to see a bit of their banter for the first time and that comes from the fact that Mia’s sense of humor is very similar to Felicity’s. So those interactions become really interesting, and I think, you know, harken into the spirit of Arrow, as it were.

TVLINE | I don’t suppose Mia picked up any Russian there in the year 2040, did she?
Not Mia. But somebody certainly did….

TVLINE | At the end of the last episode we saw a Monitor approach Laurel and make a pretty enticing offer. Is anybody on the team going to get a sense that Laurel is grappling with an internal conflict?
I… don’t think I can actually talk about that. But Laurel does wrestle with that, and actually there’s a really lovely scene with Mia and Laurel in this episode. But Mia has bigger fish to fry in this episode; it has certainly become an emotional struggle, as well as a physical one, to make it out alive, and it’s the first opportunity for Mia also to show her dad what she does best. She takes every advantage to show off her skill. Whether or not she succeeds is a another story. 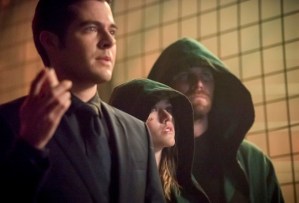 TVLINE | What do you want to say about this photo from the episode, of you and Stephen wearing robes….?
Well, it wouldn’t be Russia without a fight in a cage! If you have a couple of Queens there who happened to be rather skilled at fighting, I mean, it would be just a lost opportunity if we didn’t throw down.

TVLINE | I keep a pretty close eye on the fight scenes, and they’ve been pretty fantastic this season. What have you, Katherine, learned along the way? Like, what’s the fanciest thing you can actually do?
Well, I think in this episode I do the majority of my own fighting. There was one piece which had a couple of aerial tricks where I, you know, don’t have that skill set, but the rest of the actual fighting I was able to do this episode, and I absolutely love that. I take every opportunity to do that when I can. That all comes from Shadowhunters — I had incredible stunt coordinators on that who trained me extensively and took advantage of my long legs and made sure I was a kicker and made sure I could use these skills not only for that job but for future jobs as well. That has served me very well here, and I’m so thankful for that Arrow stunt team, as well, because they’ve given me the opportunity to use my skill set. It’s been a great partnership throughout.

TVLINE | That’s so funny, because I was going to totally joke with you about whether being “75 percent legs” is any kind of a hurdle for you. But it sounds like it actually works out for you.
[Laughs] It depends. It depends. In certain situations, it’s very helpful. In other situations, I’m Bambi. But I’ll take what I can get.

TVLINE | When I spoke with Charlie Barnett (who plays JJ/Deathstroke) a couple of weeks ago, he said pretty much nothing about the backdoor pilot episode except that he’s in it. Can you share a bit more?
[Network publicist on call intervenes, slams down the Cone of Silence] No. I can’t really say anything. I can say it’s really exciting and it’s very different, and there are going to be a lot of things that are quite unexpected within that.