According to The New York Times, writer Broti Gupta alleged that Hunt touched her inappropriately on two separate occasions. The first incident occurred at a cast and crew dinner in August, when Hunt allegedly hugged Gupta twice from the side, then complimented her pants and ran his hand up the side of her thigh. Later that night, Gupta discussed the incident with her boyfriend, fellow TV scribe Greg Gallant, and actress Dylan Gelula, who confirmed their conversations with the Times. 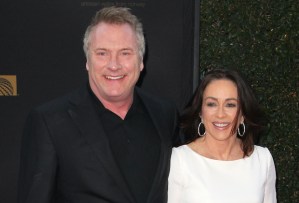 Heaton with husband David Hunt in 2016

Weeks later, on the set of the Carol’s Second Act, Gupta was seated in a chair next to co-executive producer Margee Magee. Hunt, who was supposedly looking for something, approached Gupta, took her by the shoulders and jerked her forward — at which point Magee leapt up from her own chair and said, “Excuse me.” Hunt did not respond.

In statements provided to the Times, Hunt’s lawyer Bryan Freedman claimed that his client “does not recall rubbing anyone’s thigh or leg and he disputes that characterization of it.” Hunt also “does not remember the detail of touching anyone’s shoulders, and if he did that, it was not intended to be offensive,” Freedman said.

Following the on-set occurrence, Gupta told Magee about the initial inappropriate touching. Magee went with Gupta to discuss the matter with showrunners Sarah Haskins and Emily Halpern, who subsequently reported the allegations to CBS Television Studios. During a follow-up meeting with an HR exec, Gupta was adamant that she did not want Hunt kicked off the show, but instead educated on harassment.

The following week, Gupta and Magee learned that they were barred from the sitcom’s rehearsal because the previous run-throughs were “too chaotic.” They were also informed that they would no longer be able to run revised jokes by Haskins and Halpern on tape night. Both Gupta and Magee believed that the changes were put in place to separate them from Hunt, while a letter from the showrunners’ attorney claimed that those changes were decided upon before Gupta’s complaint.

After speaking with Haskins and Halpern, Magee strongly believed that the changes had been put in place to separate Gupta from Hunt. Gupta subsequently quit, in part because the new policies had penalized her fellow writers.

“To be clear, we have never done and would never do anything to penalize or retaliate against anyone who raised these concerns,” Haskins and Halpern said in a statement to the Times. “We are devastated that many of the inflammatory claims that have been made about us are simply not tethered to the reality of what happened.”

When Gupta resigned, Magee met with HR brass to express her concerns, after which she was stripped of nearly all writing responsibilities and was led to quit as well. CBS maintains that there was “no evidence” that Haskins or Halpern had “retaliatory intent.”

Gupta and Magee worked out an agreement with CBS to be paid only what they were owed under their contracts. Hunt, meanwhile, underwent sexual harassment training, which was completed on Oct. 1.

In addition to serving as an EP on Carol’s Second Act, Hunt is an actor whose credits include episodes of 24, Blue Bloods, Castle, The Comeback and Mad Men. He also had a recurring role on Heaton’s former sitcom Everybody Loves Raymond, as Ray’s nemesis Bill Parker.

You can read CBS Television Studios’ full statement on the matter below:

A claim of unprofessional behavior was made by a writer regarding one of the show’s executive producers. The complaint was reported by a producer to the showrunners, who immediately alerted the production company and the Studio. The matter was promptly investigated by human resources, and appropriate action was taken to address the complaint. The executive producer cooperated fully with the process.
In addition, we looked into allegations of retaliatory conduct by the showrunners at the time they were raised, and we found no evidence of retaliatory intent in their interactions with the writer or the producer. In particular, their decisions about the writers’ procedure during rehearsals and tapings were creatively motivated to streamline their production process and were already being discussed prior to the complaint.
Further, our human resources team always endeavors to address issues in a professional and sensitive manner, and we must clarify that certain allegations about them have either been misstated or taken wholly out of context.
The writer and producer decided to leave the show of their own accord. CBS agreed to their request to be paid for the remainder of their guaranteed episodes this season, and we supported their request to waive any contractual provisions that would prevent them from speaking about their experiences on the show.