“Thank you… Kate.” With those three words, The CW’s Batwoman (airing Sundays at 8/7c) added Sophie Moore to the very short list of people who know the true identity of Gotham’s new vigilante. But will Sophie rush to share the intel with Crows boss (and Kate’s father) Jacob Kane? Will she sit on it a bit? Or is there a third possible option?

TVLine spoke with Meagan Tandy about Sophie’s choice, how new flashbacks will shed new light on the break-up that broke Kate’s heart, and much more.

TVLINE | Sophie seems to know who Batwoman is. What will she do with that information?
She wants to get the information to Jacob, but she hasn’t had the opportunity to do so, because she has been questioning it. She at first was like, “OK, I know Kate is Batwoman, but I’m not sure…” But when Kate put her finger right up to Sophie’s lips, after the fight with Mouse, that moment really sank in for Sophie. “No, it’s her.” She really felt it in that moment. And now that she officially thinks that she knows, she’s trying to get that info to the commander.

TVLINE | And she has no reservations about doing that? Even after Mary just chastised her about betrayals?
She definitely does not want to betray Kate or Batwoman, but the underlying thing for Sophie is that she really is concerned about Kate’s well-being. She doesn’t want her to go off and get killed. It’s not like, “Hey, Jacob I know who Batwoman is!” She wants him to know because she thinks Kate is going to die, because it is a risky thing she is doing. Because she cares about her — and probably still loves her — she wants to protect her. 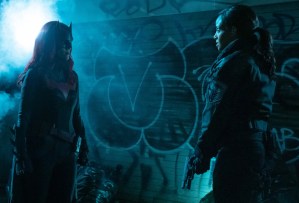 TVLINE | What do you think Sophie thinks about the whole Batwoman thing? Her ex wearing head-to-toe Kevlar-and-rubber, running around in a red wig….
I’m pretty sure there’s a part of Sophie that finds it to be very sexy. [Laughs] But she’s also just alarmed. These first seven episodes, at least, play the note that Sophie is scared for Kate, so I’m not sure she’s at home like, “Oh, that’s so cool!” She’s more afraid for Kate.

TVLINE | I have frankly been wanting to feel a lot more inner conflict from Sophie, after reuniting with this woman whose heart she broke years ago. Will we see more of that this Sunday?
Oh, yes. You are absolutely going to finally see Sophie literally break down, because she is dealing with not only these realities about Batwoman but now she is also being questioned about, “Why did you do that back during military school?” And not only that, now her husband is like, “Hey, tell me the truth….” There are three different things going on in Sophie’s world, and she has to deal with them all in 42 minutes on Sunday. 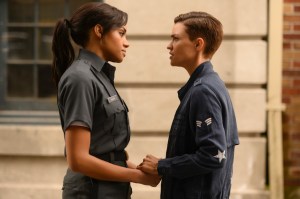 TVLINE | There is that moment in the military school flashbacks where Kate is like, “Tell me I’m wrong about you loving me…,” and Sophie says, “You’re wrong” — which was damn cold. Will we get more insight into what was happening in that moment?
You will get some additional flashbacks. In fact, you go back to Point Rock where there will be further scenes explaining what happened before and after they had that moment. 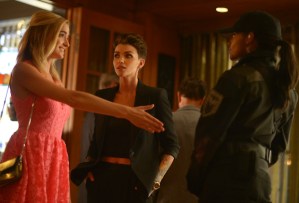 TVLINE | What was going on in Sophie’s mind when she saw Kate with Reagan for the first time?
Oh, she was absolutely jealous. I think that although Sophie is currently not living her truth, she doesn’t want to see the love of her life off with anyone else. So by seeing Reagan, it was a definite symbol of, “Hey, she’s moving on.” So there was jealousy but also more fear — that I’m about to lose this woman.

TVLINE | Let’s talk about the husband thing: How do you label Sophie? Is she bi? Or is she “lesbian, in denial”?
I feel like she is likely lesbian, in denial. But it’s kind of hard, because I feel like she kind of fits two or three different categories, honestly. And I think that within her, she’s also trying to figure it out, because she did marry her husband, but she did have this relationship with Kate…. So, I don’t think there is an exact label. There are two or three different ones she could be.

TVLINE | What is the coolest thing you have gotten to do in your Batwoman role?
I’m always going to take it back to the fight sequences. I’m a very active person in general, and any time I get to get up there and do any kind of a fight sequence, I’m just on Cloud 9, it is so, so much fun.

TVLINE | Lastly, your Halloween photos on Instagram suggest that you are good friends with The Flash‘s Candice Patton, one of my most favorite people, and Riverdale‘s Vanessa Morgan. Any early theories on how your three characters could share a crossover?
Oh my goodness, we would absolutely love that. We were joking, “We need to have a crossover of our own!” I would love to put that idea into [Arrowverse executive producer Greg] Berlanti’s mind.

TVLINE | Was there supposed to be a theme with your costumes? Because Candice and Vanessa were dressed as evil queens, but you were… Sexy Woody?
[Laughs] The theme was actually “Disney, But Gory.” So I was supposed to put bullet holes in my costume, as if Woody lost a shoot-out, but…

TVLINE | You dropped the ball.
I dropped the ball, yes. I didn’t want to be a princess, and my typical thing is to dress up like a guy or somebody scary, and Woody was it!