Kat Dennings is Dollface — but don’t you dare call her that in Hulu’s surreal new comedy series, which made its debut on Friday.

In the first episode, Dennings’ Jules is at brunch with her boyfriend Jeremy (Connor Hines) when he unceremoniously breaks up with her after five years, bluntly stating, “I don’t love you anymore.” Jules is at a loss, especially since her life has completely revolved around her beau for half a decade. They’ve hung out together every day, and their plans are all related to his work, his family, etc. What is she to do now? Jeremy tells her it’s time for her to go back to hanging out with other women.

Jules gets on a bus driven by an old cat lady — like, she has a cat head! — which is full of crying, brokenhearted women. Along the way, they pass a desert full of guys’ girls and a Rebound Town stop, before arriving at a terminal for women returning from relationships. A loudspeaker announcement instructs the women to reconnect with their girlfriends and proceed to emotional baggage claim, but there’s no one waiting for Jules. At Information, she’s told that there’s a hold on her account as a woman. The Information lady asks if she’s slept with a close friend’s boyfriend or made any comments about a politician’s inability to lead due to her menstrual cycle. Nope, the issue is that all of her personal relationships have expired. 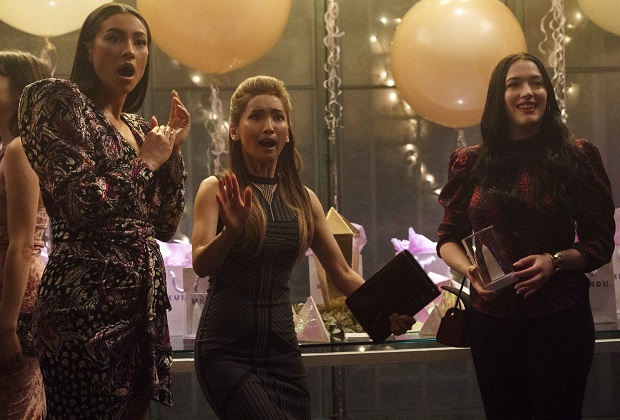 So Jules reaches out to her former friends Madison (The Suite Life on Deck‘s Brenda Song), who is dubious of Jules’ desire to reconnect, and Stella (Pretty Little Liars‘ Shay Mitchell). The latter pal advises Jules to get out of her comfort zone and invite Madison to a party. Lucky for Jules, she works at a Goop-like company called Woom, and they’re throwing a launch party for their new product. After approaching the cool girls at her office (all named Allison and featuring two Crazy Ex-Girlfriend vets), Jules scores invites for herself, Madison and Stella.

At the club, the girl group tropes abound — they all have to go to the bathroom together — but there’s also an undercurrent of real hurt: Jules didn’t even know that Madison’s mom got sick. Then Stella goes missing after getting into a van with a weird man. While attempting to track her down, Jules runs into Jeremy, who offers her a ride home and calls her “dollface,” but she tells him she’s always hated that nickname and leaves with Madison in search of Stella. In a surprise twist, they find Stella at a cheesy restaurant with… Dave Coulier?! And he just wants to give her financial advice?! After bringing a drunken Stella back to her place, Madison goes to sleep in the matching Spring Break T-shirt she told Jules she had tossed, so there’s hope yet for this friendship.

What did you think of the premiere of Dollface? Grade it below, then hit the comments!