Thursday’s Legacies revealed that someone at the Salvatore School is not who they appear to be — which is saying a lot, considering a good portion of the student body is made up of literal werewolves.

While Lizzie and Hope battled their way through an alternate reality based on the hits of the 1980s (killing a minotaur in the process!), their fellow classmates navigated a different type of battlefield at the Salvatore School’s ’80s decade dance. Most notably, Josie and Landon almost had sex for the first time, though Josie pumped the brakes when she discovered a song Landon wrote for Hope in Penelope’s magical spy journal. (That thing just keeps coming in handy, doesn’t it?)

Meanwhile, Sebastian tricked Wade into freeing his physical body from its tomb of desiccation (no thanks to MG and Kaleb), and Headmaster Vardemus was revealed to be — wait for it — Clarke in disguise!

Below, executive producer (and this episode’s co-writer) Brett Matthews breaks down the week’s biggest twists, from Vardemus‘ Buffy-esque reveal to Josie’s impending meeting with… Freya Mikaelson?

TVLINE | This was one of those episodes that proves Legacies can get away with anything. Where did the inspiration for the video game world come from?
I wrote the episode with Thomas Brandon, and we’re both kids of the ’80s. As soon as we knew we were doing a decade dance, we thought, “This is the era we’re most comfortable with.” And once that concept crystalized, we tried to infuse the episode with as much of it as possible. Evan Warner, who cut the episode and is a brilliant editor on our show, really pushed the video game aspect of it. Between him and Barbara Brown — who has directed some wonderful episodes of ours, including the musical one last year — we just really went for it. A lot of the stuff skews more towards movies of the ’80s, and that’s because Thomas and I are products of that. We’re in this business because of the movies we saw in the ’80s as kids.

TVLINE | Plus, the game gave Hope and Lizzie perfect outfits for the dance.
Yes. Actually, this was all a long ploy to get Matt Davis into an Indiana Jones outfit. The world needed to see that.

TVLINE | And we thank you for it. Hope and Lizzie made for an interesting pair. What made Lizzie the perfect person to remember Hope first?
The perfect person is often the worst person, right? We asked ourselves, “Who is in the most complicated and interesting scenario if they remember first?” Given everything that’s going on between Josie and Landon, Lizzie was the perfect person. Hope is her frenemy and she has an allegiance to her sister, so putting Lizzie right in the middle of that scenario just felt right.

TVLINE | I love that they hugged at the end. Any chance for that friendship — or at least that truce — to stick?
I think so. I think they’re friends. They’re combative and whatever, but that’s just high school. In my mind, they’ve always been friends, but they’re reluctant to admit it. I’ve enjoyed watching the evolution of that relationship, and it’s one that will continue to evolve.

TVLINE | I’m into the idea of Hope and Rafael. Any chance we’ll explore that relationship now that Hope is letting Josie and Landon do their thing?
It’s complicated. Raf does have feelings for Hope, and in a world where Hope is seemingly free and available, he would want to explore that, of course. The question going forward will be whether she can truly move on from Landon. That will take place over the course of the next few episodes. 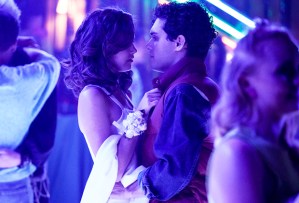 TVLINE | Take me inside Josie’s head. Is she worried Landon is developing new feelings for Hope, or is she just starting to put the pieces together?
She’s starting to put the pieces together. It’s very much on the front of Josie’s mind, and it’s something she feels she needs to get to the bottom of. Heading into the next episode, you may see Josie go as far as to New Orleans to solve this burning question. (Editor’s note: I guess we’ve finally ID’d the person Freya was talking to in that first-look photo!)

TVLINE | Switching gears, are we to assume that Vardemus has really been Clarke this whole time?
Yes, he has!

TVLINE | I was pretty shocked by that. Were there hints I missed along the way?
Pretty shocking, right? It’s something we’ve known all along, and there was the occasional breadcrumb, but the reality is that Clarke has done a good job infiltrating the school. His plan will be laid bare over the next couple of episodes. In our minds, you’ve never met the real Vardemus, only Clarke.

TVLINE | Does he have the power to absorb people like Malivore?
Well, what do we know about Clarke? We know he’s, in fact, the son of Malivore. Why he’s in the state he’s in, as well as what that state exactly is, will be a question that gets answered in the very short term.

TVLINE | Another person I don’t trust is Sebastian. Will he harbor a grudge against MG and Kaleb for not helping him?
I think Sebastian harbors a grudge against the modern world. That’s really his story. The fun of this character is that he’s a vampire that’s kind of from the old show; Sebastian and Damon Salvatore would have had beers and been totally cool. The world has changed so much, in many ways for the better, but it’s also gotten worse in other ways. He’s sort of a character from The Vampire Diaries, but the world has shifted under his feet. What it means to be a vampire on this show is not what it used to mean in The Vampire Diaries. This show is not a gothic romance, but Sebastian is ripped from that world, so his frustrations lie in the modern world. That’s something we’ll dive into. You’ll learn a lot about Sebastian, including where he comes from and why he feels the way he does about the world.

TVLINE | And will any of that involve him continuing his relationship with Lizzie?
A lot of it will. That’s going to be a really important relationship this season. They have amazing chemistry, and Thomas Doherty is a pleasure to work with. We’ll find out how he really feels about her, as well as how she really feels about him. Lizzie’s very conflicted about what he means to her and to her mental health.

Your thoughts on this week’s Legacies? Did anyone else get Buffy vibes (“Ben is Glory, Glory is Ben!”) from that big Vardemus reveal? Whatever’s on your mind, drop it in a comment below.