TV’s tireless effort to bring back each and every ’80s and ’90s show that you even sort of liked continues with a new revival of Mad About You, debuting Wednesday, Nov. 20 exclusively on Spectrum’s on-demand service. You remember Mad About You, right? The pleasant enough 1992-99 NBC sitcom that starred Paul Reiser and Helen Hunt as a lightly bickering married couple, and was fortunate enough to air during the heyday of Must-See TV? Yeah, it’s back. Is it any good? Well… as I watched the first four episodes made available for review, I found myself pondering instead: Was it ever any good?

Because even the first time around, Mad About You was just kind of fine, you know? Never as daring or groundbreaking as its channelmate Seinfeld, it was content to just be a punchline delivery system, heavy on ’90s New York sarcasm, and a showcase for Reiser and Hunt, who always had a nice banter between them. It was just good enough to get you to not change the channel before Frasier came on, and that was good enough to earn it a healthy seven-season run. But nobody ran to get home in time to watch Mad About You, right? It was always the ultimate C-plus TV show — and so it’s fitting that the revival is pretty much more of the same, for better or worse. 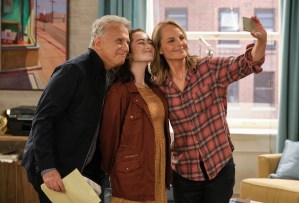 Reiser and Hunt return as Paul and Jamie Buchman, 20 years after we last saw them: still married, still living in that same impossibly spacious apartment, but now facing old age and an empty nest, with their daughter Mabel leaving to attend college at NYU. Well, yes, her dorm is only five blocks away from their apartment, but Paul and Jamie are still suffering just the same. Reiser and Hunt are seasoned pros, of course, and they seamlessly slip right back into the same well-worn sitcom rhythms that worked so well for them before. Reiser is especially good here; his rapid-fire neurotic noodlings can spin laughs even out of mediocre material. (Listening to Paul rant about matcha is oddly soothing.)

Mad About You always worked best as a two-person show, though, and the addition of Mabel as a full-fledged character alongside Paul and Jamie is an awkward fit. (Landline‘s Abby Quinn does what she can with a limited role.) Plus, as a parent of a college-age child, Jamie is obnoxiously overbearing, which doesn’t really fit her personality from the original series. (She was always the one talking the more anxious Paul off the ledge.) Hunt isn’t served particularly well here in general; Episode 3 has her sweating ridiculously in a hacky menopause subplot. And the show’s attempts to step into the modern era are CBS-level clumsy, like when Paul has a cringe-worthy run-in with a classroom full of woke NYU students. 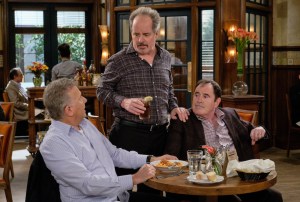 It works best as cozy TV comfort food, and it’s smart enough to stay in that lane for the most part. We get to reunite with old friends like Jamie’s sister Lisa, Paul’s cousin Ira and the Buchmans’ pal Mark, played by national treasure Richard Kind, who continues to be a delight in everything he’s in. (As soon as Mabel leaves home, Mark arrives at Paul and Jamie’s door with a platter of bagels and lox, shouting, “A child leaves home, it’s like a death!”) There’s no Lisa Kudrow cameo reprising her role as loopy waitress Ursula, sadly, but the Buchmans do get a new dog to replace their adorable mutt Murray — who was probably the highlight of the original series, if I’m being honest.

None of this is great art, by any stretch… but I still found myself feeling a certain affection for it. Episode 4 in particular, which finds Paul and Jamie arguing over him not offering her a toothpick after a meal, is vintage low-stakes situation comedy. Maybe it’s just the ’90s nostalgia talking, but with all the exhausting twists and serialized storylines that TV shows throw at us now, it’s kind of nice to relax with some mild, palatable laughs served at a leisurely pace. This is the kind of show you can doze off for a few minutes while watching and not miss anything important… and I mean that as a compliment. Reiser and Hunt’s veteran presence and the nostalgia factor help nudge it slightly above your standard sitcom, and maybe that’s enough to earn a spot on your holiday watch list. (If you’re a Spectrum subscriber, that is.) As Paul might say: You could do worse.

THE TVLINE BOTTOM LINE: Spectrum’s Mad About You revival is the same mildly pleasant sitcom you remember from the ’90s… for better or worse.