This week on The Good Doctor, tension builds between Drs. Lim and Melendez. Can their personal relationship withstand their professional one?

Episode 7 marks a breaking point for the couple — though the words “we should break up” are never said out loud. We pick up the morning after Melendez lost pregnant patient Patricia Fields. Lim tells her boyfriend that what happened to Patricia was not his fault. “She knew the risks, and she made a choice to save her baby,” Lim says. “I bet she’d make the same choice again.” Unfortunately, there’s no way either of them can know this for sure, and it eats at Melendez throughout the hour.

At the hospital, Melendez, Shaun and Park work on Tara (Chasing Life‘s Haley Ramm), a young woman with severe combined immunodeficiency — aka “Bubble Boy Disease.” She comes in with infected tissue on her right lung, which requires an operation. During the procedure, Melendez hesitates to make the first cut, and Lim takes notice. She encourages him to talk someone, but he says he’d prefer to focus on his current patient, rather than his previous one.

After the surgery, Tara spikes a fever and begins to show early signs of sepsis. Park thinks they can do more than just treat her infection, and pitches Melendez on gene replacement therapy. If it works, she’s cured; if it doesn’t, she dies, and Melendez isn’t feeling particularly lucky these days. When Park tells Lim that Melendez rejected his gene therapy idea, she confronts Melendez and tells him that he can’t dismiss a plausible treatment option out of fear. The benefit of the cure may be worth the risk, she says, and permits Park to present the option to Tara. The patient doesn’t think it’s worth it; she’ll still be a “freak,” she says, and she’ll never live a “normal” life. That’s when Shaun interjects and manages to change her mind. “I’m a freak, too,” he says. “People have called me that because I am not neurotypical, and I used to be alone, like you. Sometimes that was easier because it’s hard to be around people when you’re not like them. But now I have Dr. Glassman, and a roommate who is a girl, and a girlfriend who is only annoying some of the time, and I think it is better than being alone.” Melendez gives Shaun and Park the go-ahead to prep Tara for gene replacement, and warns Park about what’ll happen if he ever goes over his head again. The transfusion is ultimately a success, and Tara is given a hopeful prognosis.

Lim, meanwhile, asks Glassman to have a word with her boyfriend. The hospital president approaches Melendez and makes clear that it was Lim that wanted them to talk. The surgeon tells his superior that he’s fine, but he’s unconvincing. Glassman tells him that it’s OK if he’s not. Sure, Melendez has lost patients before, but he’s never lost a patient that should’ve lived. “You’re not fine, if for no other reason than your boss doesn’t think so,” Glassman says, “and the bigger problem is your girlfriend doesn’t agree with her.”

Later on, Melendez pops into Lim’s office and tells her that she’s right. He’s not fine, and he does blame himself for Patricia’s death. “The blame lies with me, but the responsibility is ours,” he says. “You’re not objective about me because of our relationship. If we weren’t together, I’m not sure you would have agreed to let me do that surgery… You thought I could do it, [and] that’s the problem. I think your personal feelings may have led you to overestimate me.” Melendez continues, saying, “it’s not about fault, it’s about being aware so that this doesn’t happen again.” But that’s impossible, given the current dynamic. “It will happen again,” Lim says. “I will make decisions. You will have bad outcomes. hat’s doesn’t mean that either of us was wrong. My approval had nothing to do with our relationship.” Melendez remains unconvinced. “If we weren’t dating, that woman may still be alive, and we both have to live with that,” he says. Later that night, he returns home without his (ex?) girlfriend. He takes out his phone to call her, but it goes straight to voicemail. Rather than leave a message, he hangs up and finishes his drink. 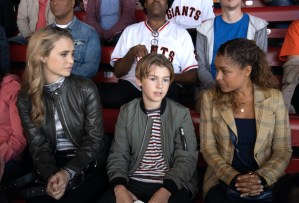 The other Patient of the Week is 12-year-old Charlie (The Twilight Zone‘s Kiefer O’Reilly). He manages to sneak away on the day that he’s supposed to undergo enucleation — aka the surgical removal of the eye — and Morgan and Claire leave the hospital to go find him. They track him down at a San Jose Giants game, where Morgan catches him eyeing a ‘tween ballpark vendor. She encourages Charlie to confront the young lady, but he chickens out at the very last moment. Still not ready to give up his vision and go blind, Morgan and Claire try to fulfill some of the kid’s wishes. First, Morgan lets him drive her car around an empty parking lot. Afterwards, they take him to a strip club so he can see a naked woman, but the bouncer refuses to accept a cash bribe. Charlie begs the residents to try one more strip joint before they head back, but Claire says enough’s enough. “You can’t pack a lifetime of things you’re going to miss into one day,” she tells him. “Your situation sucks, and it’s unfair, but you know what? Life sucks and it’s unfair, and things end before we’re ready.”

Soon after, Claire apologizes to Charlie. She tells him that she lost somebody recently and it hurts — a lot. She took it out on him and that’s unfair, but if he doesn’t have this surgery, he’ll miss out on a whole lot more than what his vision can offer. “You won’t ever drink another slushy at another baseball game, or feel the wind in your hair when you speed down the road, or… touch a naked woman,” she says. “I knows this sucks — it really, really sucks — but it will get ‘less sucky,’ and the part that hurts so much right now will start to hurt less. And life goes on and you will have wonderful moments and you will have sucky moments, and it will be your life. It will be a good life, Charlie. I suspect it might even be a great life.” It’s Claire’s pep talk that convinces Charlie to return to the hospital. Before Andrews and Morgan wheel him into the O.R., Morgan tells the attending that she forgot to take Charlie’s vitals, and says she’ll wheel him right out. She then closes the curtain and fulfills Charlie’s last wish by flashing her boobs. When she wheels him out, Andrews asks if his vitals are OK. “Temp might be a little up, but he’s ready now,” she says. (Heh!)

Charlie’s procedure is a success. The kid thanks Morgan for everything, but when he calls out to Claire, she’s not there. She’s already left for the night. Morgan catches up to her at a bar and commends her for what a great job she did with their patient. Claire says that she said what she had to get him back to St. Bonaventure, but Morgan refuses to let her downplay her efforts. “You connected with him,” she says. “You were your old self again.” Claire argues that “my old self was always there for everyone, just giving away pieces of herself over and over,” only to get nothing in return. “It was a hell of a day,” Morgan responds. “The blind kid didn’t get me depressed. You, on the other hand? Deal with your crap before this is who you really become.” 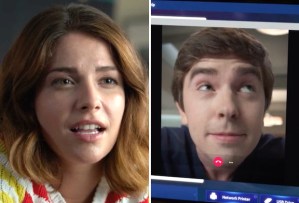 * Carly is away at a conference this week, which presents a new hurdle in the #Sharly relationship: text-messaging! Shaun is under the impression that he doesn’t have to answer Carly’s texts if she doesn’t pose a question. When he doesn’t reply and receives a “face with rolling eyes” emoji, he FaceTimes Lea at work and asks what it means. While his roommate does her best to advise on the matter, it’s his patient Tara who ultimately gets through to him. She explains that it’s not about how he responds to Carly; she just wants to know that he’s there. In the very last scene, he takes out his phone and messages his girlfriend: “I’m here,” he writes.

* Debbie oversteps her bounds on her first day as Glassman’s new assistant/office manager. She interrupts him while he’s with a patient, and again when he’s conversing with Dr. Lim. Later, she takes it upon herself to upgrade his computer software without asking him first, at which point he loses his cool. She quits when he raises his voice to her, but agrees to come back after he returns home and apologizes.

What did you think of The Good Doctor Season 3, Episode 7? Hit the comments with your reactions.