Another bizarre season of Dancing With the Stars is swiftly approaching its end — and when I say bizarre, I don’t just mean the “Sean Spicer is still on?!” kind of bizarre (though that is still very much a thing… well, until you get to the bottom of this recap, that is).

Rather, this Dancing cycle has also been missing a few themes that had previously become staples of the show. I can’t be the only one bummed that there was no Most Memorable Years Night this time around, right? And no Trio Night? Even when it’s given us dances like the Lindsay Arnold-Jordan Fisher-Corbin Bleu salsa that I still watch once a week? For shame.

That said, Monday’s quarterfinals — aka Boy Band and Girl Group Night — were still a lot of fun, and not just because guest judge Joey Fatone prompted a lot of “You guys were so in sync!” jokes. Let’s recap the evening’s routines:

James Van Der Beek and pro Emma Slater
Each couple performed two routines on Monday night, leading off with James and Emma’s jive. Right out of the gate, I was nervous; the arm-and-hand movements that kicked off this jive didn’t seem synchronized, and I thought James would remain ahead of the music for the entire number. Fortunately, his timing got back on track, and the rest of the routine was full of energy and packed with content — and a dance-ending split that left my thighs burning. Judges’ Score: 36/40

Later, James and Emma performed a jazz set to ‘N Sync’s “Bye Bye Bye,” which they had the daunting task of performing in front of Fatone. Full disclosure: Nine-year-old Rebecca (and present-day Rebecca, for that matter) was fully obsessed with all things ‘N Sync, so I had a stupidly high bar for James to clear with this performance. But his showing was impressive nonetheless, full of power and the right amount of sass. Judges’ Score: 36/40

Sean Spicer and pro Jenna Johnson
An Argentine tango was up first for Sean and Jenna — and as soon as I heard those two words, I was scared. The legwork in this style is typically so fast and intricate that I was sure Sean couldn’t handle it… until I remembered that he’d probably just be standing still while Jenna danced around him. And that’s essentially what happened! At this point, we pretty much know what we’re getting with Sean, and I can accept that. What I don’t understand is why the judges keep giving him sevens when we’ve seen virtually no improvement; his work ethic and positive attitude are surely commendable, but come on. The guy isn’t doing anywhere near what Hannah Brown and Lauren Alaina are doing, but his numbers are approaching theirs, and that seems… silly. Judges’ Score: 26/40

Next, Sean and Jenna danced a foxtrot, which was unfortunately not as smooth as it needed to be. But I appreciate that the judges’ paddles seemed to reflect the quality of the routine this time. Judges’ Score: 24/40 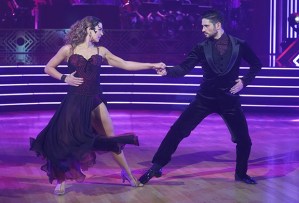 Hannah Brown and pro Alan Bersten
Hannah and Alan showed off a salsa first — and while I agree with the judges that their lifts weren’t out-of-this-world, I’d argue that Hannah is still attempting more intricate and ambitious lifts than any other female competitor, and that’s worthy of more praise. (Lauren gets a pass, though, because girl’s got fractured ribs.) Anyway, lifts aside, this number was fast-paced and precise, and the attitude that Hannah delivered in that opening sequence with the troupe was everything. Judges’ Score: 32/40

Their second routine was a tango, which was fabulously sultry — though Hannah must have whiplash after that number, right? Judges’ Score: 39/40

Lauren Alaina and pro Gleb Savchenko
First up was a quickstep for this pair, which was pleasant enough, but totally forgettable. And I love Lauren! But I truly remember nothing about this routine, except those giant hearts that the back-up dancers were holding, like something out of a fever dream. Judges’ Score: 34/40

Fortunately, Lauren and Gleb’s rumba made a much stronger impression. I do wish Lauren would relax into her movements a tiny bit more — she tends to get a little deer-in-the-headlights when she moves to a new section of the dance — but on the whole, this routine was both heartfelt and sensual. Judges’ Score: 36/40

Kel Mitchell and pro Witney Carson
Kel and Witney started with a paso doble, which proved that Kel can hold his own, even without Witney next to him. That stepping section! Those knee slides! Witney careening toward the stairs (which sounds scarier than it was)! Len was disgruntled by the lack of true paso doble content, but the routine was fierce and fun nonetheless. Judges’ Score: 34/40

Next up was a Viennese waltz, which could have been an ice skating routine, it was so smooth. (I’m a sucker for a Boyz II Men soundtrack, too.) Judges’ Score: 40/40

Ally Brooke and pro Sasha Farber
Both of Ally and Sasha’s routines (a samba and a jazz) earned perfect scores — and don’t get me wrong, they’ve been very, very good all season long. But given how harshly the judges have criticized contestants like Hannah and Lauren, I’m surprised they didn’t have a single critique for this pair; some of Ally’s movements were on the sloppy side, including the final eight-count of her jazz, which didn’t quite land on the beat. Judges’ Scores: 40/40 and… 40/40

OK, your turn! Do you agree with Sean and Jenna’s elimination? (I think I know the answer!) Drop a comment below with your reactions.