Warning: We’re about to spoil the game-changing events of Monday’s 9-1-1. Haven’t watched yet? Turn back before it’s too late!

Monday’s 9-1-1 began by putting a microscope over Hen and Karen’s relationship, which has been in rough shape ever since the hopeful mothers-to-be lost a half dozen embryos. “It’s been three weeks,” Karen reminded her wife while discussing her crippling depression. “I’m sorry my grief is taking so long. What will be an acceptable amount of time for me to mourn? We lost six embryos, so is it a day for each one? Or can I negotiate for a little more time to process my loss? Why am I the only one that’s feeling it?”

Hen did her best to relate, telling Karen that she also “got really attached to the idea of a new baby,” but that only made things worse. “Those babies were just an idea to you,” Karen said. “But each one of them was actually a part of me.”

As she relayed to Athena, Hen found herself torn over Karen’s struggle. She understood her wife’s need to grieve, but she also needs Karen to be present for their family’s sake. Ironically, Hen didn’t realize that she was basically doing the same thing to her work partner, Chimney, until he called her out for getting distracted.

Sadly, that distraction turned fatal when Hen accidentally crashed the ambulance into a young woman named Evelyn. And because 9-1-1 loves to rip our hearts out whenever possible, we were given Evelyn’s complete backstory. (She was about to make her debut with the Los Angeles Philarmonic! Her grandmother was so proud! Her dad was trying on multiple shirts!)

“There’s going to be an investigation, and it starts now,” Athena told an inconsolable Hen upon her arrival. “The LAPD and LAFD are going to roll up onto the scene with a lot of questions. You need to think about what you’re going to say. Only tell them what you know. Not what you think, not what you feel. Answer their questions, but stick to the facts. Do you think you can do that?”

Based on Hen’s complete breakdown at the sight of Evelyn being pronounced dead on the scene, I’m not sure she can make that promise. 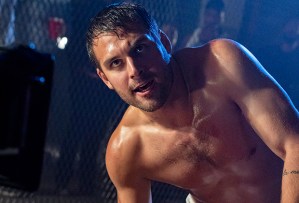 * Eddie’s rise to stardom in the underground fighting community hit a snag when he accidentally kicked a piece of his opponent’s nose into his cranial cavity. (At least I think that’s what happened. This may surprise you, but I’m neither a first responder nor a cage fighter.) Even though it meant exposing the whole operation, not to mention revealing his side hustle to Lena, Eddie placed a call to 9-1-1. It saved the man’s life, but it didn’t spare Eddie a follow-up lecture from Bobby.

* As I was watching that cold open (pun intended) about the feuding figure skaters, I couldn’t help but wonder… how have Ryan Murphy & Co. not yet given us a campy dark comedy about the Ice Capades? Maybe that would be too easy.

* Speaking of life on the ice, who would have ever guessed that Bobby’s mysterious past included a brief stint as one half of a decorated figure-skating duo? Sure, we knew the man was riddled with demons, but nothing like that.

* And rather than risk Buck hearing it from someone else, Maddie came clean to her brother about the stalking complaint filed against her. People sure got a lot off their chests this week, didn’t they?