There are a few things that The Walking Dead fans take for granted — things like, the show will never run out of zombies, Daryl will never get killed off, and he and Carol will never betray one another. But that last one was called into question in a big way in Sunday’s episode. Read on to find out how, as well as to learn which community might soon need a bigger graveyard and to review the lengths to which Negan went in order to be accepted as a Whisperer.

‘EITHER WE’RE ENOUGH, OR WE’RE NOT’ | Early on in “Bonds,” Daryl joined Carol on what she lied was another sweep in hopes of finding Negan. When she planted herself in one spot, saying that she intended to keep watch there for the fugitive, her buddy called BS — it wasn’t like Negan was gonna wander through an open field looking to get apprehended! He was a jerk, but he wasn’t an idiot! So Carol admitted that she was really looking for Alpha’s horde. To kill time until they saw something, anything suspicious, they threw acorns at a can and discussed Connie. (Those of you who have maintained that there is nothing going on between her and Daryl must have been thrilled to hear him insist that “it’s not like that. Not at all.”) Eventually, Carol and Daryl glimpsed a Whisperer gathering stray walkers. If the villains moved their guardians to their hiding place after dark, Carol wanted to risk crossing the border in order to ascertain the horde’s location. And no, she wasn’t worried about everyone paying the price for disobeying Alpha. In Carol’s eyes, they were already paying. When Carol excused herself to pee, Daryl, convinced that what she really wanted to do was take another stab at assassinating Alpha, searched her bag but found nothing. “Wanna frisk me?” asked Carol upon her return. Ultimately, she convinced him to join her daring mission. And though the plan was for them to “watch, learn, leave,” nothing more, it went up in smoke when Carol stepped on an especially noisy twig. As walkers and Whisperers lumbered toward the sound, Daryl snapped a zombie’s neck in order to slit its belly and cover himself with protective innards. (Which would’ve been an awfully smart thing to have done before they crossed into Zombie Central, no?) Carol was fine, too. In fact, she’d apprehended a Whisperer, whom she suggested they could take back and pump for intel. Which hadn’t been a part of her and Daryl’s plan but clearly had been a part of hers all along. As Daryl noted, the hostage was bound with a zip tie that he hadn’t spotted in her bag! 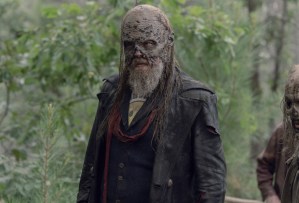 ‘YOU’RE TOO LOUD, TOO WEAK, TOO FULL OF EGO’ | Meanwhile, Beta, escorting a blindfolded Negan back to Whisperers HQ, quickly became annoyed with the would-be pledge’s yammering. (Try making it through Season 7, dude.) When Alpha’s second in command contemplated silencing Negan permanently, he quickly explained that he’d been a prisoner of the Whisperers’ enemies for years and would gladly divulge all of their secrets. So instead of slit Negan’s throat, Beta shut him up by repurposing his blindfold as a gag. Once they reached the Whisperers’ camp, Alpha instructed Beta to test Negan. When her right-hand man balked at the order, she noted how often he’d recently second-guessed her and asked, “Is it finally time for the Beta to become the Alpha?” In response, he knelt before her and said solemnly, “Never.” (Awww, he’s not just a monster, he’s a green-eyed monster!) But it was a big mistake for him to have bowed down before Alpha where Negan could see. That was to Chatty Cathy an invitation to discuss the kinkiness of kneeling and share the way that Alpha’s shaved head “tightens my britches.” At least Negan hushed up during most of his grueling trial… which involved digging a mass grave for a bunch of walkers, skinning some (which seemed to gross even him out!), and killing a pig for dinner. (Aside from the pig stuff, which I could have happily done without, the sequence was pretty funny, especially Jeffrey Dean Morgan’s reaction to ginormous Beta lugging two walkers over his shoulders after Negan had struggled to drag even one.) That night, when Beta refused Negan so much as a piece of bacon — and knocked him down — he cleverly resisted the urge to fight back in front of Alpha. So finally, a desperate Beta got Negan alone and left him for dead among a pack of walkers. The morning after, Beta was chagrined to see that his plan had failed — spectacularly. Negan not only strolled back into camp, he made a beeline for Alpha. “Whether my reputation precedes me or not… I’m all in,” he told her. “Whatever you want, whatever I got… it’s yours.” With that, he put down his bat (hey, how’d he get that back?) and knelt before her to be… erm, sniffed and shushed but, it appeared, accepted. 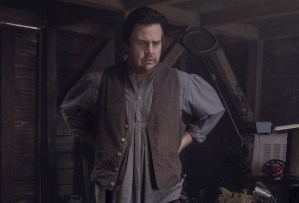 ‘EVERYONE WANTS A SLICE OF EUGENE’ | In other developments, the stomach bug that had gotten the better of a few Alexandrians suddenly was affecting a whole bunch of them. (Could the walker guts from the Whisperers dam have been trickling downstream and making everybody sick?) A feverish Rosita was especially worse for wear. (Foreshadowing?) But before Siddiq insisted that she let him take her to the infirmary, she mustered up the strength to radio Eugene to admit, more or less, that she missed him. And he missed his (former?) crush, too. However, he was soon distracted when the Hilltop’s radio, newly upgraded with “Soviet satellite guts,” managed to connect him with a stranger, a woman with whom he had an insta-connection. She was reluctant to share details about her location, etc., but she was willing to keep talking with him, so long as they kept their chats on the DL. Finally, after spelling Dante in the infirmary, Siddiq fell asleep rocking Coco… and woke up on the balcony of the windmill. Was he dreaming? Had he sleepwalked? Not sure. So, what did you think of “Bonds”? Do you buy that Carol would lie to Daryl? Or, for that matter, that if Beta wanted Negan dead, he wouldn’t have just gutted him? Hit the comments.