The Big Bang Theory‘s Johnny Galecki knew he was in for something special when he was handed the role of Caltech experimental physicist Leonard Hofstadter.

“I was very attracted to the Leonard role because I saw that Leonard and Penny dynamic being very profound if the show was to go for some time,” Galecki reveals in the exclusive clip above. After Roseanne, “I was cast as the love interest’s best friend or his gay assistant… I didn’t get a lot of those opportunities.”

The video — which also includes commentary by Jim Parsons and EPs Chuck Lorre and Bill Prady — is part of a larger, never-before-seen retrospective that is included on The Big Bang Theory: The Complete Series DVD and Blu-Ray, available on Tuesday, Nov. 12. Additional special features exclusive to the boxset are “BBT‘s Greatest Hits: 12 Years of Comedy in 24 Minutes” and “All the Stars in the BBT Universe.” Those are in addition to all the special features included on previous season releases. The limited edition Blu-Ray set also includes digital downloads of all 279 episodes. 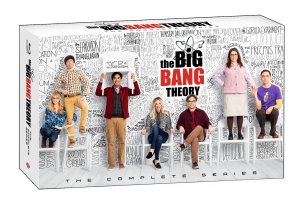