Here’s something we can all be GLAAD about: The media-monitoring organization’s just-released “Where We Are on TV” report, which evaluates the overall diversity of primetime scripted series regulars and tallies the LGBTQ characters on cable networks and streaming platforms, says that where we are… is a pretty good place.

Not only are there more LGBTQ series regulars than ever before, there has been a significant increase in the racial diversity of LGBTQ characters on broadcast and cable. In addition, there are now more LGBTQ women in regular and recurring roles on broadcast than LGBTQ men — a first in the 24-year history of the “Where We Are On TV” report. (Though LGBTQ women outnumber men 53 percent to 47 percent, gender parity was thisclose to being achieved.)

In 2018, GLAAD beseeched the television industry to reach a goal of 10 percent LGBTQ inclusion among broadcast’s primetime series-regular characters by 2020. The industry not only did so, it blew past its goal by .2 percent (eclipsing the previous year’s 8.8-percent record high). 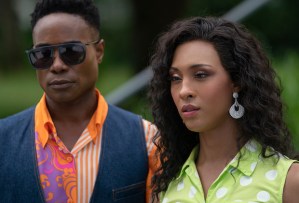 Also of note in the report: Across all platforms, the percentage of bisexual characters was down from the previous year (although the number of bi characters actually increased). The number of transgender characters rose from 26 to 38. (Go, Pose!) Racial diversity among LGBTQ characters increased on broadcast and cable (but decreased in streaming). Of all series regulars on broadcast scripted television, 47 percent are people of color — up 3 percent from the previous report to reach a new all-time high. Finally, only a single asexual character was reported —Todd Chavez from BoJack Horseman (which is ending its six-season run in 2020).