By the conclusion of Tuesday’s episode of The Voice, the final metaphorical punch had been thrown in Season 17’s Knockout rounds. And if you were feeling a little black and blue, I wouldn’t blame you. Who could? A few of the cuts we’ve already withstood have hurt. So, after reviewing the performances that sent the last of the Top 20 to the Live Playoffs, we’ll discuss the eliminees we were sorriest to see go. But first, Tuesday’s sing-offs… 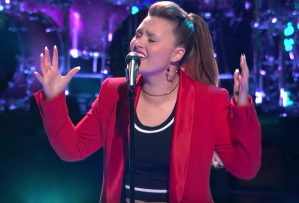 Team Legend: Marybeth Byrd singing “All I Ask” (Grade: B) defeated Preston C. Howell singing “The Way You Look Tonight” (Grade: B) | In rehearsal, Marybeth sounded, er, a little rough to me. I knew she was capable of more. We all did, right? Show us the kid who didn’t stutter when she sang along with Adele, MB! OK, technically, she didn’t stutter. But she sounded like she was struggling like crazy. Warm up your lower register, mega mentor Taylor Swift advised. But she also said it was “so good,” and I wasn’t so sure about that. Practicing next, Preston was advised by Taylor to flirt with the audience. John wanted him to find a spot in his classic cover where he could really be himself. On stage, Preston performed like he’d been beamed in from another era, like he was a heretofore-unknown member of the Rat Pack or something — which was both good and bad. On one hand, I sometimes thought, “Eh, this feels like he’s putting on an act, going through the motions rather than being authentic.” On the other, it was nonetheless charming, I’m a sucker for a little bit of fancy footwork, and he sounds swell within his somewhat limited vocal range. When Marybeth stepped behind the mic, she stumbled at first, running afoul of a coupla little pitch problems. However, the bigger the song got, and the more swept up in the emotion of it she became, the better her performance was. A bit strained maybe, but better. This definitely wasn’t the best we’d heard from either Marybeth or Preston, though. John disagreed, at least when it came to Preston — this was his favorite performance by the wanna-Bublé. 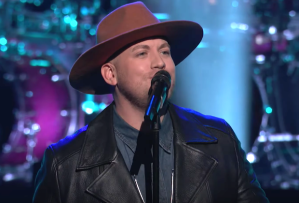 Team Blake: Ricky Braddy singing “So High” (Grade: B-) defeated Zach Bridges singing “The Dance” (Grade: D+) | In rehearsal, Ricky told us that his John Legend cover showed every part of his voice. Mind you, we didn’t get to hear a whole lot of it. Taylor advised him to wait till late in the song to get into the physical element of his performance. Zach told us that he’d picked his Garth Brooks cover because he wanted to prove to his coach that he could be his country guy. “You look as uncomfortable as can be,” Blake told him after his first run-through. (Tell me again why Cory Jackson isn’t still in this competition, dammit.) Up first on stage, Ricky struck me as affected, like he was singing every line in italics. He has a nice-enough, biggish voice, but there just didn’t feel like there was any heart in it. It was all show, no soul. Following Ricky into the spotlight, Zach immediately felt more “present” than Ricky. But jeez, he sounded scared and pitchy as hell. Are we sure there’s no way we can’t dump both of these guys and keep Preston on the show? Zach was, sorry to say, alternately dull and underwhelming.

Team Kelly: Damali singing “Sober” (Grade: C) defeated Gracee Shriver singing “Leave the Pieces” (Grade: B) — Gracee stolen by Blake | In rehearsal, Damali told us that she was singing her Demi Lovato cover for a family member who had struggled with addiction. Damali herself seemed to struggle to stay on pitch. Afterward, Kelly encouraged Damali to go for a note that the contestant wasn’t sure she could hit. This wasn’t going to go well. Next, Gracee made Taylor think that they might be the same person because she, too, was a tall blonde who loves breakup songs. After she tried out her Wreckers cover, this seemed like her Knockout to lose. She was country, she was good, and Damali… oh, she just couldn’t seem to stay on pitch. Taylor’s only suggestion for Gracee was to sound more desperate, less cavalierly “Bye, boy” when she sang. First on stage, OK, Damali surprised me from the start. She demonstrated a lot more polish than we’d heard in rehearsal. Technically, it was probably a good performance. It just left me feeling “meh,” like I’d rather hear Marybeth Byrd struggle than Damali soar. There was no “there” there. Up next, Gracee, her voice full of yodel-ly vibrato, was instantly more interesting. The number wasn’t the most exciting in the history of The Voice, but she sounded confident and competent, I suspected I’d be able to pick her vocal out of a lineup, and she didn’t bore me — always a plus. Blake definitely got the better end of this bargain.

And for some reason, Team Gwen’s Calvin Lockett/Myracle Holloway Knockout was given an extremely truncated treatment. How truncated was it? We never even heard him sing a note, that’s how truncated it was. I mean, for Pete’s sake, how bad could he have been? Needless to say, he was cut, and Myracle made it through to the Top 20.

Which singer stood out for you Tuesday night? Vote in the poll below, then hit the comments with the name of the eliminated contestant you’d most like to reinstate. I suspect you know who mine is, with Marina Chello a close second.