This week on The Flash, Cisco’s investigation of a murder led to the reveal of a never-before-seen doppelganger from another Earth. Meanwhile, Nash Wells emerged from a subterranean adventure with some oddly auspicious news.

While also grappling with some peculiar bouts of sleepwalking, Cisco got a visit from Breacher, who regretted to share that Cynthia aka Gypsy had been murdered, during a mission on our Earth. Looking to ID the killer — and with Barry away on a needed islands excursion with Iris — Cisco clashed with some visiting Collectors from Cynthia’s agency. And for a moment there, it looked as if Cisco himself might have done the deed, during one of his somnambulistic excursions — especially when Kamilla tracked the murder weapon to Cisco’s lab. But when the Collector came to arrest Cisco, they were met by his hologram, plus a holocube that would explain what he was up to….

Cisco had deduced that Echo, an elite Earth-19 hacker who had dogged Cynthia for years, had rigged his white noise machine to plant thoughts and trigger his sleepwalking episodes. When Cisco tracked down and confronted Echo, it was revealed that the baddie was Cisco’s own doppelganger! 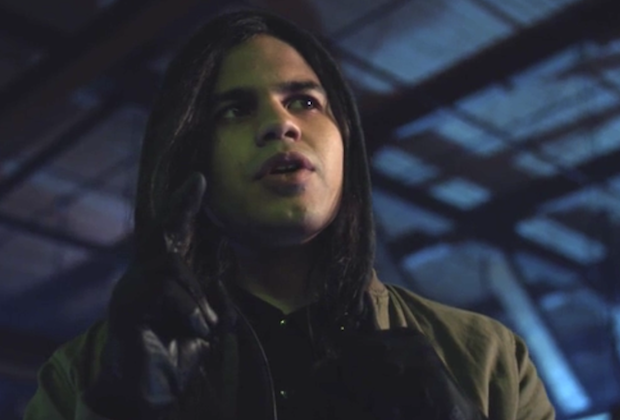 Asked about portraying yet another Earth’s Cisco, Carlos Valdes told TVLine, “The most interesting thing about Echo is that Echo was written entirely differently [at first]. It was a completely different storyline, a whole other thing we were exploring, and as we thought more about it, we all decided — with [showrunner] Eric [Wallace] at the helm of course — that it was too intense. It wasn’t the story we were trying to tell.”

The end result was that Echo was a rather cerebral, almost chill villain — one whose speciality was hacking identities so that a person from one Earth could trade places with their doppelganger from another (regardless of mutual consent).

“We changed it up the night before we started the episode, which gave me very much a whiplash sort of feeling,” Valdes recalled. What’s more, “Usually with villains that are one-offs, it’s tough to give them dimension because they only get one or two scenes to really prove that they’re real characters and to show where they’re coming from. So I think that was actually my biggest challenge, trying to make Echo a real villain and not just some mustache-twirling archetype.”

Echo, for all his tech smarts, wound up outwitted by Cisco, who had adjusted the baddie’s vaporizer gun to instead entrap its user inside a force field. Afterward, Cisco happened to blurt out the L-word that he repeatedly tried to say to Kamilla all episode long. (And yes, she feels the same.) 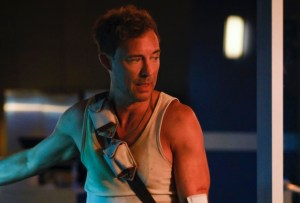 Elsewhere in this week’s episode: Joe tracked Nash Wells to that tunnel where one Monitor or another appears to be hiding out, but during a tussle, the latter’s gadget gauntlet triggered a cave-in. Ralph eventually saved the day (just as Joe faithfully hoped!) before the gents’ air ran out. When Nash later overheard Joe speak of the Monitor and Barry being doomed to die in the Crisis, the newest Wells charged Team Flash with gathering some supplies and meeting him down in the tunnel. Why? Because “I know how to save Barry Allen.”

But… don’t cancel your DVR recording of this year’s “Crisis on Infinite Earths” crossover just yet. “Nothing with Wells ever ends up going well — which is ironic, because his name is Wells,” Valdes reminded. “So I’d say to keep your hopes up, but don’t keep them too high, because a Wells is usually up to no good.”