This week on CBS’ NCIS, the Case of the Week becomes the Kasie of the Week, when the forensic scientist’s personal and professional worlds dramatically collide.

In the episode “Institutionalized” (airing Tuesday at 8/7c), when a petty officer’s son is found murdered at his “Welcome Home From Prison” party, Kasie’s lifelong best friend, Dante Brown (played by Devale Ellis), emerges as a suspect. Not helping Dante’s case is the matter of some prior arrests, though the nature of those past offenses brings up the issues of mandatory minimums and how such sentencings can paint an inaccurate picture.

TVLine spoke with Diona Reasonover about Kasie’s dilemma, the self-doubt it will ignite, and much more. 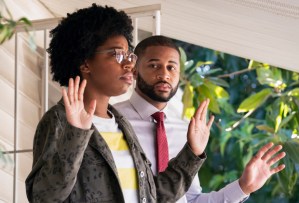 TVLINE | It is time for Kasie to get pulled deep into the drama. What is her connection to the Case of the Week?
We’re going to see Kasie’s best friend, Dante, suddenly appear in her work life when he gets caught up in a case that ends up coming across Kasie’s desk. And because of that, you’re going to get to see her really struggle with how her personal life intersects with her work life. It’s very different for her having to trust the team in this way, to trust that they really have her back. You’re going to watch her be very conflicted because if the team is like, “We think we got the right person, and your best friend is saying, ‘I’m not the right person,'” somebody is wrong.

TVLINE | In the sneak peek TVLine is running (below), Dante is in the interrogation room and Kasie’s observing, with Jack. She worries that Dante is being held to a different standard because of where he’s from and because of his priors.
The interesting real-life situation there is I think people truly do not realize how difficult it is once you’ve been arrested for something, or are suspected of a crime. We’ve gotten rid of a lot of mandatory minimums, but those really impacted people for a long time where it the “three strike” rules would send people to jail for ridiculous amounts of time, for crimes that didn’t merit that type of punishment. I think it’s very easy for people who have not been involved with it to say, “If you didn’t want to do the time, you shouldn’t have done the crime.” But the punishment that you get doesn’t fit the crime. People get caught up in a system it is very difficult to disentangle yourself from, even after you have allegedly served your punishment for the crime committed.

TVLINE | One of the things we heard during the whole Felicity Huffman thing was that it wasn’t so much that she got off light, but that people of color get penalized excessively and for smaller infractions.
The percentage of people of color that are incarcerated in this country is much higher than any other group. There have been multiple studies that say that people commit crimes at approximately the same rate, so you would think that proportionally the ratios would be about the same — but they’re not. Why is that? It’s because of things like mandatory minimums.

It’s really a problem, and until people start to realize that this is not an individual failing but a systemic problem, we’re going to keep having the mass incarceration numbers that we have. I could talk about this for quite some time. I wrote for Adam Ruins Everything, and one of the episodes that I was really proud of, that I worked very hard on, was “Adam Ruins Prison.” That was a time when we examined it. 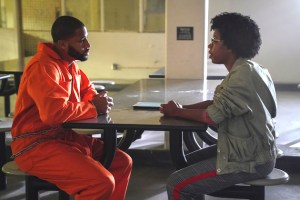 TVLINE | Kasie mentions Dante’s neighborhood, too, as a prejudicial factor.
There are certain communities that are much more overly policed. That’s not coming from a place of inherent evil or outward bias, but what it does is it puts people closer under the microscope, which can be pretty unfair and very penalizing.

TVLINE | What new things do we learn about Kasie through this episode?
You will get to see how she handles her personal life, which is something that we’ve never seen before. You’ll also get to watch her doubt herself in a way that we haven’t seen before. She has known Dante since she was a little girl, so if she has been pushing and advocating for someone who has been lying to her to her face directly, and so easily, what else has he lied about?

TVLINE | A year-and-a-half into your time on NCIS, what do you like most about Kasie?
Well, I love that she’s smarter than me. [Laughs] And I know this is going to sound a little hokey, but I mean this truly from my heart: I love having a chance to represent, to kind of be the public face of NCIS. Obviously, I’m not a real NCIS agent or a real forensic scientist, but the people in NCIS work so incredibly hard, and is very incredibly hard to even pretend to be that brave. Oh, and I have one more thing: They always give Kasie really great pants. I wish that I had pants nearly that good in real life; I’m just rocking jeans all the time.

TVLINE | And if you, Diona, could give Kasie one piece of advice…?
Calm down! She is always a bit on edge because she’s kind of a people pleaser, which is good because it means she cares, but also girlfriend needs a massage and a mimosa. 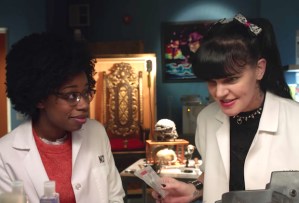 TVLINE | She and Abby do share a certain “effervescence,” let’s call it. Besides what was on the page, was there anything that you did to help differentiate the two?
I don’t think I necessarily did anything differently; I just literally am a different person. I know that sounds like an incredibly stupid answer, but I think people loved Abby for a reason, and I think people love Kasie for a reason. We love positive people! I just bring a different energy to it because I’m straight-up a different person.

TVLINE | At first, there was almost an anxiety that came with Kasie.
I think she started off much more anxious than she is now. I would come home and my wife would be like, “What happened?!” I probably looked like the Joker or something, eyes all wide. [Laughs] I love that she’s kind of found her footing, but she does still has a lot of that “Got to get it done right now!” kind of energy.

TVLINE | In the first episodes of this season, a little character named Ziva David swung by. What was it like for you playing someone who was kind of not—
Not in on the joke? [Laughs] It was actually very fitting, especially seeing as I literally wasn’t there when she came. Although our characters have never met on screen, I got to kind of sit back and watch Cote work. She is an incredibly generous, charismatic, captivating actress to watch, so that was very cool.