Mayans MC sure knows how to ruin a good party.

Last year, Season 1 of the FX drama concluded with a festive reunion between the Mayans and members of SAMCRO, which was fun for a minute — until EZ realized that Happy Lowman may or may not have killed his mother. This year, on Tuesday’s sophomore finale, a lively birthday party was interrupted by gunfire and a whole lotta death. Perhaps these characters should stop celebrating things altogether? Just an idea!

The episode also brought closure to several storylines, including the season-long mystery of who was responsible for EZ’s mom’s death. Read on for the details of “Hunahpu”:

WAR, WHAT IS IT GOOD FOR? | In the wake of Riz’s death (which we know was actually Taza’s doing), the Santo Padre charter is fully prepared to go to war with the Vatos Malditos. But the Mayan Kings advise Bishop to stand down, revealing that a few other charters are prepared to defect if the gun deal with Vatos Malditos goes south. Santo Padre might want to get revenge, but doing so could cost the entire Mayan organization their sense of unity and brotherhood.

Bishop and Tranq begrudgingly agree to take a meeting with Vatos Malditos’ president, El Palo, and act civil about the whole ordeal — which they do. Tranq even chats with El Palo’s mother, who is about to celebrate her 90th birthday the next day. At first, the other Santo Padre Mayans are annoyed that Bishop has chosen to back down from a war, while the Mayan Kings are proud that Bishop kept his cool and didn’t escalate the issue.

But all of this civility is merely a front to placate the Kings: At the end of the episode, once the Kings have left (and EZ has earned his patch!), the Mayans crash that birthday party that El Palo was throwing for his mother. They mercilessly shoot and kill everyone at the celebration — except for El Palo and his mom, who are able to escape — and they seem pleased with their handiwork. But there’s a problem. One of the victims, now lying dead in the kitchen, is a member of SAMCRO, not Vatos Malditos. We don’t see the man’s face or learn his identity, but Bishop’s response to the accidental death sums it up: “F—k me.”

* Dita finally confesses to Felipe that she put that hit out on him and Marisol all those years ago. It was a combination of jealousy and fear that led her to do it: She was jealous of how much Felipe loved Marisol (aka Isabel), and she was worried that Felipe would 1) spill the beans to Marisol about his affair, or 2) try to forge a connection with his son, Miguel. It wasn’t until much later that Dita realized her mistake, and now she wants to pay for her sins; more specifically, she wants Felipe to kill her, since that fire didn’t quite get the job done when she tried to end her own life.

Later, though, Dita has a change of heart. She still wants to die, but she doesn’t think Felipe can be the one to do it; after all, he’s not Ignacio Cortina anymore. To that end, she enlists EZ and Angel for the task, and EZ agrees to finish the job, since he was the one who pulled at the thread of his mother’s death in the first place. With tears in his eyes, he chokes Dita until she dies, then he and Angel burn her body in the desert while Felipe drives away. 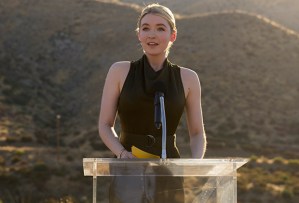 Meanwhile, Dita had already taken measures to make her death look like a suicide, including a letter she wrote to Miguel and Emily before she left. They find her note later that evening and drive to the site of her death, where they discover her charred corpse. Miguel and Emily are distraught… but Alvarez suspects something is up, given the tire marks that he finds in the ground nearby.

(Speaking of Emily, she and Miguel also host a groundbreaking ceremony for their forthcoming agro-park… and none of the attendees seem particularly pleased to be there.)

* Emily provides EZ with valuable dirt on Potter: He once slept with a witness in one of his cases and got her pregnant. Of course, blackmailing Potter with this information is a no-brainer — but should EZ and Angel use the intel to free their father from the threat of deportation, or to release Adelita from Potter’s clutches?

Angel decides they should help their father out of his ICE-related dilemma, and there are few things more satisfying than the horrified look on Potter’s face when EZ and Angel reveal that they know about his secret child. “Your career is f—ked,” EZ warns, unless Potter promises to destroy all his paperwork about Ignacio Cortina and make Felipe a U.S. citizen. Potter is thoroughly rattled, but he does what he’s told, and Felipe gets a certificate of naturalization (for both him and Marisol) delivered to his door the next night.

As for Adelita, she remains in Potter’s custody, even after she’s given birth to a baby boy. Worse yet, a quick DNA test reveals to Potter that Angel is the father of Adelita’s child, and Potter decides to separate her and her baby indefinitely. He also gives Angel an ominous phone call that night, revealing that he knows the baby’s paternity — and, if Potter has any say in the matter, Angel’s son will never know who his father is.

That’s a wrap on Season 2, Mayans fans! What did you think of the finale? Grade it in our poll below, then drop a comment with your full reviews.