This Tuesday on Arrow, the reunions were degrees of warm and frosty, and the revelations downright heartbreaking, when Oliver & Co. came face to face with grown-up Mia, William and Connor.

Rather than get caught up in how this merging of timelines happened — Oliver reckons the Monitor is just effing with ’em — this episode dove deep into the assorted interpersonal dynamics, and the result was pretty damn great. For example, Oliver was warmly received by William, but totally iced out by Mia. And while Diggle was puzzled to hear Ben Turner’s grown son call him “Dad,” Rene and Dinah were gobsmacked to learn that Oliver and Felicity were expecting a daughter when last they all hung out. Oh, and there’s the whole cosmic being thing, too!

To start, the kids keep the gr’ups in the dark about JJ being evil in the future, and that as Deathstroke he slayed Rene’s daughter Zoe. When Oliver brings William and Mia to his and Felicity’s quickly vacated apartment, his notion that the two kids grew up together is promptly shattered. Oliver also gets dinged for A) walking out on and never returning to Felicity and Mia, and B) never seeing William again, after losing custody to Samantha’s folks. Oliver goes to call Felicity with an update, but William advises against it, until they figure out what exactly is going on. While Mia cleans up (and apparently somewhere finds a size 0 tactical suit), William informs his dad that he is gay (“We knew”) and a multi-billionaire.

The Arrow teams are brought back together at the bunker when a new Deathstroke bombs a hospital. Oliver confirms that both Slade and Kane/Joe are accounted for elsewhere, so who is behind the mask? Visiting Dinah at the cop shop with Dig, Connor uncovers a message left by Deathstroke, about the rich being a cancer on the city. Meeting in private, Future Team Arrow recognizes the credo as one of JJ’s, and thus assume he is terrorizing 2019 Star City. Storming the Deathstrokes’ hideout, FTA instead walks into a turkey shoot. Connor yells at JJ up in the rafters, at which point Deathstroke removes his mask to reveal… Grant Wilson. Just then, Team Arrow joins in the fight, saving the kids’ bacon.

Answering for their subterfuge back at the bunker, FTA tells all: JJ took over the Deathstrokes from Grant; Star City is a hellhole in 2040; Rene is a corrupt politician; and Zoe was killed by JJ just before their got transported to 2019. Rene storms out,m and Diggle chases after him. The two argue about one of their kids killing the other, with Rene worrying that nothing they do from here on will make a difference. After Rene leaves, Connor shows up to apologize to his “dad” for keeping secrets. Connor then details how his own difficulties with his adoptive family wound up “stealing the love” that should have been JJ’s, sitting resentment. As such, he blames himself for Deathstroke’s reign of terror. Later, at the bunker, Dig shares with Dinah how the JJ situation reminds him of failing his brother Andy; she counsels him, “We’ve seen our worst; now let’s be out best.” 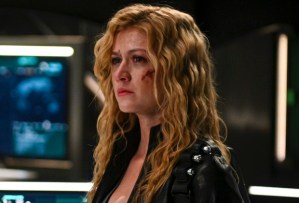 When Oliver catches Mia heading off to the bombed hospital to forage for clues, advising her to at least not go alone, she holds firm that he gets no say in what she does. She brings up again how he walked out on her and Mom to play “hero” and “put mission above family.” So as far she is concerned, he right now is no father but “just some guy in my way.” Offering backup at the hospital, Laurel urges Mia not to kill Grant, as she clearly aims to do. But “Grant has to die, so Zoe can live,” Mia argues. Laurel says that exacting vengeance only brings more pain — a lesson that she once, and successfully, taught Felicity during the Diaz days.  Oliver meanwhile uses William as a sounding board, acknowledging that he doesn’t have a say as far as  Mia is concerned. But, William counters, you do deserve one. this brings up the matter of the fellas’ own past, and how Oliver assumed William hated him at the time he left to live with his grandparents. William says he only wished that Oliver had tried harder to hold onto him.

When the teams get a bead on Grant, Rene resurfaces to quote Dinah, saying that the only way to change the (s–tty) future is to start doing things differently now. Splitting into two teams, Oliver and Mia get ambushed by Deathstroke in tunnels while Dig and Connor find the relay device. Back at SCPD, Dinah and Laurel discover a bomb planted by a “wino.” (Mostly) Mia and (to a tiny degree) Oliver slug it out with Grant, while Curtis and William coach Connor on how to disconnect the relay — which they do just as a tied-up Grant slams his thumb on the trigger. Later, after Mia thanks Oliver for keeping her from killing Grant, he takes her to Robert’s forever-moving grave. “I didn’t really know him until after he died,” Oliver explains, and he doesn’t want that to be him and Mia. 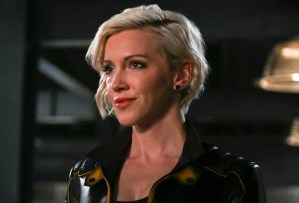 As Rene and Dinah lament the lousy parts of their futures, Laurel suggests that they instead “just do the good stuff.” Better yet, Rene adds, why wait for that future when they can start making it now? So as the oneday mayor delivers a rousing speech to the people of the Glades, we see future “Canary Network” members Dinah and Laurel sharing a friendly meal, and Diggle training a shamelessly shirtless Connor. Oliver meanwhile gets a call from Curtis, whom he tasked with analyzing a piece of fabric grazed by the anti-matter wave that destroyed Earth-Two. To replicate that energy — and theoretically stop a god (the Monitor) — Curtis says that will need some plutonium. Luckily, a general has some… in Russia.

The episode then ends with Laurel outside the SCPD, where she bumps into… The Monitor. “You ache for the world you lost; I have the power to restore it,” he says. And to do so, he requires from her just a single task.

“You must betray Oliver Queen.”