As The Voice’s Season 17 Knockouts continued Monday, five more acts were sent packing ahead of the Live Playoffs. Interestingly, only 20 singers will be competing in the Playoffs instead of the usual 24. Overnight voting will then put eight of them through to the Top 13; coaches Blake Shelton, Gwen Stefani, Kelly Clarkson and John Legend will each get to save one contender; and of the remaining vocalists, the highest vote-getter from each team will vie to be the season’s one and only Wild Card. But I’m getting us ahead of ourselves. We still have Monday’s (and, for that matter, Tuesday’s!) Knockouts to contemplate and debate. Who stood out, and who was done in? Read on… 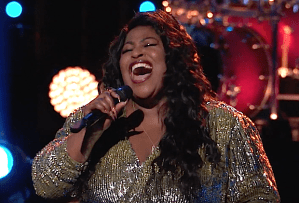 Team Gwen: Rose Short singing “Big White Room” (Grade: A) defeated Destiny Rayne singing “Tell Me You Love Me” (Grade: C+) | “I hugged her; it felt like money,” said Rose after meeting mega mentor Taylor Swift (as if we’d needed a reminder of how funny and lovable she is). I didn’t really remember Destiny at all, even though we were reminded that Gwen had fought Blake to get her on her team. Her rehearsal was pretty good, though; there was a smoky quality to her voice that I dug. “You’re a really good singer!” Gwen exclaimed afterward. Gee, thanks, Gwen, for that invaluable insight. Taylor advised Destiny to delve more deeply into the emotional side of her Demi Lovato cover. Practicing next, Rose blew Taylor away with both her voice and her magnetism. Gwen’s only criticism was that she wanted to see Rose open her eyes during her performance. If that was the biggest problem Rose had, she was gonna slay. Up first on stage, Rose started her performance eyes wide shut. But her vocal was musical-theatre nirvana: as expressive as it was powerful. In no time, she had John and Kelly on their feet. There was just such a force to what she did up there, it was like, “Nope. Uh-uh. Will not be denied.” By comparison, Destiny began her performance sounding puny. She actually wasn’t bad, but “not bad” was never gonna hold a candle to Rose. No matter how yelly she got in hopes of competing, it just wasn’t gonna happen. What’s more, when she got yelly, the song “got the best of you in the higher register,” Blake observed. No contest.

Team Kelly: Shane Q singing “In Case You Didn’t Know” (Grade: C) defeated Kiara Brown singing “The Bones” (Grade: C-) | In rehearsal, Shane was so stunned to meet Taylor that he was afraid to look at her. She had solid advice for Kiara: Noting that the contestant had a knack for exploratory vocalizing, TSwift suggested that she hit the chorus the expected way the first time so that the audience could really be dazzled later, when she reinterpreted it. Shane sounded to me like he was struggling a little in rehearsal. Taylor heard it as him tapping into the desperate, emotional part of his unrequited-love song. He was up first on stage and sounded very much like an open heart. But his vocal didn’t really take off until he went for the big notes that are kinda his bread and butter. Even then, he felt restrained, like he was holding back — he lacked “urgency,” Blake said — and this did not seem like the time to do that at all. I had a hunch he’d just handed the win to Kiara on a silver platter. When she stepped behind the mic… eh, at first she sounded a little flat. Maybe not technically, but the overall effect was… pfft. Flat. As her Maren Morris cover went on, she just didn’t seem to have the chops or the vocal control to really do it justice. Honestly, I wouldn’t have been bummed to see them both go home. 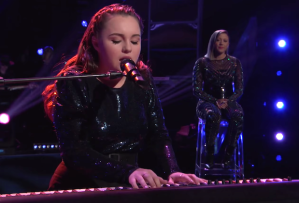 Team Blake: Kat Hammock singing “Kiss Me” (Grade: B) defeated Lauren Hall singing “Breakaway” (Grade: D) | When Kat told Taylor and Blake that she was singing Sixpence None the Richer’s hit, her mentor said that she loved the number; in response, Kat said yeah, it was one of her mom’s favorites. Ouch. Anyway, Kat’s rendition sounded sweet and smooth, like vocal nougat. Taylor suggested that she look less nervous as she went from the piano to just singing, and to find a way to move in sync with the music. Sounded tough. Though Lauren had killed in her Battle — to the point that she got stolen by Blake — her rehearsal of Kelly’s hit was a little iffy to my ears. Singing first, Kat was a dream gently wakened. If a crush had a sound as well as a feeling, her voice was it. For real — there are blankets that only wish they were as soft and warm as the notes that came out of her mouth. Up next, Lauren was a ball of energy as she took the mic. And we know she can sing — like the dickens, even. Here, though, she seemed to struggle with her lower register and ran afoul of pitch problems that were almost heartbreaking to hear. Maybe nerves just got the better of her, but this felt messy, desperate and not anything like what she could’ve been going for. Kat, on the other hand, was, as John put it, “a revelation.”

Team Legend: Will Breman singing “I Don’t Care” (Grade: B) defeated Zoe Upkins singing “Like I’m Gonna Lose You” (Grade: B-) | Before rehearsing his Ed Sheeran/Justin Bieber cover, Will explained that he wanted to shake up the song by throwing in influences from some of his heroes, like Aretha Franklin. Taylor was charmed, and John loved how “swagged out” Will was, but I wasn’t convinced. Ultimately, Taylor suggested that Will maybe, you know, stick with the hook, as is. Though Zoe was singing John and Meghan Trainor’s hit in front of him, it didn’t sound like nerves were going to be an issue — she just plain had it. John’s only suggestion was that she not truncate the song to get the whole thing done, but to do an entire verse and really let it breathe. First on stage, Zoe was a portrait of poise, and she stretched notes as easily as kids do their bubblegum. Her choruses were a little more strained than I would’ve liked, though (and it didn’t seem like that strained quality was altogether deliberate). Not bad, but not the slam-dunk I expected. When Will stepped into the spotlight, his personality didn’t so much radiate, it freakin’ exploded. That, combined with a vocal that didn’t suffer (much) when he danced around, seemed destined to earn him the KO victory. Sure, his high notes were kinda dicey and unsure, but overall, his performance was a winner.

Team Gwen: Jake HaldenVang singing “Powerful” (Grade: B) defeated Royce Lovett singing “Wake Me Up” (Grade: D) | Jake cleverly rearranged Major Lazer’s hit to make it more organic — Gwen loves that s—. (Actually, I do, too. Plus, it shows that he’s not just a singer, he’s an innovator.) She and Taylor just wanted him to be more exposed in his performance. Rehearsing next, Royce kinda yelled through his Avicii cover. Gwen and Taylor ignored that fact to instead give him guidance about clapping on stage. Erm, OK. Performing first, Jake reminded us that his voice could get as bristly as a Brillo pad. By and by, he also demonstrated impressive range, going nosebleed high and sidewalk low. He might’ve lacked a little energy in his stage presence but not in his voice — the dude rocked. When Royce took his turn behind the mic… yeah, I just don’t get him, I’m afraid. He ran through some patches of the song sounding perfectly fine. But then, it was like he thought, “Oo, I’ve gotta really show off,” and started basically shouting. Not pleasant. John said that he and his fellow coaches had loved the charm of Royce’s performance. Which might have been true. It was just the sound of it that was a problem.

Team Kelly: Hello Sunday singing “Almost Is Never Enough” (Grade: A-) defeated Alex Guthrie singing “I’m Not the Only One” (Grade: A) — Alex stolen by John | Ahead of this Knockout, I assumed Alex was toast. 1. Because I scarcely remembered him from the Blinds and Battles. 2. Because Hello Sunday was a favorite of Kelly’s. (She’d dumped Lauren Hall for the kids in the Battles, you’ll recall.) But rehearsing his Sam Smith cover, he sounded like a bonafide superstar. Taylor’s only real suggestion was that he simplify a run. And she and Kelly thought he needn’t only go for a falsetto at the end — he could go both high and low. When Hello Sunday tried out their rendition of Ariana Grande/Nathan Sykes’ hit, they reduced Taylor to tears. Kelly just warned the kids that there were notes on which they had to be completely and totally in sync for their harmonies to land properly. On stage, Alex sang like a barn on fire, assuming barns on fire sing with passion, precision and the appearance of spontaneity. (Yes, I was embarrassed to have forgotten who he was initially!) At one point, he even got his coach on her feet making happy stankface — a good omen. Then, he finished his number with a high note/low note combo that said, “I may be going down, but it won’t be without a fight!” Following that showstopper, Hello Sunday gave a performance that all but screamed, “And why shouldn’t we be Kelly’s favorite?” The girls played beautifully off one another, their voices controlled and sweeter than that dessert you know you shouldn’t sneak into the kitchen for (but probably will). I’m also pretty sure that at least one of their runs qualified as a 5k. Gorgeous. This Knockout demanded a Steal get used!

So, your thoughts on Monday’s KO’s? Vote for the standout below, then hit the comments. Are you sorry we’ll only be getting one Wild Card — and that it can’t be someone who was already cut (i.e., no Mendeleyev, James Violet, etc.)?