Warning: The following contains spoilers for Sunday’s The Walking Dead. If you read on, you may weep.

And (some of) you thought you were Negan’s biggest fan! Sunday’s episode of The Walking Dead revealed that the Saviors’ former leader has for some time had a secret admirer who’s even more ardent about him than he himself has always been. “What It Always Is” also brought Daryl and Connie a baby step closer to the kiss we all expect is coming, shed new light on the origins of Yumiko and Magna’s relationship and began pounding nails into the coffin of a beloved hero. Which one? Keep reading. 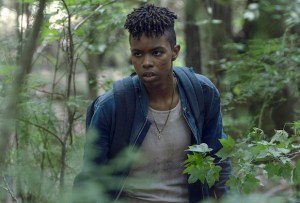 ‘I CAN’T SAY THAT I REMEMBER RATING WALKERS ON HOTNESS’ | After the hour began with an exceptionally well-directed and -edited prologue in which Kelly’s worsening hearing loss put her at risk of becoming Walker Chow, we cut to a runaway Negan as he was approached by Brandon. “Who’s that?” you ask. Good question. In the comics, he was Earl and Tammy Rose’s obnoxious son, but here, he seemed to be the obnoxious offspring of Saviors; in any case, he was obnoxious and had apparently had long idolized the reformed (or at least reforming) bad guy. And he was dying — foreshadowing! — to ingratiate himself with his anti-hero. Before taking off after Negan, Brandon had even swiped his iconic leather jacket and a bat that he soon wrapped in barbed wire. (I don’t think that was the original Lucille, right?) 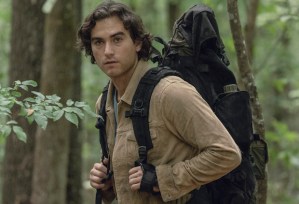 Almost as quickly as I suspect viewers did, Negan tired of his sycophant’s company (even though rating walkers on their hotness seemed like a pretty hilarious time-killer). The pair had just happened upon a site that Brandon thought would make a rad new Sanctuary when they heard screams. Leaping into action, Negan saved a woman named Amelia and her son Milo from walkers. Alone with Glenn and Abraham’s murderer, Brandon suggested that they bump off the duo and search for the stash of weapons that he somehow imagined that they had. In response, Negan suggested that Brandon head on back to Alexandria. But… but… what would he tell them? Where would he say he’d been? “I don’t give a s—,” Negan replied, “just as long as I don’t have to see that pasty, creepy-ass face of yours ever again.” And they say breaking up is hard to do! 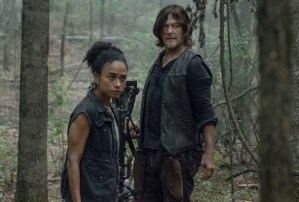 ‘SEEMS AS GOOD A TIME AS ANY TO MASTER THE PUEBLO ART OF BASKET-WEAVING’ | At Hilltop, the primary concerns of the day were fixing the wall (Eugene), bitching about “twiddling our thumbs” instead of attacking the Whisperers (Earl, starring in a one-geezer production of Grumpy Old Men) and figuring out who kept stealing supplies. When Yumiko turned for answers to Magna, who’d been guarding the cellar during the last heist, her girlfriend responded by briefly mumbling, then cranking up the record player. Clearly, they had done no kissing since their tiff, much less kissing and making up. After Daryl, Dog and Siddiq arrived following a search for Negan, Hilltop’s hunters returned home — minus Kelly. So off Daryl, Dog and Connie went to find her. 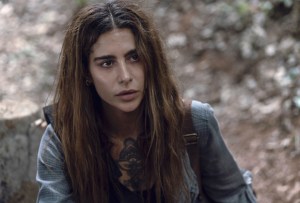 When Connie beat herself up over her sister’s disappearance, Daryl stopped their search — wait, what? — to tell her about the time he’d saved Merle during a drunk-fishing mishap. The story made Connie laugh, but um, last we had seen, a walker had been about to tap Kelly on the shoulder. Priorities, people! After the trio were joined by Magna, who apparently was contemplating taking a vow of silence, Dog led them to Kelly — and the stolen supplies. Turned out, she and Magna had been stocking up (I reckoned in case things went south). Erm, let’s tell everybody that they just found the supplies rather than stole them, Connie suggested to Daryl. Back at Hilltop, Ezekiel reluctantly showed Siddiq that he had a tumor the size of a golf ball and remarked on the irony that, before the end of the world, thyroid cancer had had a 98-percent survival rate. “Now we both know what it means.” 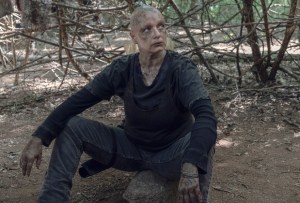 ‘A GUARDIAN TAKEN IS ANOTHER LOST’ | While Aaron was out, presumably looking for Negan, he spied Gamma killing a walker, spilling its guts and pushing its remains into a creek. I thought maybe she was trying to poison our protagonists’ water supply, but when she returned to Whisperers HQ, we learned that she was actually building a dam of corpses, per Alpha’s orders. She’d only come back for one more guardian. (Um, she couldn’t have found one in the woods? Kelly couldn’t seem to avoid ’em!) Overhearing, a random Whisperer suggested that Alpha stop dropping trees and declaring borders, and instead unleash the horde. This was a colossal mistake on his part. Alpha put his motion to a vote, and when he received no support whatsoever, she murdered him. “That’s democracy for you,” she quipped before telling Gamma that she could have him. After all, “you said you wanted another guardian.” 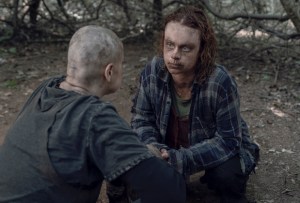 When Gamma returned to dam-making with a relish that hinted at how damaged and disturbed she was, she wound up cutting her hand. Immediately, Aaron threw her a bar of soap and bandages, and tried (futilely) to initiate a conversation. Returning to the Whisperers’ camp, Gamma filled in Alpha, who wondered aloud whether “the man with the metal arm” might be of use, should her third in command “wear a new mask.” Meanwhile, Negan gave Milo an elaborate explanation of what nut-tapping was and offered to show him and his mom to Hilltop. Or as close to it as he dared get, at least. Alas, by the time he returned from gathering firewood, Amelia and Milo had been slaughtered by Brandon, who’d thought Negan had told him to get lost as a test. In a fury, Negan picked up a rock and bashed Brandon’s obnoxious skull in. He then picked up his old jacket and barbed-wire-covered bat and stalked off. 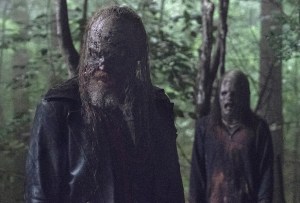 ‘I THINK YOU SHOULD FIND ANOTHER PLACE TO SLEEP’ | After Daryl & Co. returned to Hilltop with Kelly and the supplies, Yumiko and Magna had another argument, this time over the former’s perceived suspicion that the latter was the thief (which — am I mistaken? — she and Kelly were). “For 13 years, that’s how you’ve looked at me,” Magna said. On the contrary, Yumiko had thought when she met her former client that Magna was an innocent person who was mad at everyone because she’d never had anyone to trust. In turn, Magna said some things that made it sound like she’d killed a man who’d abused (or maybe murdered?) her young cousin. So they’d both killed, she added. Yet Yumiko still gave her that look. At a vague impasse, Miko suggested that her girlfriend crash elsewhere that evening.

Nearby, before Daryl took off for Alexandria with Siddiq and Dog, Connie apologized for asking him to lie for Kelly and Magna. “Family,” she signed. When he indicated that he understood, she signed that the two of them were family, too. On the radio with Dante, Siddiq learned that Rosita had caught a bug, nothing serious. When Siddiq asked Dante to put Carol on, Ezekiel took his place behind the mic but chickened out before speaking with his former queen. Finally, Negan crossed into Whisperers territory and began dispatching guardians in hopes of attracting the skin-wearers that Amelia had called “hissers.” When he came face to gnarly face with Beta, he remarked, “All right, you big-ass freak, let’s do this.” Question was, what was “this”? So, what did you think of “What It Always Is”? Were you surprised by Ezekiel’s prognosis? Relieved that Negan offed Brandon? Bummed that “Donnie” are still dancing around their feelings?