We’re five weeks into Supergirl‘s fifth season, and the dots are finally starting to connect.

Kara and William continued their investigation into the Rojas family on Sunday, leading them to a high-tech baddie known as Rip Roar, with whom William and Andrea share quite a bit of history. Not only did Rip Roar allegedly murder Russell Rogers, who was William’s best friend in college, but Russell was also romantically involved with Andrea. Using stolen technology from Lex Luthor, Rip Roar triggered a tidal wave that nearly wiped out the entire pacific coast, a diabolical plot that required the entire team — including Nia, who went full ‘Jean Grey in X2‘ on that wave — to foil.

Then came the big revelations: Not only are Rip Roar and Russell Rogers the same person — which actually felt pretty obvious, especially given the alliteration in their names — but Andrea is in bed with Leviathan. (Come to think of it, that second one shouldn’t have been a huge shocker either, but I’ll allow it.) Following a successful launch of Obsidian’s world-changing new VR tech, Andrea was visited by Leviathan’s spokesperson.

“You’ve really outdone yourself with those contact lenses,” she told Andrea. “I hear they’re as omnipresent as one of our plagues or floods. … Leviathan is everywhere. And now a problem has come up, and we need you to fix it: It’s Rip Roar.” 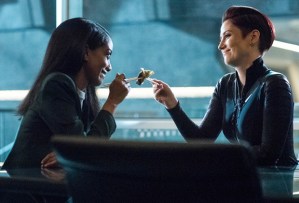 * Kelly planned a special dinner to celebrate her date-iversary with Alex, but their plans were cut short thanks to the chaos of the day. Even worse, watching Alex throw herself in harm’s way triggered Kelly’s memories of her fiancée, who died fighting on the front lines.

* Lena and Hope spent the hour running tests on Malefic, attempting to harness his power of persuasion. And since Lena was fully able to subdue the malevolent Martian by the episode’s end, I’d say the experiment was a success.

Your thoughts on this week’s Supergirl? Season 5 thus far? Whatever’s on your mind, drop it in a comment below.