Sunday was a silent night indeed for Mr. Robot, with a special episode that followed Elliot and Darlene’s Christmas Day hacking heist… with virtually no dialogue at all.

Continuing where last week left off, Darlene picks up Elliot after he and Mr. Robot torch the Dark Army van and the body inside. He’s exhausted, so she tells him: “It’s cool, man. We don’t need to talk.” And then they don’t for the rest of the episode, as they plan and execute a daring break-in to infiltrate the Virtual Reality servers. Elliot gets Darlene a fake employee ID — as Dolores Haze, natch — and a wig, and she distracts the security guard while Elliot sneaks in and punches through a firmware update that freezes the security system for 40 minutes. They also pull a fingerprint from the guard and make a 3D printer replica of it (!) to get access to the company’s servers. 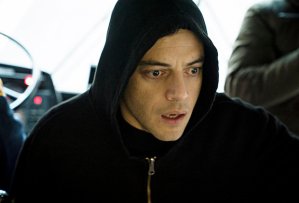 But their luck runs out when the guard snoops around and sees they’ve used his ID to get to the servers. He calls the cops, and Darlene just finishes hacking into Cyprus National Bank before they flee, even leaving her laptop behind. Elliot sprints out the front door past the cops, with a couple of them giving chase, while Darlene calmly removes her wig and switches into workout gear so it looks like she’s just leaving the gym that’s attached to the lobby. Elliot manages to evade the cops and board a city bus, but squad cars soon pull up and block the bus’ path, forcing him to get off and sprint some more. He even gets hit by a car, but somehow limps his way towards a bridge, where he leaps off and rolls down an embankment, where Darlene is waiting with a getaway car. Whew.

Elsewhere in the episode: Elliot’s old therapist Krista prepares for a cozy holiday dinner with her boo before she’s confronted by that nasty drug dealer Fernando Vera, who breaks the episode’s silence by telling her, “It’s time we talked”; Phillip Price receives a secret message via business card and informs Elliot that their meeting is on, even without Tyrell; and Dom is ordered to ID the Dark Army soldier’s body before she gets a fresh assignment to track down “two troublemakers.” Yep, that would be Elliot and Darlene.

How’d you like Mr. Robot‘s dialogue-free installment? Got predictions for the rest of the final season? Join our group chat in the comments below.