This Sunday on The CW’s Batwoman, Alice sat Kate down for an in-depth debrief on what exactly 13-year-old Beth endured after surviving the car accident that killed their mother. But have we heard the entire story? Plus, how will a new character fit into Alice’s plans?

To recap the long, sad tale: an unconscious, teenage Beth was found alongside a river by a man and his young son, Johnny. After coming to inside their home, Beth was assured that the police had been alerted to her whereabouts. But of course, they hadn’t. Beth came to realize that Johnny aka “Mouse” wore his shaggy hair over a scarred left side of his face. She also came to realize that his father had no intention of letting her be found. Rather, the unnamed man saw her as a friend for friendless, socially awkward Johnny. So he kept her locked in a room in their cellar.

One day, Beth used a loose nail to pick the lock and make her way to the kitchen phone and call her dad, but she only got out a few words before he captor intervened. Jacob managed to trace the call to a remote cabin, but Beth was warned that if she made a peep, the man would kill anyone who came looking for her. So she stayed mum during Jacob’s search of the house — and even when her twin, Kate, was right on the other side of the door — while Johnny’s father claimed that his son, who is quite the mimic, had pulled a cruel prank. Jacob and Kate left, and Beth was left behind to stew in her tiny room… and pore over a copy of Alice in Wonderland.

Back in the present day, Alice had brought Kate to a diner, where she drugged her. Kate awoke chained up in the same room where Beth had been trapped all those years. This time, Jacob and Sophie chased a lead on Kate’s whereabouts to the remote house. Jacob tussled with his “dead” daughter, while Sophie got into it with grown-up Mouse, who we learn had recently escaped during the Arkham breakout that took place during last year’s “Elseworlds” crossover. (Mouse tries to wear a mask made of human skin, as his father got the idea to experiment with when he was a lad. Ergo Alice’s recent spree, stealing patches of skin from corpses.)

Alice got the upper hand on Jacob and aimed a gun at his head, but Kate, having escaped her handcuffs, had Mouse at gunpoint. Faced with a stalemate, the group agreed to a detente, and Alice and Mouse were allowed to just walk away — a decision which could come back to haunt the Kanes.

“Mouse (played by The Messengers‘ Sam Littlefield) is very much a part of the fabric of Alice’s past, and he will also play a key role in her plans for the future,” Rachel Skarsten tells TVLine. “That will sort of all be revealed in the next episode, and it shows this very different side of Alice.” As glimpsed in a tender moment between the two at the close of this week’s episode, “That relationship is different than any relationship you’ve seen Alice in up until now, and going forward for a while.” 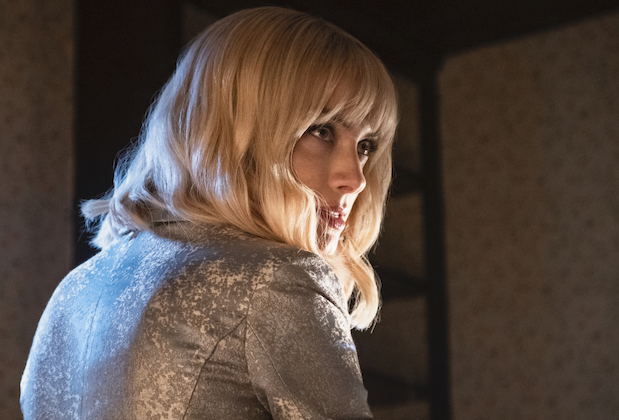 Will Bat-fans be given additional insight into why Beth went as mad as she eventually did? “Alice’s backstory will continue to unfold throughout the season, and characters from that period of time do come back…,” says Skarsten. Speaking to how captivity alone might have pushed Beth over an edge, the actress says, “I think of pain being relative, and what breaks certain human beings makes other human beings stronger. I also find it a fascinating thing about humanity, how two people can have the exact same experience and one comes out of it with new resolve, and another one is just completely shattered by it. So I’m hoping that it’ll be revealed why Beth, in that situation, it was too much for her.”

Plus, any life she led since being held prisoner may have (mis)shaped her as well.

“She was surrounded by a lot of unstable people that sort of continued on through her life and fed into this delusion that she had,” Skarsten offers. “I think that can add to why she became the way that she did.”

On a far lighter note, Skarsten has nothing but raves for Young Beth’s portrayer, who as suggested above will be seen again.