When it comes to relationships on TV, CBS’ freshman legal drama All Rise is playing against type, giving viewers a strictly platonic friendship between Judge Lola Carmichael and prosecutor Mark Callan. For his portrayer, Hart of Dixie alum Wilson Bethel, the dynamic is a welcome change in storytelling that mirrors his own life.

In the following Q&A, Bethel reveals why he’s “advocated strongly” to keep the best friends as just that, and previews Monday’s episode (CBS, 9/8c), in which Mark questions Lola’s mother (How to Get Away With Murder‘s L. Scott Caldwell) in court when she’s called as a character witness for the defense.

TVLINE | The show has turned out to be more than the standard broadcast legal procedural. When you read the script, what attracted you most to the project and to the role of Mark?
The quality of the writing jumped off the page. That’s always the first thing that sets anything apart from other projects. And then there were some really dynamic, interesting aspects at play, even just in the pilot, from my perspective, about Mark. I would say the two biggest components of that were [first] his relationship with Lola. [It] was so cool to see this incredibly strong, respectful, loving friendship between a man and a woman, which I think is something that you rarely see, unfortunately, in television or anywhere, in the movies, too. So that was one thing that really spoke to me as somebody [whose] best friend in the world for 25 years is a woman. I love that. And then I also love the stuff with my dad, which obviously, there are just some seeds planted in the pilot. But I’m a sucker for, like, a wrong-side-of-the-tracks backstory, which is very much what Mark has. And as new scripts have continued to come out and the season has progressed, I’ve been really pleased to see where that storyline is going with his father.

TVLINE | It is so rare to have a platonic male/female friendship on TV that it took me several episodes before I was able to accept that they were just friends.
[Laughs] Unfortunately, I think that’s the case for most people, and my hope is that, eventually, people can kind of get on board with it as that. But I think it really does take a complete recalibration of what we’re trained to expect from TV and movies, which is either that there’s some kind of persistent sexual tension nagging at them, they have some backstory, or that eventually they’re going to end up there one way or another, even if you don’t see it on the surface, and that’s unfortunate. I think it’s a disservice to the millions of intersex platonic relationships that exist everywhere. Why don’t we see those? In some ways, it’s the simplest version of, like, cultural wokeness, but in some ways, it’s not even, like, on the list. But I love it. I’m so pleased that we get to explore that. 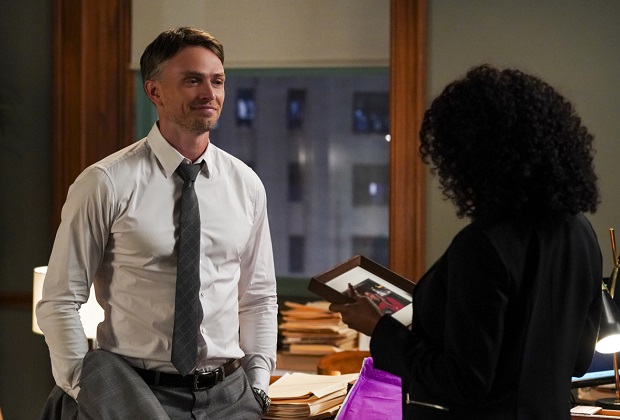 TVLINE | Because I watch a lot of TV, I have to ask: There have definitely never, ever been any feelings between them of the romantic kind, not even in college?
I mean, look, I’m not writing the show, obviously. I certainly had conversations with some of the writers, with [executive producer] Greg Spottiswood, and at this stage, there’s no pull in that direction. Now, I wouldn’t put my life and reputation on the line. But me, personally, I have advocated strongly to keep the relationship in the friend lane, which I think is really important, and my personal view is that you can explore every interesting dynamic, virtually, that you could explore in a sexualized relationship in a relationship between two friends, minus the sex. I don’t think that you are lacking for story or plot points and potential conflict, too, just because two people are friends. I think all the same richness — and maybe even more richness — is available to you. So my personal feeling and what I will continue to advocate for on the show is that that there’s no reason for it to develop in that way. Obviously, I can’t, ultimately, predict or flex beyond a certain point. But my understanding is that the producers and the writers get that. I think as fans of the show continue to respond to that relationship in a positive way, which so far has very much been the case, we can all kind of influence that in a way by saying, “Yeah, we support this.”

TVLINE | It’s nice that Mark’s girlfriend Ria is not a vapid model type. She actually seems very down to earth and more serious about their relationship than even Mark. Is that fair?
I think that is fair. I get the sense that Mark is probably one of these guys who moves into relationships very, perhaps, overcautiously. And I think that that’s kind of where you’re finding him, certainly in the beginning of the show, with Ria, and slowly, maybe, he’s letting his guard down a little bit into these later episodes. As he said in the last episode, he really digs her.

TVLINE | Is he going to be considering that other lawyer’s offer to go out?
I think that’s a really cool relationship, and we will see more of Lindsey Gort in that role as Amy Quinn, so I can definitely tease some really exciting developments in terms of her role in the show. She takes on a really exciting case that overlaps her and Mark’s storyline more. Clearly, there’s some really fun banter and some exciting kind of energy between them. But I think Mark is really committed to Ria at this stage of their relationship, and that’s really important. And again, just to see a kind of different version of things maybe than we’re used to, I think it’s cool to see a woman, in this case the Amy Quinn character, saying, “I’d love to take you out to dinner.” I think he’s probably interested in her, but he’s got a girlfriend, so he’s not going there. 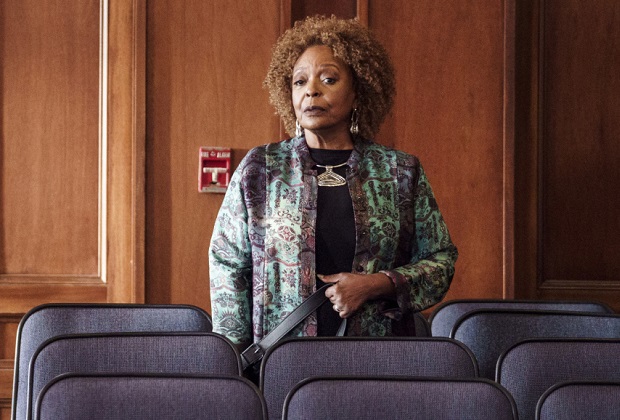 TVLINE | In this coming Monday’s episode, Mark has a very significant storyline with Lola’s mom. What does she mean to him? And what role has she played in his life?
I think she means a lot to him, and vice versa. The sense I get is that Mark’s father was a very unreliable parent figure. Obviously, we don’t know anything about Mark’s mother at this stage, but I imagine there’ll be a storyline there at some point, too. Which is just to say that Lola’s mom, from early on in their relationship back when they were in college, she played an important role for Mark. One of the little plot points in next week’s episode that comes out is that, for example, Lola’s mom co-signed Mark’s first apartment lease. So you get the sense that she was, really, an important parental figure in Mark’s life. And I think that [speaks even further] to how deep this connection is between Lola and Mark. It’s really family… To bring it back to the friend who I mentioned earlier, her mom stood there in court with me when I was a teenager getting into some trouble. Those are real friends, when not only they show up for you, but their parents do, too.

TVLINE | What is it like for Mark to have to go up against someone in court with whom he shares so much history?
That’s one of the really fun, interesting dynamics of next week’s episode. I haven’t even seen the episode yet, but I loved doing it. It’s really complicated. And it’s not just that they’re going up against each other. It’s that they are both very strong-willed, passionate people who are kind of coming at an issue, potentially, from different sides and looking for some way to meet in the middle a little bit, I guess, and also that Mark is a grown man now and a very driven successful prosecutor, which is different from the Mark who maybe Lola’s mom knew when he was 19 or 20 years old.

TVLINE | And having this parental figure show up in his life, what does that bring out for Mark in terms of his feelings about his dad?
That’s, of course, the undercurrent. Mark’s dad will come back in next week’s episode, as well, and that’s part of the idea. From a storytelling perspective, obviously, you can’t have Lola’s mom be in the picture without the question of Mark’s dad being in the picture, right? The reason why Lola’s mom was as important to Mark as she was is because Mark’s dad wasn’t there in the same way. So those two things really go hand-in-hand. And that character of Vic, Mark’s dad, clearly looms large in Mark’s life, both his presence and his absence.