Upon its Nov. 1 launch, Apple TV+‘s first original series included For All Mankind, which looks at the 1960s space race through the lens of an alternate history. Do you say da or nyet to the new drama?

The following recaps only the first of the three episodes released on Nov. 1, followed by a non-spoilery overview of Episode 2.

For All Mankind more or less opens with an ersatz Walter Cronkite anchoring the live broadcast of the very first moon landing, as the nation watches enrapt. Except, the person to emerge from the lunar module and set foot on the moon is not Neil Armstrong, but a Russian cosmonaut. Because in this version of history, Russia utterly blindsided NASA and won the space race, laying claim to what the newspapers will dub the “Red Moon.”

What follows is a bit of panic and a lot of finger pointing at NASA, which is overseen by aerospace engineer Wenher Von Braun. President Nixon — seen in archival video that is overlaid with fictional dialogue — for one is immensely perturbed to be bested by Russia, seeing as it appears that his administration dropped the ball previously carried by Kennedy and Johnson. On a micro scale, the space jockeys at NASA are quite deflated, seeing as they had their eyes on that “first man” prize. But in addition to the disappointed Armstrong and Buzz Aldrin, who are to pilot Apollo 11 in a few weeks, Joel Kinnaman (The Killing) plays Edward Baldwin, the commander of Apollo 10, which came within eight short miles of the moon’s surface… but was envisioned as a mere “dress rehearsal.” In flashbacks, we see how Ed and LM co-pilot Gordo Stevens were ever so tempted to seize the day and make the landing themselves… but Ed held back.

In the wake of Russia’s historic feat, Ed and his colleagues hit a local watering hole, where a reporter looks to get some quotes on NASA being bested. Ed at first deflects the questions, but, lubricated by booze and agitated by anger, he gets to grousing about how NASA has lacked “guts” ever since the Apollo 1 fire. Ed winds up quoted in Newsweek, and from there his career goes a bit sideways — starting with him being pulled from Apollo 15. Luckily, he has just enough friends in the right places to hold onto a job, albeit riding a desk in the applications division. Dissatisfied, Ed mulls a return to the Navy, where he was a highly regarded pilot, though his likely assignment — to Vietnam — doesn’t sit well with wife Karen (Shantel VanSanten). 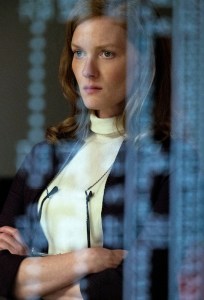 Elsewhere at NASA, we meet Margo Madison (Sarah Jones), Von Braun’s mentee of sorts who aspires to join Mission Control, and at one point during a simulation exercise demonstrates her know-how — though none of the dudes pay her much mind. Far from the Space Enter, we get intermittent glimpses of a group of Mexican immigrants making their way to the States, among them a young girl named Aleida and her father Octavio. It is not until Episode 2 that their story starts to take shape and lightly dovetail with what is happening at NASA, where months later Octavio will take a janitorial job.

The first episode culminates in the Apollo 11 mission that was to mark the first moon walk, but instead, the best hope is that they can make some news by having the astronauts share a live phone call with Nixon from the surface. This Apollo 11, however, experiences problems upon descent, and for a nail-biting stretch of time loses all telemetry with Mission Control. But, whew, just as Nixon is readying to read a mournful speech to the nation, Von Braun & Co. hear crackling over the radio, followed by Armstrong reporting on their rough-but-successful landing.

What’s next, in this alternate reality? Episode 2 delves deeper into Ed’s dilemma, as he puts out feelers with a Navy pal — until he is approached by a congressman to testify in the hearings about NASA’s shortcomings; Von Braun learns of Nixon’s plans to reclaim supremacy in the space race, and thus keep NASA relevant (though Russia may have yet another trick up their sleeves); Margo plots a big career move; and we get a bit more insight into Octavio and Aleida’s world/drama.

Have you sampled any of For All Mankind‘s first three episodes, with the rest to be released weekly?