Wednesday’s American Horror Story welcomed back two popular players from previous seasons, though no one in 1984 was particularly happy to see them. 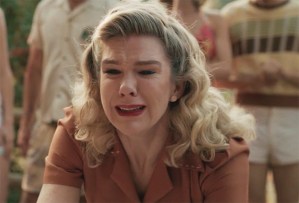 The episode began with a look back at Jingles’ childhood trauma. In the summer of 1948, Benjamin Richter was just a chubby youngster at Camp Golden Star, where his mom (special guest star Lily Rabe!) worked as the camp’s miserable head cook. When she wasn’t feeding hungry campers, she was berating poor Benjamin for his antisocial tendencies.

And her love for him only diminished further when Benjamin failed to save his brother Bobby from getting caught in the engine of a motorboat. (In Benjamin’s defense, he got distracted watching the camp lifeguard having sex with some girl in the woods. And you know what? I probably would have done the same.)

We then returned to the “present,” where Donna was helping Brooke readjust to life among the living. After working through the side effects of her injection, Brooke had a new lease on life, especially once she caught wind of Margaret’s impending festival at Camp Redwood. “I do have a reason to live,” Brooke declared, “and it’s to see her die!” It’s also becoming very apparent that this is Margaret’s version of Fyre Festival, and that’s just wonderful. 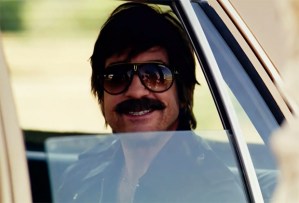 Unfortunately, Donna and Brooke didn’t head back to camp alone; they were joined by Bruce (Dylan McDermott), a smooth-talking mustachioed gentleman who turned out to be a wanted serial killer. (On this show? Color me shocked.) And the more they tried to escape him, the worse their situation became. (Again, on this show? You. Don’t. Say.) After some Death Proof-level torture, Brooke and Donna managed to get the jump on Bruce, tying him to a roadside poll and cutting off a few of his fingers for good measure.

Jingles also made his way back to Camp Redwood, where he answered the dead counselors’ burning questions about why their souls are seemingly tethered to this godforsaken summer camp. As Jingles recalled, the “blood curse” began when his own mother slaughtered the counselors she held responsible for Bobby’s death. She also came after him, but he got the upper hand and killed her, at which point she became the first spirit trapped on the grounds.

Jingles arranged for a reunion with his momster, which somehow went even worse than I anticipated. She took way too much pleasure in revealing that she’s been instrumental in his undoing since Day 1. She’s even the reason Margaret went on her original killing spree back in 1970! “I took the one thing you cared about and I used it to destroy you,” Mama Jingles explained. “The wrong son died that day — it should have been you!” And if you thought the mother and son were going to make up after this, you must be new to American Horror Story. Instead, Jingles’ mother convinced him that the only way to defeat Richard and save his son was to kill himself… which is exactly what he did.

And just to complicate the story even further, we learned that Kajagoogoo — one of the bands slated to perform at Margaret’s festival — only achieved its fame by signing a deal with the devil, one Richard came to collect on this week. Cut to Leslie Jordan (sorry, “Courtney”) screeching at the discovery of a tour bus full of bloody corpses.

Your thoughts on this week’s AHS: 1984? Hopes for the season’s remaining two episodes? Whatever’s on your mind, drop it in a comment below.