This week on Arrow, Oliver sought answers in Nanda Parbat, where he also found his sister and an old frenemy along the way. Plus, wow, how about that ending?!

Nudged by Tatsu to wonder if the Monitor is being straight with him, Oliver ventured to Nanda Parbat, hoping that the ancient order might have some intel on the cosmic being. He quickly if unexpectedly reunited with his sister Thea, who is done shutting down Lazarus Pits but still dogged by the Thanatos Guild. Thea shares that Roy reconnected with her after his Star City visit/bombshell drop, and is now taking time to sort out his new life. She also breaks the bad news that Nyssa is still globe-trotting, and thus can’t help him out.

But you know who can? Talia al Ghul, whom Oliver and Thea soon bump into. She owes Oliver a debt from before, and thus offers to take him to a chamber beneath the Nanda Parbat stronghold, where an centuries-old scroll might disclose what the original Ra’s learned from ancient gods. The chamber, they find, has been looted save for the scroll. And though the text itself offers no clues, Oliver recalls a League motto about how “your old self must die so that your new one may be reborn” — which apparently means to torch irreplaceable documents! And indeed, once the scroll bas been rendered to ashes, they find inside a marble etched with a constellation that will point them to the original Ra’s’ crypt. 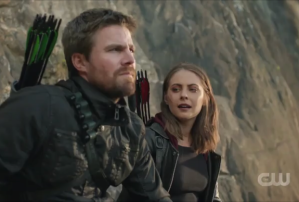 First, though, they must battle the arriving Athena and her Thanatos goons. After doing so and escaping, Oliver parts ways with Thea, then continues on with Talia. Alas, once they reach the next marker — a key plus map to the crypt — Talia jabs Oliver with a knockout drug. When Oliver comes to, Thea is at his side, and together they forge ahead up the face of the mountain where Ra’s years ago vanquished him. During a pit stop along the way, Oliver opens up to Thea about seeing Earth-Two destroyed, how she wasn’t even alive on that world, and how he must now make certain his mission is worthy of the sacrifices he has made. (They also marvel some over what their parents would think of who they each have become!) Continuing on to the crypt, they find it open, and get ambushed by Athena, who already captured Talia.

Athena nudges the trio to brave the crypt and its Raiders of the Lost Ark-like booby traps, which they ably do. But at the final juncture, Oliver stays behind to ward off the Thanatos goons, while Thea battles Talia for an ancient sword that, like Ra’s ring, gives one dominion over the League. Thea, however, winds up with the upper hand and forces Talia to yield. In the aftermath, Thea and Oliver flip through an ancient text that has a rough sketch of what looks like the Monitor (but could be someone quite the opposite) and is described as god who will “bring forth the end of times.” Suffice to say, Oliver is now fully wary of that for whom he has been doing bidding. 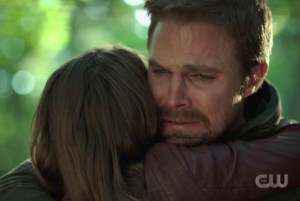 Thea invites Talia to join her… as the co-leader of a League of Heroes, a notion which pleasingly amuses Ra’s’ daughter. After Talia leaves, Oliver bids Thea a tearful adieu, saying that he has enough assistance for the fight ahead.

* John and Lyla traveled to Kasnia, where Ben Turner’s wife, Sandra, and son, Connor, were being held hostage. The trick there was that the baddie involved was the son of a man Lyla once killed, though she wound up using that to her advantage, as she and John bested security and whisked the Sandra and Connor to safety. Their mission complete, John waxed romantic about how they will always be at each other’s side. That led Lyla to cryptically ask John that “no matter what happens, you’ll always remember the good times” they shared.

* In 2040, we learn that William managed to dodge the Deathstrokes who stormed the bunker. Future Team Arrow then breached JJ’s HQ, where a massive fight ensued. Midway through, Mia and Zoe were making peace over a previous argument when JJ suddenly ran through the latter with his sword. As Zoe faded away in Mia’s  arms, Connor went mano a mano with his step-brother and eventually gained the upper hand. But just as Connor debated going for the kill… a bright light permeated the scene, shining on Connor, Mia and William. When the light faded, we saw Oliver…  in the current timeline’s Star City bunker… where Diggle, Dinah and Rene were surprised to see him suddenly appear.

“What is going on?” wondered Oliver.

That, Rene noted, was a very good question, seeing as standing across the bunker from them were… grown-up Mia, William and Connor.

What did you think of the episode “Leap of Faith”?