It wasn’t supposed to go down like this, Will & Grace, and we both know it.

When the beloved NBC hitcom was revived more than a decade after the end of its initial eight-season run, part of its appeal was the reunion of the four friends who are its main characters — and another part was the reunion of the off-screen pals who play them. Now, rumors are flying that the actors, in particular Debra Messing and Megan Mullally, are at odds. Mullally not only has stopped following her castmates, save Eric McCormack, on Instagram, she’s barely promoting Season 11 on social media, and has taken a leave of absence that will result in two episodes going Karen-less — the equivalent of a martini going gin-less. As it is, she only appeared in a single scene with her co-stars in the final season premiere. 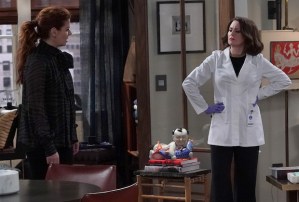 And it just… What’s the word I’m looking for? Ah, yes — sucks. Although McCormack has insisted that the quartet gets along “like a house on fire,” and we can’t know for sure what, if anything, is going on backstage — NBC has declined to comment — a whiff of enmity now hangs over the last episodes of Will & Grace that we are ever likely to get. And frankly, I resent having to watch them wondering how many scenes and subplots were dictated less by creativity than acrimony.

Am I being oversensitive? Is it asking too much to expect a group of celebrated, well-paid professionals to bury the hatchet — again, one that we can’t know exists to need burying — in order to deliver to fans of their series a last hurrah that’s really worth cheering? Or should the gang FedEx one another olive branches and ensure that Will & Grace is remembered for the laughs it gave its audience rather than the toll that it took on its principals?

Your thoughts below. Will the talk of infighting color the way you watch Season 11?