Apple certainly brought out the big guns for its first major TV offering, with Jennifer Aniston, Reese Witherspoon and Steve Carell all starring in the daytime TV-set drama The Morning Show, debuting this Friday, Nov. 1 along with the Apple TV+ streaming service. (I’ve seen the first three episodes.) How could any show starring those three actors possibly be anything but great, you might ask? Well… it could, actually. Sadly, The Morning Show is overly talky, tonally confused, badly miscast in places — and, given the talent involved, a major disappointment.

Set behind the scenes of a Today-like daytime talk show, the premiere opens with a bombshell, with Carell’s beloved anchor Mitch Kessler getting fired after a number of sexual misconduct accusations come to light. And that’s where the troubles begin: Carell is the wrong choice to play Mitch, a smug jerk who plays the victim in ugly tirades against the #MeToo movement. He can’t really shake the Michael Scott associations, and his presence adds an unfortunate comic tone to a very serious subject. The show insists on following Mitch’s fumbling attempts at post-scandal rehabilitation… but every time he appeared on screen, I cringed. 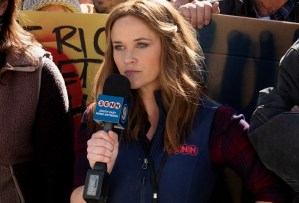 The scandal leaves Mitch’s co-anchor Alex Levy (Aniston) to navigate the fallout as executives try to shake up the show around her. One possibility is West Virginia TV reporter Bradley Jackson (Witherspoon), whose on-air run-in with a protestor goes viral and leads to a contentious Morning Show interview with Alex… and a possible host slot sitting next to her. But Witherspoon doesn’t feel quite right to play Bradley, either; she’s supposed to be a straight-shooting breath of fresh air, but Witherspoon is too close to Aniston’s age to play the unconventional upstart who’s a threat to unseat her. And the dynamic between Alex and Bradley is strange and hard to pin down; their big TV showdown turns into a philosophical debate that isn’t half as revelatory as the show seems to think it is.

It’s all a bit The Newsroom-y, if you remember Aaron Sorkin’s hate-watchable HBO series from a few years back, with the hustle and bustle of live TV production and the constant pressure from executives up on high. (It even has several Sorkin-esque walk-and-talks!) But Sorkin himself couldn’t make The Newsroom work, and the writing here is a significant step below that, with characters making lots of bold statements about who they are and what they stand for. These people don’t just talk. They proclaim! They declare! They espouse! “America is ____!” “The news is _____!” “Women today are _____!” I wanted to see more of the nuts and bolts of actually producing a live TV news show, but the series is much more interested in showing us scene after scene of this kind of speechifying… and it’s exhausting.

The Morning Show also seems to be set in a fairy-tale world of journalistic integrity, with starry-eyed reporters battling with coldhearted network executives, like it’s encased in amber from two decades ago. It makes half-hearted attempts to incorporate modern broadcast trends, but just feels hopelessly out of step with the way people consume news now. (Side note: The show’s fictional TV network is named UBA, which is a terrible network name. Just awful.) The overall tone is deeply confused: First, it’s light and bouncy, almost comedic, and then turns gravely serious, like a daytime TV host making a particularly clumsy segue.

It does boast an absolutely stacked cast; in fact, if anything, it’s too stacked. Quality performers like Gugu Mbatha-Raw, Adina Porter and Ian Gomez are shoved into the background and barely get a handful of lines combined in the first three episodes. There’s really far too much going on here: Alex also has a college-age daughter she’s struggling to connect with, and Bradley has a brother at home who’s a drug addict, but neither of those storylines carry any real resonance, at least at first. They just serve to clutter up an already cluttered series. 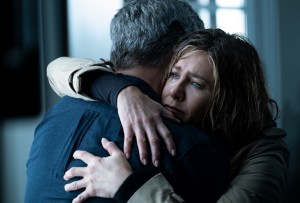 Aniston fares the best among the cast, though. She does get a bit too Rachel Green-y at times during the comedic bits, but Alex has far and away the strongest narrative arc on the show. She has wildly mixed feelings about replacing Mitch, who was a close friend of hers, and she also faces an uphill battle trying to cling to relevance as a woman growing older on television. Aniston infuses Alex’s story with genuine emotion, and reminds us what a gifted dramatic actor she is. But the rest of the show lets her down. It’s a solid performance lost in a sea of jumbled ideas and missed opportunities.

A final warning: If you stick around long enough to watch the second episode, it ends with a bizarre “twist” that makes absolutely no sense, from either a TV production perspective or an emotional character one. If I had any desire to stick with The Morning Show at that point — which I did not — that would have just obliterated it completely. Apple was clearly hoping to make a big splash with this star-studded series… but it ends up being more of a painful belly flop.