Halloween on 9-1-1 is always a scream, and this year was no exception. Monday’s episode found the men and women of the 118 making a number of haunting house calls, from to a twisted hit-and-run to a literal murder… of crows.

More importantly, however, the episode marked Buck’s first day back at the firehouse since waging war on the department. Hen and Chimney were quick to welcome him with open arms, but Bobby wasn’t feeling so friendly. And since the captain calls the shots, the tsunami savior found himself stuck on candy duty.

Of course, Bobby wasn’t the only firefighter giving Buck the cold shoulder. Eddie (aka Mr. Fight Club) was clearly still feeling the sting of Buck’s betrayal when he turned down his request for help with the trick-or-treaters. “No, you’ve got it,” he said. “You’re 100 percent. The lawsuit proved that, right?” Oof. The two hashed out their differences towards the end of the hour when Eddie finally asked, “Did you ever stop and think what it could do to us?” (And before you say anything, that “us” was referring to the 118 as a whole, much as we’d all like to think otherwise.)

Despite being sent home early, Buck still saw some action on his first day back when he came upon the woman responsible for the gnarly hit-and-run I mentioned earlier. And even though he received a shallow cut in the process, which could have become a serious situation given his medical condition, Buck emerged relatively unscathed. What’s more, Bobby decided to officially welcome him back to the team. 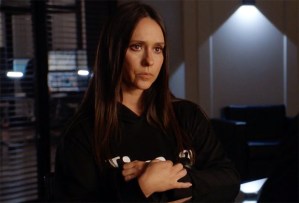 Maddie continued her long con with Tara, tricking her way into the unsuspecting woman’s home with a fake bathroom request. A few glasses of wine later, she was dropping subtle platitudes like, “There’s always a way out.” Unfortunately, Tara began to suspect foul play when she bumped into Maddie and Chimney on a date and he didn’t seem to have any idea that Maddie was working with a trainer. Tara’s suspicions led her straight to the 9-1-1 call center, where Maddie attempted to explain that she isn’t the deranged stalker that she appears to be.

And her problems are only just beginning. Upon receiving Tara’s formal complaint, Maddie’s supervisor took her off the floor pending a full psychological evaluation. As executive producer Tim Minear recently told TVLine, “Maddie’s trauma is far from over,” and the show clearly intends on addressing it fully.