There’s a moment in the fourth of episode of Netflix’s Daybreak when a barely recognizable Krysta Rodriguez clutches an enormous bowl of maggots, assigns a name to each individual squirmer, then proceeds to devour them all with a sickening grin on her gross (sorry!) face.

Sure, it sounds like the stuff of nightmares — and you’re not wrong about that — but it’s really just another day in the life of Ms. Crumble, a high school science teacher-turned-witch trying to make sense of a new, post-apocalyptic world where most of the adult population has been transformed into zombie-like creatures known as “Ghoulies.”

“When we meet her, she seems like a crazy person on the surface,” Rodriguez admits. “Just a wackadoodle nut bag. But as we come to realize, there’s actually a tragic situation happening here. She’s dealing with a traumatic brain injury from an atomic bomb, while also becoming part Ghoulie. She’s fighting this metamorphosis happening inside her body that’s telling her to eat people, as well as the part of her brain that’s desperately trying to be who she was before.”

Rodriguez — previously seen on shows like Smash and Trial & Error, as well as Broadway musicals like Spring Awakening and The Addams Family — admits that Ms. Crumble is the most original role she’s ever read, to the point where her first thought was, “OK, what am I going to do with this gal?” Fortunately, she says she “found a good balance” between the character’s outer eccentricity and inner turmoil.

Below, Rodriguez tells TVLine about the process of bringing this instantly unforgettable character to life, including the moment she knew that it was what she’d been waiting for her entire career. 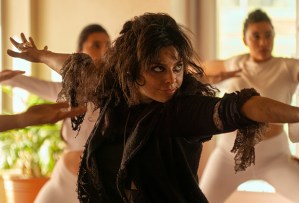 TVLINE | Let’s start with a fun one: What would you say is the grossest thing you had to do as Ms. Crumble?
You’d think it was eating the maggots, but really, the grossest thing was having to look at [Josh’s severed] finger. Stuff that’s hyperrealistic is hard to get my brain around. I also had to eat a lot of ketchup, and let me tell you, ketchup by itself is disgusting. It needs salt and fries and grease. And I had to eat packets of it.

TVLINE | There’s also the part where Josh has to reach down into your mouth, but I guess that was mostly CGI?
It’s actually not all CGI. They took a mold of my face and made it into a puppet, so it’s a practical piece. The tongue moves, the mouth opens and it was my face. It’s horrifying. It took me so my surprise. I felt like I was standing next to my own dead body. So Josh put his hand down the puppet, and I had to stand next to him making gurgling noises.

TVLINE | And then there’s Ms. Crumble’s teeth. Did those take some getting used to?
In the first and second episodes, we were painting the teeth. Between every scene, I would hold up a fan, they’d pour the crap into my mouth and they’d a paintbrush to paint it onto my teeth. We had to do that probably 45 times a day, which was terrible. And I was swallowing it. It’s mint-flavored, but you just don’t want that in your gut. By the third or fourth episode, they made me a tray of painted teeth. It was like Invisalign. It was great.

TVLINE | OK, I’ve asked enough about her physical appearance. What do you love about playing Ms. Crumble and the journey she’s on?
In the pre-apocalypse, she was a woman who didn’t get her say. And in the apocalypse, she gets to be everything. She doesn’t have to look or be a certain way. She can scream and yell and fight — it’s the person she never got to be before. In that way, it was very freeing. 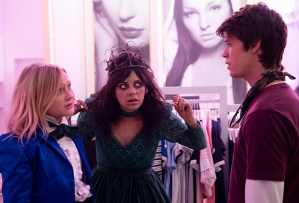 TVLINE | She also seems to forge a special connection with Angelica. Ms. Crumble, at times, feels like the mother figure she never had. It really hit me during that scene in Episode 4, when she tells Angelica, “Let’s be monsters.”
There’s this really beautiful, nurturing relationship between them, and that scene hit me. I’ve played a lot of characters, and I felt like I was getting stuck in a place where I was playing the smartest woman in the room who just rolled her eyes at the men who were doing silly things. My function was always to be the girl to the boy, and I was getting frustrated with that. I never imagined that this apocalypse show about high school kids would be the show that broke that streak in such a way. When I was reading [Episode 4], I was like, “Here we go with a makeover story. Let’s not let the witch be who she is, let’s make sure she gets a makeover.” All these other people are fighting, and here we are stuck in the mall getting makeovers. Then I actually read the scene… and I burst into tears. This is what I’ve been waiting for my whole career, this moment where I get to say, “F–k that. Let’s be loud.” And it’s what I want to tell the 12-year-olds in the world. Get loud, get dirty and play hard.

Are you enjoying Daybreak? Drop a comment with your thoughts on Netflix’s apocalyptic romp below.