Thanks to one particular scene in Castle Rock’s sophomore debut, we’ve indefinitely lost our appetites for ice cream.

Season 2 of the Hulu anthology stars Lizzy Caplan (Masters of Sex) as a younger version of Annie Wilkes, the mentally unbalanced nurse who first appeared in Stephen King’s novel Misery (and was later portrayed by Kathy Bates in the 1990 film adaptation). The season’s first three episodes dropped on Wednesday, and a sequence near the end of the premiere — in which Caplan’s Annie murders her landlord via ice cream scoop — proved especially chilling.

“I love that moment,” Caplan admits to TVLine. “That was the moment when I first read the script that I was fully sold — just the way that it was described.”

The premiere finds Annie and her teen daughter, Joy, temporarily staying in Castle Rock after a car accident leaves them stranded there. Annie is currently on the run from the law — it becomes clear that she murdered someone years ago, though details remain fuzzy in the premiere — and she’s been road-tripping through the United States with Joy for years, changing her license plates at regular intervals and keeping a low enough profile to elude the FBI.

But Annie’s landlord in Castle Rock, Ace (played by House of Cards’ Paul Sparks), learns the truth about Annie just a few days into her stay. When he shows up in her apartment one night — not only to reveal that he knows her identity, but to blackmail her and Joy into keeping his own secrets for him — Annie snaps. She gives Ace a firm kick in the groin, then shoves the ice cream scoop down his throat, repeatedly pounding it further down his windpipe until he chokes to death. (In Caplan’s opinion, the post-production team “totally nailed” the scene’s sickening “crunching noises.”) 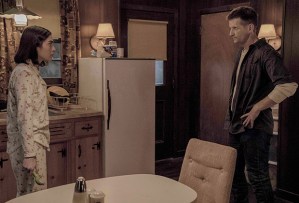 The murder marks Annie’s first big breakdown of the episode, even though she’d just been prescribed a new cocktail of anti-psychotics shortly before killing Ace. Without her pills, Annie starts to hallucinate gruesome things, including flashbacks to the night her first victim was killed — but it may have come as a surprise to viewers that Annie would harm someone even while medicated.

“There are many things that are constantly going on with Annie that we have to navigate. Some of the more violent outbursts — they’re not direct results of her not taking her pills,” Caplan clarifies. “Some of them are, but there are other things in play. In this particular moment, she needs to protect her daughter, and she is singularly focused on that pain. She will do anything to protect her daughter. Pills aside, I think the result probably would have been the same.”

And if you found Ace’s murder difficult to watch, Caplan confirms it was equally unsettling to film — especially since that was the first scene she shared with Sparks.

“We met on that set, and then we had to get into the completely insane moment while we were both… figuring out how we’re playing these characters,” the actress reveals. “It could have definitely not worked out as well as I think it worked out.”

Caplan adds that she was legitimately worried about harming Sparks and the stunt team during filming, considering “you are sticking this device into somebody’s throat,” even though the ice cream scoops used during production varied in length.

“When Annie is hammering it home, that’s a little daunting. Even though we try to make it as safe as possible, I’m pretending to hit this thing, and it really is in a real person’s mouth. It’s right there,” she shares. “The last thing you want to do is seriously injure somebody on the first day. We saved most of our injuries for later in the season.” (With reporting by Kimberly Roots)

What did you think of Castle Rock‘s return (and that insane ice cream scene)? Grade the premiere in our poll below, then hit the comments with your full reviews.