Monday’s 9-1-1 may have ended on a hopeful note, but it sure took some heartbreaking detours along the way. Much of the episode focused on a crisis for Athena’s family, as Michael was pulled over by two white police officers, one of whom even drew his gun on Harry — a terrifying, chaotic scene that May filmed on her phone.

“Lyndsey Beaulieu, who’s new to the staff this year, pitched that story herself,” executive producer Tim Minear tells TVLine. “She’s a black woman, and it was a story she felt strongly about. It also hit a sweet spot for me. It was a great way to get Michael back into the show, and it was a great way to explore a relevant question in a balanced and sensitive way. It just felt right. Also, the theme of the episode is rage, so it allowed us to explore Michael’s rage as he felt humiliated and helpless in protecting his children from the people who are supposed to helping him.”

Despite the trauma inflicted upon her family, Athena attempted to quell their concerns about the “bad stop,” telling them, “It’s not as simple as ‘pick a side.'” She later confronted one of the officers in question, pulling him over and giving him a (very small) taste of what he put Michael through. Meanwhile, Michael sat Harry down for a lesson about how he should conduct himself around police officers, some of whom may treat him differently because he’s black. 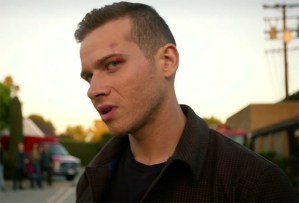 Elsewhere in the episode… Buck was reinstated, mostly because the department didn’t want to deal with the lawsuit; Lena introduced Eddie to an underground fight club, offering him an outlet to release his aggression; and Hen and Karen suffered a setback in their IVF process, as all six of their embryos were deemed unusable.

Below, Minear answers a few of TVLine’s questions about those developments:

TVLINE | This lawsuit changed everyone’s perceptions of Buck. How long will it take for things to return to normal?
Everyone will have to take a beat. There will be some adjusting to do. It’ll take Bobby a second to get over it, but in the end, they are what Buck said they are — they’re family.

TVLINE | Only a second for Bobby? After the way Buck exposed his relapse, I feel like he was especially betrayed.
You can tell from Buck’s reaction that he was really not expecting that to be brought up, but that was definitely a low blow.

TVLINE | Was there any temptation to stretch this out longer than two episodes for dramatic effect?
Honestly, no, not really. We’re not L.A. Law. [Laughs]

TVLINE | I’m also sad about Hen and Karen’s latest fertility hurdle. What does the future hold for those two?
They’re going to discover that families can work in surprising ways. Maybe the answer to their questions and dreams is going to be a left turn someplace. It’s not going to be the thing that necessarily they planned.

TVLINE | And then there’s Eddie. Is this fight club the solution to his problem, or is it the start of a whole new problem?
I definitely would say it is not the solution. [Laughs]

TVLINE | At least he looks pretty confident in the ring.
I don’t know if you know this, but [Ryan Guzman] actually does that. He’s an MMA fighter. It’s a serious sport, and he is a practitioner of that sport.