If the title of the show weren’t already a clue, let’s get something straight about the Why Women Kill season finale: There’s a whole lotta death.

The CBS All Access dramedy — which has already been renewed — wrapped up its first season on Thursday, after weeks of teasing us about which characters would ultimately kick the bucket. (If you predicted Jade, Karl, Rob and Ralph as the finale’s victims, you might want to splurge on a lottery ticket soon.)

Before you give us your thoughts on the episode, let’s recap what happened in “Kill Me As If It Were the Last Time”:

BETH ANN | The finale begins in 1962, when Beth Ann and Rob are first touring the Pasadena mansion. Beth Ann is surprisingly candid with the realtor about the loss of their daughter, and Rob pulls her aside, begging her to stop telling strangers about that tragedy. Beth Ann insists they don’t need a new house right now, but Rob counters that he wants a fresh start after what happened to Emily. If Beth Ann will let Rob buy this house for them, he’ll spend every day trying to put a smile on her face — “the one I fell in love with.” Ugh, Rob.

Then, we’re back in ’63, and an extra-chipper Beth Ann informs Rob that she bought a revolver, lying that there’s been a rash of robberies in town and she wants to defend their home. She’s even loaded the bullets already, to save time in case someone breaks in.

Soon enough, we find out what Beth Ann is really up to: She’s concocted a plan for her and abused neighbor Mary to kill their respective husbands. (And she delivers that news to Mary with the sunniest of smiles on her face!) While both men are at work, Beth Ann gets the ball rolling. It all starts with a letter that Mary leaves for Ralph to find that evening, informing him that she’s unhappy and plans to leave him for Rob Stanton, who loves Mary better than Ralph ever could. But more on that in a minute.

TAYLOR | Once Eli is discharged from the hospital, he and Taylor head home, and they agree to make some changes: They’re going to sell their house and downsize for a bit, and they have no plans to include any new lovers in their marriage for a while. (This seems wise. And overdue.)

But when they get back to the house, they find Jade (and Teacup!), who is cooking dinner as if nothing ever happened. Taylor and Eli ask her repeatedly to leave, but Jade quickly becomes manic, refusing to go unless Eli pays her $10,000 from the sale of his script. Then, while Taylor and Eli are in a different room discussing how to proceed, Jade makes her escape; she’s not in the kitchen when Taylor and Eli go back in, and they call the cops when it looks like she’s fled the house. Meanwhile, a different set of cops shows up a few minutes later, looking for intel on who might have killed Duke — and Taylor and Eli have a pretty good idea who it was.

At the cops’ suggestion, Eli and Taylor decide to stay in a hotel for a few nights, and they frantically begin packing some suitcases. They’re assuming that Jade is far away from their house at this point… but more on that in a minute. 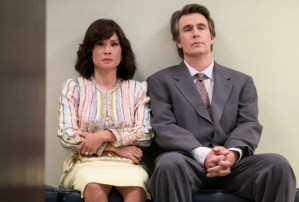 SIMONE | Meanwhile, in the ‘80s, Naomi is preparing to hit Simone with her car in the hospital parking deck. But just as she’s revving the engine, a freshly discharged Tommy appears in the deck, and he pushes Simone out of the way seconds before his mother’s car makes impact. Naomi is a little banged up, but she survives the crash, and a very forgiving Simone decides not to press charges — and she’s only a little thrilled to learn that Naomi’s friends have ditched her after realizing she’s nutty.

After getting released from the hospital, Tommy offers to stay home instead of traveling to Paris, promising Simone that he’ll help her take care of Karl. But she’s adamant that he should go on the trip and have the time of his life, and they say a very sweet goodbye. “I’ll think of you constantly. I love you,” Tommy tells her, to which she replies, “I won’t be the last woman you say that to, but I’m proud to be the first.” Aww, you guys!

We then jump six months in the future, and Simone — with a new ‘do! — reveals that Karl’s art gallery went under, causing them to lose their health insurance. Since Karl’s medical expenses haven’t eased up at all, the pair is struggling to make ends meet, and Simone is selling a lot of their belongings to get some cash. Still, she remains optimistic… even when she discovers that Karl planned to overdose on sleeping pills and end his fight with AIDS earlier than planned. She begs him not to cut their time together any shorter than it already is, but he has a different perspective on the situation.

Karl then asks Simone to accompany him to the hospital, where he’ll be attending a birthday party for an AIDS-afflicted friend who recently had a setback. Simone is happy to go with him, but upon getting to Jimmy’s hospital room, she realizes the man is unconscious and supported by a breathing tube. The friends and family members gathered around his bed are cheerfully talking to him and leaving his current health status unacknowledged — but Simone is unable to slap on a smile and sing “Happy Birthday” to Jimmy, opting instead to leave the room in tears. Karl follows her into the hallway and reveals that he wanted her to see Jimmy in that state, in the hopes that she’d finally get why Karl wants to end his life on his own terms. She nods in understanding, and the next day, Karl presents her with a syringe and a vial of liquid that will kill him once injected.

But Karl’s got one last surprise for his wife before she carries out his death wish: He asks her to put on a red gown he once bought her in Venice, then requests that she meet him downstairs. Simone does as she’s asked, and Karl reveals that he wants to have one last dance with her. “A tango,” Simone smiles. “What else?” Karl replies.

At this point, all three of the show’s plots converge in a very cool way: As Karl and Simone dance around the first floor of their house, Beth Ann and Taylor’s storylines take place in the same location. Of course, none of the characters from different time periods ever see each other or interact, but the action unfolds with Simone, Beth Ann, Taylor and their respective spouses all standing within feet of each other, uniting the one house that all three of these couples have lived in over the years.

Simone and Karl, for their part, spend the next few minutes dancing a fantastic, ultra-passionate tango — but it’s cut short when Karl suddenly doubles over near the staircase. Understanding that Karl can’t go on much longer, Simone takes him to their bedroom and presents him with the syringe, ultimately injecting it in his arm when Karl is too nervous to do it himself. She curls up by his side as he passes away, then places one last kiss on his lips and I WAS NOT EMOTIONALLY PREPARED FOR THIS TODAY.

Meanwhile, when Rob gets home from work, Beth Ann gets him a little tipsy on martinis and strikes up a conversation about the day their daughter died. Rob looks totally uncomfortable, especially after Beth Ann insists that she absolutely locked the red gate when she got home that afternoon. But when Beth Ann begs Rob to share any other helpful details from that day, hoping to get him to confess to his infidelity, Rob denies that he has anything to reveal. “Thank you,” Beth Ann replies. “You’ve made all of this so much easier.”

Across the street, Ralph gets home from work and finds the letter that Mary left for him, and he’s expectedly furious. He grabs his loaded gun from the bedside table and heads over to the Stantons’ house, which is exactly what Beth Ann was hoping he would do. (This plan is briefly derailed by the arrival of April, who has since found out that Beth Ann isn’t really “Sheila” and goes to the Stantons’ place to confront her. But her presence ends up helping the plan more than it hurts, so, yay?) 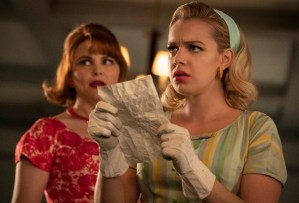 Ralph barges in and aims his gun at Rob, who slaps it out of the man’s hand. They fistfight for a while, then Beth Ann tosses Rob the revolver that she’d purchased earlier that day. Rob catches it and points it at Ralph… but when he pulls the trigger, nothing happens. He realizes the chamber is empty, and he looks up to find Beth Ann giving him an absolutely devilish smirk, silently confirming that she took the bullets out of the gun before she threw it to him. This pause gives Ralph enough time to pick up his own revolver and fire several shots at Rob’s chest, killing him. (And we later learn that Ralph gets executed for committing this crime, so, y’know, win-win for the wives.)

Last but not least, while Taylor and Eli are packing for their hotel stay, Jade emerges from a closet in the house where she’d been hiding, holding a kitchen knife. She stabs Eli right in the gut when he comes downstairs to pack his laptop, then heads upstairs to do the same to Taylor. But Taylor turns around just before Jade can hurt her, and the women end up duking it out all the way into the hall and down the staircase. Despite getting thrown halfway down the stairs at one point, Taylor gets the upper hand: She finally clutches the knife and drives it into Jade’s stomach, killing her quickly. (Even better: Eli ultimately survives his stabbing! Woo!)

In the finale’s last scenes, these three different time periods briefly overlap. In 1974, Simone pays a visit to the Pasadena mansion after buying it, and Beth Ann (donning a ‘70s wardrobe and hairstyle) greets her at the front door and gives her the keys to the house. Beth Ann is all too pleased to reveal that her husband was murdered there a few years ago, and we learn that Beth Ann has helped raise April’s child, Elsie. Now, the three gals are moving to New York City so April can begin her Broadway career.

Then, in 2017, Taylor and Eli meet an elderly Simone for the first time so she can give them the keys to the house. Simone — still fashionable as ever, even in a wheelchair — shares that she had a very rich life, once she stopped worrying about money, and it’s revealed that Tommy went on to become a famous artist.

Finally, in 2019, Taylor and Eli hand over the house keys to a new couple that’s just moving in. They’re a young, sweet, happy-looking pair… until the boyfriend gets a sexy text from a side chick he’s been cheating with. His girlfriend sees the message, and not two minutes after Taylor and Eli have left the house, the woman grabs a rifle from her beau’s extensive collection and shoots him as soon as he comes back in the room. (And now we know why women kill!)

OK, your turn. What did you think of Why Women Kill’s season finale? Grade it in our poll below, then hit the comments with your full reviews.