Hope Mikaelson (whoever that is) found herself in familiar territory on Thursday’s Legacies, in which she hunted a troll — or what she thought was a troll — through the hallowed halls of Mystic Falls High School.

She was joined by the new bearded principal, who wasn’t about to let a defenseless young girl face a big scary monster all by her lonesome. I just about died when he said, “If you are a vampire hunter, then I’m sure you’ve heard of Alaric Saltzman?” The ego!

Once Alaric saw Hope in action, however, he realized he completely misjudged her — just as they both misjudged the “troll,” which actually turned out to be a cyclops. Maybe if there had been a barber trapped in Malivore, the cyclops could have trimmed the hair covering its eye, and this whole misunderstanding would have been avoided. Just something to think about.

The battle concluded in the town square, mere yards away from Landon, who had the volume on his headphones turned up too high to notice the giant monster exploding behind him. (It’s a good thing that boy is set on auto-revive, because he does not have a good sense of his surroundings.)

Hope and Landon eventually came face to face, but it wasn’t exactly the romantic reunion fans have been hoping for. Instead, the two commiserated about their respective relationship woes; she even used his own advice (“Sometimes you have to be brave enough to be imperfect with people, even if it’s scary”) to help him fix his situation with Josie. And when he told her, “You’re going to have to take your own advice and tell that boy of yours that you exist,” I felt that.

The conversation also had a rough effect on Hope, who later broke down in front of Alaric and told him exactly who she really is. 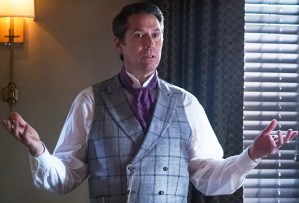 ‘THE FUTURE IS SUPERNATURAL’ | This week’s episode introduced us to Headmaster Vardemus (Angel‘s Alexis Denisof), who emboldened the students of the Salvatore School to embrace the Spider-Man way of life: “To whom much is given, much is required.” (OK, he words it a little fancier than Spider-Man, but you get the point.) In his opening remarks, he asked — nay, required — the students to be “better than humans ever could, because the day is coming when we will step out of the shadows.” Jolly accent and phenomenal wardrobe aside, the guy came off like a real hard-ass. So when he caught Josie inflicting a magical bloody nose upon one of Landon’s (many) flirty admirers, I was sure he’d punish her accordingly. But in a stunning display of multidimensionality, he taught her how to do the same spell without getting caught, then invited her to take part in a special offensive magic curriculum for “advanced students.” (Side note: Do we trust this guy? Between his supes-vs-humans speech and his shady mentoring, I feel like there’s trouble brewing.) 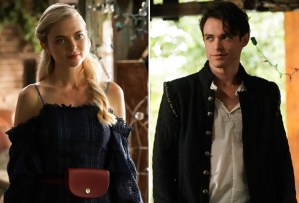 ‘YOU’RE DRAWN TO ME, I’M DRAWN TO YOU’ | Thursday’s episode also gave us our first taste of Descendants‘ Thomas Doherty as a smoldering new vampire named Sebastian, who met Lizzie in the Old Mill while she was waiting for MG to join her for a study date. (Part of Lizzie’s “year of yes” meant agreeing to appease MG’s advances.) She was immediately into him, though he warned her not to get too close, because his life is “complicated.” (Oh, really, guy? I’ve got two words for you: Gemini. Coven.) But it was clear from their second meeting, complete with candles and dreamy music, that this is the beginning of something special. (When he called her “Elizabeth,” I pretty much melted.) Unfortunately, Lizzie falling head-over-heels for Sebastian meant that MG was due for some major heartbreak. When he realized that he unwittingly helped Lizzie locate Sebastian after their first meeting, he was clearly devastated. But because he’s just too damn nice for his own good, he simply replied, “It was really nice to see you happy today.”

‘WHO’S STALKING WHO HERE?’ | During Hope’s investigation into the cyclops, she met Maya (The Fosters‘ Bianca Santos) and Ethan (Why Women Kill‘s Leo Hard), the children of Mystic Falls’ new town sheriff. Maya lent a sympathetic ear when she found Hope crying in the bathroom, while Ethan naturally assumed Hope was into him because she happened to cross his path twice in one day. Either way, something tells me these two are going to make Hope’s more interesting — which is saying a lot for someone who slaughters supernatural baddies on the daily.

Your thoughts on this week’s Legacies? Are you already ‘shipping Lizzie and Sebastian? Do you trust the new headmaster? And who’s the mysterious robed figure who carved that spooky symbol on their latest victim? Whatever’s on your mind, drop it in a comment below.